I have been excited about Overwatch since I had first heard of it. Originally, I was attracted the most to Winston. What’s not to love about a giant moon gorilla? But, when I first started playing when it was available outside of the beta, I started to love it for even more reasons. Not only is it a great game, but it also has great gender representation and body diversity. 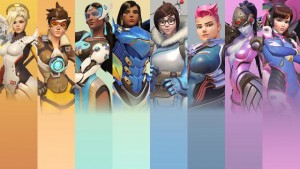 When looking at the women in Overwatch, players can see just how diverse they are. To me though, just looking at the characters, I’m most attracted to Zarya. Her bright pink hair as well as her muscular body type make her stand out to me in a good way. She looks unlike most other female video game characters that I’ve seen before. She’s obviously strong and neither terribly feminine nor masculine. This shows me that Blizzard is thinking outside of the box when designing characters for the game.

Looking at the other characters, we see more diversity. Pharah, Symmetra, Mei, and D.Va are all women of color. The characters also each have their own style. While Widowmaker’s costume flaunts her sexuality, Pharah’s prepares her for combat.

Regarding Widowmaker, we can see a few things. There’s clearly a preexisting trend of characters dressed like her. However, I really don’t think this is as problematic as it is in other games. If Widowmaker was the only female character, that would be an issue. She isn’t though. She is one character in a wide range of characters. She (and the other characters, for that matter) is fulfilling a trope, but players have multiple options available to them. She, like all the other characters, is a badass that has cool abilities. She is also dressed sexy. Not all of the female characters are dressed super sexy though.

This all has to do with options available to players. It’s not an issue when a character is sexy. It’s an issue when every character is sexy. This is even true with game trends as a whole. One game with all super sexy women (as long as it’s not done in a degrading way) isn’t an issue, but when it seems like all game have the exact same women in them while there are a wide variety of male character, there is an issue. Representation matters in games, as it does in all forms of media.

After the beta test of the game, a Tracer victory pose with lots of butt was added. Someone said on the Blizzard forums that the pose didn’t really fit Tracer’s character. This is true. An over-the-shoulder ass shot for Tracer is far different than one for Widowmaker. She’s a playful character, and the ass shot isn’t a good fit for that. Also, as fellow Project: Derailed writer Tom would say, do we really need to see more cartoon butts?

Blizzard agreed that it was out of Tracer’s character and they were never terribly happy with the pose to begin with. So, they replaced the pose with something else. This of course caused mass chaos. Blizzard was accused of bending to the will of feminazis. Accusations of people being SJWs were thrown around, and, as we all know, once this happens, it’s time to abandon ship because nothing constructive can come of the conversation after that point.

One of the biggest arguments against removing it was that male characters as well as Widowmaker also had the same pose. This argument doesn’t really work, however. We have established that Widowmaker is the highly sexual character, so the pose makes sense for her (and this was the the original poster’s point in the first place). And, when compared with the poses of the male characters, it’s coming from a completely different place. Tracer’s pose is more sexual. Her hip is cocked and the intent is clearly sexual. However, when we compare this to Hanzo or McCree’s poses, they are doing the pose in an angsty or powerful way. Their outfits don’t even really show much of their body shape. They wear loose clothes and McCree has his poncho over his butt as well.

Moreover, men and women are not created equally when it comes to objectification. The patriarchy makes men fairly privileged in that they are not often hyper-sexualized in the media. That’s not to say that men do not have body issues or objectification, but the situations are different in this scenario. 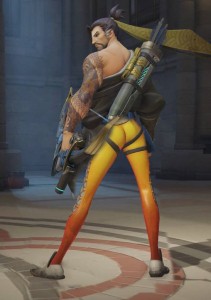 However, my excitement for the diversity in the game is not entirely shared. In an article published by Medium, Ayla Arthur argues that “

[w]hile the men seem to have varied body types, all of the women seem to be rather cookie-cutter. As one commenter puts it, ‘These women are all pallete swaps of each other.’ They all still have the same proportions: large chest, small waist, generally younger, with a fit-figure and slender legs.”

As you can see, this is a fairly accurate statement. However, this article was published in 2014 and oddly doesn’t include any commentary on Zarya. This leads me to believe that she wasn’t included at the time. But, even so, the vast majority of the characters do look fairly similar. While D.Va in her Mech is probably the biggest woman while Mei is probably the smallest, the point remains. The male characters include robots, cyborgs, animals, and humans with a much wider variety of sizes and shapes. I still love the game and characters, but there is still some of amount of discrepancy.