Do you want to get started as a new DM and aren’t sure how? Are you an experienced DM whose game is lacking a certain je ne sais quoi? Don’t worry, we’ve got you covered. Here are 10 DM tips you need to know RIGHT NOW:

1. Have a powerful NPC travel with the party at all times

You should create a powerful NPC at least three levels higher than the rest of the party, and multi-classed to make sure no magic item found by the party will go unused. Use this NPC to steer the party in the direction of your adventure, whether they like it or not. Remember, you spent hours prepping your poorly concealed Lord of the Rings knockoff, and it is your players’ solemn duty to follow Gondolph the Maroon wherever he leads them.

Advanced Tip: Remember, for the sake of realism, this NPC is a person with their own wants and desires. These desires should include a “fair” portion of the party’s treasure, especially the aforementioned magic items.

2. Kill the character with the longest backstory

In most parties, there will be one player who is the most excited, and you can tell this by the long backstory document they send you. In the first session, make sure to target and kill this character as quickly as possible. Good stories establish their gritty realism by killing their most interesting characters as early as possible. If it works for Game of Thrones, it will work for you.

Your game should teach the players the valuable lesson that the world is an unexpectedly cruel, cold, ruthless place. Put monsters far beyond the party level directly in their path, and give the players no warning of the danger at all. Make sure that once the party engages, there is no easy path to escape. Your goal is to keep the players on their toes by killing at least one PC each session – otherwise you are coddling them with a boring Monty Haul game.

4. Unless the players say it, they didn’t do it

Whenever a player says something, make sure to interpret it literally to avoid any possible confusion. If a player says they swing their sword without mentioning they draw it first, then they rip the sheath off their belt and swing the whole thing. If a player does not mention putting pants on in the morning, everyone at the inn laughs at them when they come downstairs. If they neglect to feed their animal companion, it will die or run away in the night. Handwaving simple activities will destroy immersion and ruin your game.

5. Pick one PC to be the Chosen One

Whichever player you personally like best should be made central to the adventure, and get all the coolest quest hooks and magic items. Tie that player to all the great cosmic conflicts in your world. This will help the party relate to its place in your grand worldbuilding adventure. The Chosen One will have a great time, and don’t worry about the other players – they will feel special by association.

Advanced Tip: Have your NPC from tip #1 be the Chosen One in order to maintain total control over the player experience.

6. Require a skill check for every task, no matter how trivial

In real life, people walk into doors, fall down stairs, and fail tying their own shoes every day. Model this in your game by requiring a skill check for every activity imaginable. Remember too that a natural 1 is always a chance for a hilarious and embarrassing failure, regardless of the character’s skill modifier.

7. Use the same voice and mannerisms for all NPCs

Cultivate a character voice that sounds monotonous and slightly condescending. All characters should speak mostly in standard American English, except for the occasional turn of phrase you throw in to establish a vaguely fantasy feel. By using the same voice, you will be able to ensure a consistent experience for your players across play sessions. 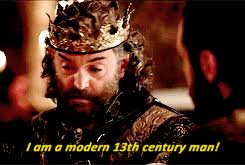 8. Don’t let players get in the way of your story

Your players will sometimes have ideas of their own. Don’t worry, the tips from earlier in this article will help minimize the likelihood of this happening. In the case that a player does have their own idea, step on it as quickly as possible to maintain the integrity of your game. You can prevent player creativity by quickly and aggressively punishing it with terrible consequences, up to and including character death.

The most important thing in your game is that you know the name of every shopkeep across a fictional supercontinent. It is absolutely imperative that you fully detail your world before you have any hope of running even a single effective session. Your players are there to poke holes in your fictional world, so make sure you can answer every question they might have without ever having to (god forbid) improvise and make up a detail on the spot.

10. If things don’t go your way, flip the table

If things get out of control, it is entirely within your prerogative to flip the table over, gather up your scattered supplies, and go home. Just like in grade school, the mature thing to do when you can’t win is to take your ball and go home. Find new players who can appreciate your brilliant world, characters, and story. Those players don’t deserve you.

Advanced Tip: You can also have the Tarrasque appear from nowhere and smash the party whenever you feel that their fun is wrong.