Project Derailed is excited to announce the premiere of the third chapter of Tales of the Voidfarer.

What is Tales of the Voidfarer, you ask? Great question!

Tales of the Voidfarer is an actual-play Spelljammer-inspired podcast. The story takes place on the ship The Voidfarer. Luckbeak, the dohwar rogue; Marco, the human wizard; and Rav’nys, the githyanki fighter; investigate the mysteries of the lost Kraatorian empire, discover powerful magic, and combat rival factions. Our Dungeon Master, Nick Uroseva (@nick_uroseva) leads our intrepid players on their adventure.

While our first two chapters are available for listeners, the beginning of chapter three is designed as a starting point for new listeners. It’s the perfect place to give our podcast a try if you haven’t already been following Luckbeak, Marco, and Rav’nys on their adventure. This guide will supplement chapter three, episode one to catch listeners up on the story so far.

Follow us on Twitter, Instagram, and Facebook. You can find all current episodes here, and also listen on iTunes, Stitcher, Spotify, or wherever you listen to podcasts. Voidfarer merch is available on our RedBubble store.

Spelljammer is a Dungeons & Dragons campaign setting. Though it has elements of DnD’s classic swords-and-sorcery-style fantasy, Spelljammer is a science fiction setting. Players in this setting explore the stars. By using magical “spelljamming” helms equipped aboard ships, player characters can navigate through this outer space setting contained within massive crystal spheres. While there are elements players will find familiar, Spelljammer provides a different twist on the classic game. 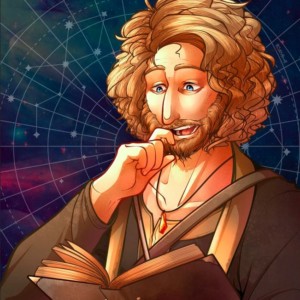 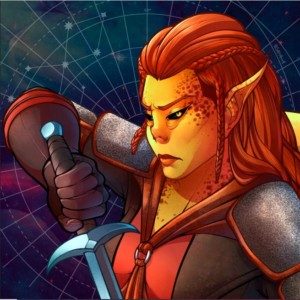 Luckbeak is a gambling-loving dohwar rogue. He uses his charisma and wit to navigate his way out of (and sometimes in to) trouble. Easily the most sarcastic of the group, Luckbeak often takes the lead in social situations, which inevitably leads to hilarious results. When it comes to combat, Luckbeak prefers to look for another way out or more clues rather than fighting. On the Voidfarer ship, he is a deckhand and has become an impromptu babysitter for the crew’s younger members.

Marco is the party’s resident wizard. He is a human originally from Toril until he was magically transported into wildspace while on a research expedition. Since then, he has met up with his fellow party members, Rav’nys and Luckbeak, and taken on some of the piloting duty on the Voidfarer. Marco’s great passions are research and archaeology. Traveling has allowed him to indulge greatly in both. His unwavering optimism and excitement always allows him to have a bright outlook on their adventure even on their darkest days.

The most serious of the group, Rav’nys is a githyanki fighter with a mysterious past as a Pirate of Gith. Easily the most combat-adept, she often takes the lead in battle. However, when it comes to social situations, she prefers to let Luckbeak and Marco do the talking. Rav’nys is often deadly serious, and her blunt way of going about things is a constant source of frustration for Luckbeak. As a member of the crew, Rav’nys is one of the gunners.

Our adventure begins in the hold of The Stoic Gondolier, a Salvager’s Guild ship. The guild has a great deal of control in Kraatspace, a newly accessible crystal sphere (solar system) home to bountiful untapped resources like the magical mineral called cindershard that is exclusively found there. The guild is easy employment for adventurers, which is how our three heroes find themselves on one of their ships heading for N’Dir Anchorage a massive asteroid-like settlement in the outer orbits of Kraatspace that is actually comprised of millions of ancient shipwrecks rather than rock. Marco, holding on to mysterious metal cube, notice that it vibrates when it’s closer to two others on the ship: Luckbeak and Rav’nys. Being strangers to one another, none of them aren’t quite sure what this means. However, Rav’nys identifies the artifact as similar to illithid technology. From there, the party gets into a conflict with three others on the ship: Silence of Starlight (a tabaxi), Sir Braddoc Forthwright (a human), and Zillin Shadethicket (a gnome). After getting into an altercation, the ship nears its destination. Unfortunately, this is when the guild reveals that each passenger owes 50 gold for their passage on the ship–a price none of our heroes can pay.

As they’re leaving the ship, they are approached by a  half-elf woman who introduces herself as Val. She leads them, as well as two children from the ship–Riley and Adgar–through the port of N’Dir Anchorage. There, they get information from an ape-like hadozee using false cindershard conjured by Marco. They learn the hadozee scout was actually a member of the Zenith Syndicate, a ruthless crime ring lead by the mysterious figure known only as The Suzerain. Our heroes retreat into the Bilge Warrens of N’Dir Anchorage with the information the were after and join Val on the decks of her ship: The Voidfarer.

Rav’nys, Luckbeak, and Marco are assigned to positions on the Voidfarer crew. The information they gained earlier facilitates their first salvage mission, which leads them into an encounter with a beholder on a crashed spelljammer ship within a comet. They manage to trick the beholder into leaving the area and flee back to The Voidfarer. After getting back on the ship, Rav’nys recalls after the fact seeing an old gith within the comet- an strange sight to her as githyanki do not typically grow old. However, she isn’t sure if the dream-like vision actually occurred not.

Our intrepid heroes continue traveling through Kraatspace. They get to know their fellow crew members and settle in to life on The Voidfarer. Val calls Luckbeak, Rav’nys, and Marco aside to investigate a driftglobe found in their travels. Rav’nys reads the githyanki script around the driftglobe, activating it. There, they find a map to a githyanki stronghold. While this would normally lead to certain death at the hands of the githyanki, this fortress is likely abandoned for centuries and may have vast amounts of treasure. Val makes plans to travel to the stronghold and pays Luckbeak, Marco, and Rav’nys early for their previous salvage job.

After the battle, the crew is unhappy with Val. While some crew members are insistent that they aren’t looking to mutiny, the crew meets in secret anyway to discuss Val’s actions in the last fight. During this meeting, they inform Rav’nys, Marco, and Luckbeak that they have received special treatment on the ship. They get paid before the other crew members and are the first to be informed about their next mission. The three aren’t sure about why this is. Luckbeak is the most angered of the three about Val’s actions.

When they arrive at the fortress, Luckbeak, Rav’nys, and Marco along with a few crew members make their way into the stronghold. They have difficulty navigating the githyanki traps. However, as suspected, the fortress does appear to be abandoned but appears overrun with swarms of mindless flesh creatures that are psionic in nature. They make their way through the traps and tests of the fortress and find a group of warforged stuck in the labyrinth of the stronghold. While fighting the monsters and making their way through the traps, Rav’nys falls unconscious. She, Marco, and Luckbeak witness mysterious glyphs appear on their foreheads. Everything around them fades as they feel a strong connection to one another. Marco is able to use this connection to give some of his vitality to Rav’nys, reviving her.

Working with their new forged allies, they explore and start to make their way out. However, blocking the exit is the skeletal remains of an ancient red dragon with a swollen pulsating brain: the source of the flesh monsters. Unable to fight the creatures under the dragon brain’s control, Rav’nys and Luckbeak attempt to reason with it. Rav’nys manages to convince the dragon that its revenge on the githyanki is best served by traveling elsewhere rather than staying in the fortress. The dragon’s mind seems fractured and does not know that it is unable to leave. While it tries to fly away, the forged and the Voidfarer crew escape.

The forged take the Voidfarer crew to their creator chip, The Ark of Siberys, to reward the crew for helping them. As they travel through the gargantuan ship, they pass through a bazaar and get a glimpse of constructfolk society. While waiting for the council to speak to them, a forged named Defect sits down with Marco. They discuss their research and projects. When the forged ambassador arrives to fetch the group, they reveal that Defect is The Grand Maker, the only forged in their ranks capable of creating new individuals. They crew meets with the council and are rewarded with magical artifacts and a great sum of gold.

When they get back on the ship, Val answers Luckbeak, Marco, and Rav’nys’s questions about why they are treated differently from the others on the crew. She explains that she received a message from her missing father telling her to look on the Stoic Gondolier. There, she found Luckbeak, Rav’nys, and Marco and recruited them. She is unsure what this means or why the three appear to be connected.

As Luckbeak is walking across the Voidfarer ship, a tiefling rigger named Odyssey hands Luckbeak a sending stone. The stone grows warm in his flippers, and Luckbeak hears the voice of the Suzerain (the leader of the Zenith Syndicate) in his head. The crime boss seems interested in striking a deal with the resourceful dohwar.[/fusion_builder_row][/fusion_builder_container]

Fiona L.F. Kelly is a writer, editor, and podcaster. She has published numerous articles about all things gaming and pop culture on websites all across the internet, was also a writer for Trinity Continuum: Aberrant 2e, and has been published in books and magazines. She is an editor for the pop culture and media website GeekGals.co. In addition to her writing and editing, she has also been a guest and host on several podcasts. She hosts the Project Derailed podcast Big Streaming Pile, produces and performs on Fables Around the Table, and plays the githyanki pirate Rav’nys on Tales of the Voidfarer. Buy her a coffee: ko-fi.com/fionalfkelly
Previous Post (p) S1E5 - Fiona and Tom Discuss The Open House
Share
Next Post (n) 3.1: Shore Leave