It’s no secret that Project: Derailed is run by a bunch of nerds.

Every month, we find cool stuff to watch, read, play, and/or generally obsess over, and, unfortunately, for one reason or another, these things don’t always make it into our posts. So, inspired by beauty bloggers, we decided to start doing “favorites” posts each month. These are all things that are very, very cool, and may become posts in the future, but, for right now, we’re just going to let you know what we’ve been nerding out over for the last month. 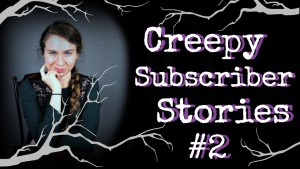 A friend introduced me to Cayleigh Elise’s YouTube channel after we had discussed the Elisa Lam case. As a true crime fanatic, I’m always looking for good podcasts or YouTube series that go in depth into crimes and missing person cases. Elise’s Dark Matters is succinct enough to watch in short bursts, but gives a lot of detail about each case and fully develops the theories in the video. Although there are currently only four episodes of this series, I’m excited to see more.

Her other videos on the channel as just as good as Dark Matters. Although many of them take a much less serious tone, she delves into the creepy and unexplained and regularly produces scary and interesting content.

Unfortunately, Rat Queens is currently on hiatus, but, even so, it is one of my favorite comic series. Rat Queens follows Hannah, Violet, Dee, and Betty, a group of adventurers/mercenaries who go by the same name. It’s written by Kurtis J. Wiebe and has been drawn by amazing artists Roc Upchurch, Stjepan Šejić, and Tess Fowler (who is also a Critter!). The comic has original and amazing characters. Although it would be so easy for the characters to fall into tropes or caricatures of themselves, they are well-rounded and feel real. They have all have big, different personalities, but the way in which they react to the environment around them feels natural.

Additionally, Rat Queens takes a lot of cues from everyone’s favorite tabletop rpg: Dungeons and Dragons. The plot is clearly inspired by the natural notes of a DnD campaign. Also, there’s an amazing Critical Role cameo. 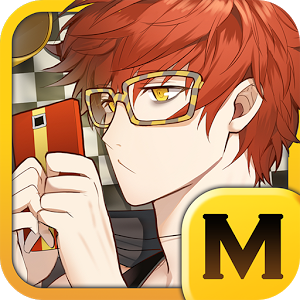 Mystic Messenger is a Korean otome game (a “maiden game,” AKA a dating sim). I’ve never played an otome game, but when all of my friends started obsessing over this one, I figured I’d give it a try. Full disclosure: when I started playing, I died in the first three minutes. I didn’t even know you could die in a dating sim, but apparently you can in this one. I had originally decided to play myself, but that lead to immediate death, so I decided to play along with what the game was asking.

Kotaku sums it up well when it says this is emotional labor: the game. The characters like it when you coddle them. I’m glad teenage me (when I was still going strong in my weeb/anime phase) didn’t have this game so I wouldn’t have thought that this is how you talk to people or this is the type of relationship a person should aspire to be in.

All that being said, the game is really fun if you look at it from the perspective of everything about it being ridiculous. The characters are so outrageous that they become almost entirely unrelatable, but that’s part of the fun of the game. This group of crazy people basically adopt you as their friend and give you more power the more you feed into their egos. You can play as the manipulator or the fangirl, and, eventually, a character is so wooed by you that start to play exclusively their storyline. This game branches quite a bit so you’re able to get multiple storylines, which ups the replay value. If you’re able to see the cringy dialogue as funny, then this game will keep you entertained for many hours.

/u/ItsADnDMonsterNow is one of my favorite novelty Reddit accounts out there right now. He takes random posts he finds across many popular subreddits and generates Dungeons & Dragons 5e statblocks for them, posting them in the comments of the original Reddit post that inspired it. For example, the stats inspired by the artwork above by /u/idoestheart26: 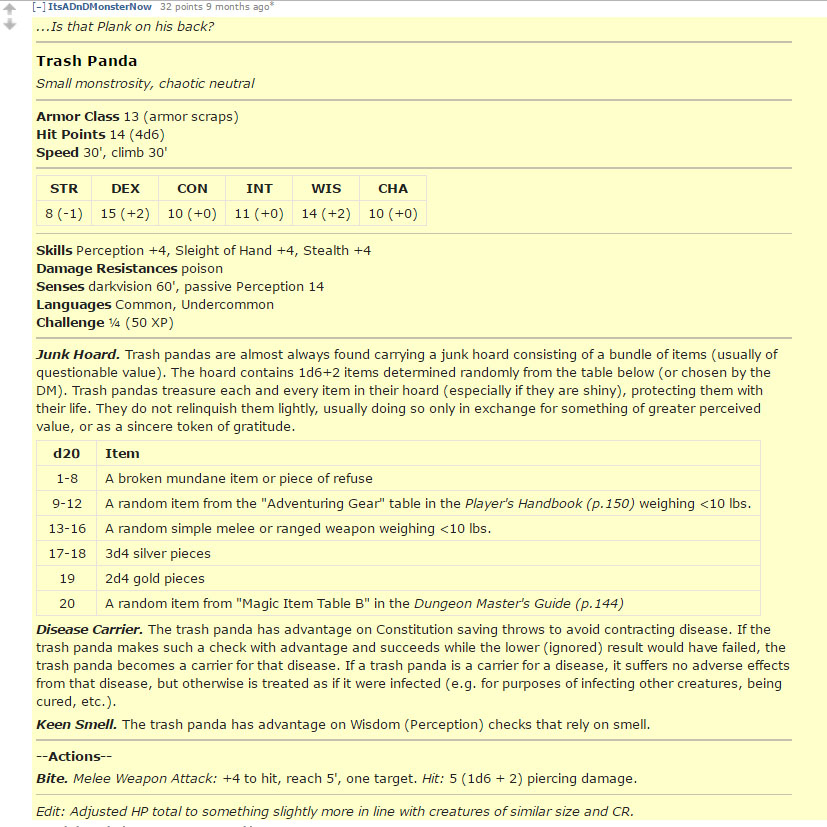 The user has created stats for a vast array of reddit post and comments from a funny GIF of an angry chicken with a cockney accent, medieval Batman, a Muscle Wizard, an Owlkin Gunslinger, Gremlin D.Va, to a whole forest that is actually one treant inspired by the forest Pando in Utah. He has also gone on to also create stats for magic items and some spells from many of the posts on reddit.

His monsters and stats are a fantastic example of all of the cool abilities that can be created for your Fifth Edition D&D game. So if you are ever in need of a new and different monster to throw at your PC’s you can always check out /u/ItsADnDMonsterNow’s work for lots of fun monster or even just for inspiration. You can find all of his creations on his subreddit, /r/ItsADnDMonsterNow or follow his Twitter account.

I’m still looking for the perfect opportunity to throw motherfucking Voldemort at my players. Just you wait… 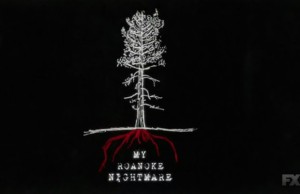 Well, I took some time to come up with my picks for this. I thought about downloading Mystic Messenger and giving it the ole college try. But it looks like Fiona beat me to it. At either rate, I decided to touch on a subject that I have attempted to shy away from as of late and that is the subject of television shows, in particular television dramas and horror. Unlike the other members of Project Derailed, I’m not a big television guy. I find myself watching my old favorites Firefly and Breaking Bad over and over again and then when I try something new like Stranger Things or Mr. Robot, I have the habit of being an old curmudgeon. But recently, I have found myself enjoying the latest season of American Horror Story.

Starring the awesomeness of Kathy Bates as well as the surprise appearance of Cuba Gooding Jr. American Horror Story: My Roanoke Experience is a fun and intriguing look at documentary style filmmaking as well as using one of the biggest mysteries in American history as the subject matter. I find myself captivated by the mystery, engaging in the characters, and completely forgetting when an episode features very little in the way of plot advancement thanks to the tight acting and amazing cinematography. This season is just now hitting its apex, but so far, I have been absolutely adoring my experience. 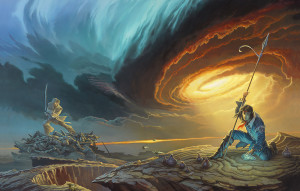 Brandon Sanderson is the best living fantasy author who has actually published a book since 2011. I am also personally a super fan probably beyond his strictly objective literary merit, which is already reasonably high. Sanderson is great about keeping his fans up to date on his progress, and he recently bumped up his Stormlight 3 rough draft bar up to 75%. He currently estimates that the book will be 450,000 words, which is longer than most ASOIAF books. He’s on track for just three years in between 2 and 3, plus he publishes other books in between installments of his huge epic. I’m not saying you should get mad at Martin or Rothfuss for how long their books take… but if you want an author who knows how to deliver the goods, hop on the Sanderson hype train.

Plus his short story collection (Arcanum Unbounded) comes out in November and it’s gonna be pretty great.

This isn’t particularly timely or hip or anything, but I’ve recently started listening to the Mountain Goats. The band is centered around singer-songwriter John Darnielle, and in fact a number of “their” albums are actually just Darnielle singing and playing guitar into an old tape recorder.

The impression the band gives off at first might be that of pretentious hipsters, but Darnielle’s music and lyrics have a surprisingly unpretentious style. His songs feel very immediate and honest. They tend to be short, and are typically focused on clear themes, stories, and ideas. He tends towards melancholy, but never in a way that feels forced or overly grim. If you like simple indie rock music, give the Mountain Goats a listen.

Fiona L.F. Kelly is a writer, editor, and podcaster. She has published numerous articles about all things gaming and pop culture on websites all across the internet, was also a writer for Trinity Continuum: Aberrant 2e, and has been published in books and magazines. She is an editor for the pop culture and media website GeekGals.co. In addition to her writing and editing, she has also been a guest and host on several podcasts. She hosts the Project Derailed podcast Big Streaming Pile, produces and performs on Fables Around the Table, and plays the githyanki pirate Rav’nys on Tales of the Voidfarer. Buy her a coffee: ko-fi.com/fionalfkelly
Previous Post (p) The Best and Worst of American Horror Story
Share
Next Post (n) Critical Role Recap: Episode 70 - "Trust"