Thar be spoilers! We will be discussing a huge revelation in the Marvel comics universe, so if you wish to remain unspoiled, make a trip to your local comic store, enlighten yourself, then come back to get our thoughts on this shit.

The new comic series from Marvel, Steve Rodgers: Captain America, kicked off today with its #1 and it is already causing a stir around the web.  Mostly for its earth-shattering reveal on its final page. 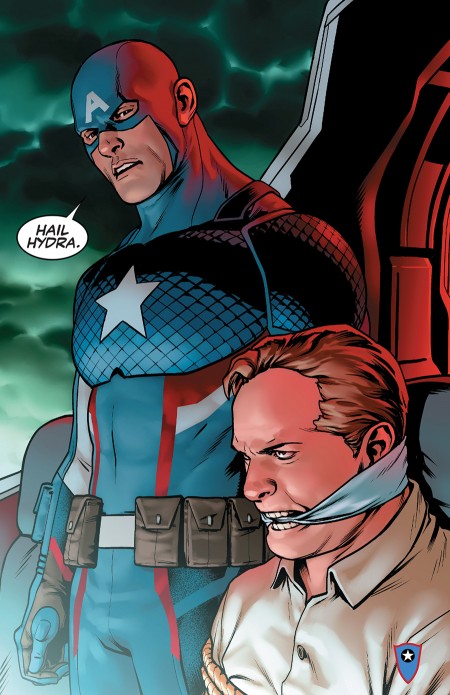 Captain America might wear Red, White, and Blue, but he apparently his true colors have just been revealed. The comic shows us that Steve Rodgers, Captain America, moral bastion, and symbol of good, is secretly a member of the nefarious organization, Hydra.

My first immediate thought on this was that its obviously going to be revealed that this was going to be an impostor, clone, Life Model Decoy, or the result of brain washing or some other form of mind control (all of which are par for the course for comics). However, in a recent interview with Entertainment Weekly, writer Nick Spencer and Marvel editor Tom Brevoort took care to dismiss all of these options, confirming that was, in fact, Steve Rodgers, acting of his own volition.

And the internet is angry.

Reactions have exploded onto social media expressing their displeasure with the reveal. “#CaptainAmerica, Marvel NOW, #SteveRodgers, and #HailHydra are trending on Twitter. Many fans are standing firm that Cap being a member of the Nazi-affiliated Hydra flies in the face of the very values Captain America stands for. The hashtag #NotMyCap is being used by many to express their rejection of this new canon.

As this is only the first issue of this new series we are bound to get more elaboration on this situation. Would Marvel really go so far as to change the fundamental values of one of its most iconic characters? Are there more, less-obvious, explanations yet to be revealed? Is this just an attempt to generate buzz by re-hashing of the twists of Captain America: Winter Soldier and Agents of S.H.I.E.L.D. season 1 with Cap himself? I guess we will have to find out. 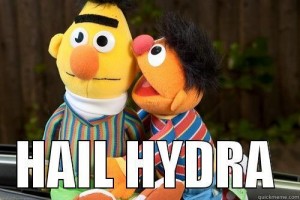 The jury is still out on Ernie, too.