Mild spoilers for Suicide Squad and Jessica Jones ahead!

When watching the new Suicide Squad movie, I couldn’t help but to compare the portrayal of Harley Quinn to Netflix’s Jessica Jones. While the characters in the movies are wildly different in terms in personality, they do have a major part of their plot in common: the abuse they suffer at the hands of another character.

For Harley, this is the iconic relationship she has with The Joker. It’s often romanticized, but, at its core, it’s a textbook abusive relationship. The Joker terrorizes Harley and uses her for his own gain. She is not as much in love with him as she is obsessed with him, often unable to tear herself away.

On the other hand, we have Jessica Jones and Kilgrave/The Purple Man. Particularly in the Netflix show, Kilgrave has mind control powers. He can compel people to do whatever he wants them to do. This created his relationship with Jessica. While under his control, like Harley, she often acted as his lackey, and the crimes she committed under his control form most of the main plot of the show. And, again like Harley, she was never truly in love with him, just unable to tear herself away. 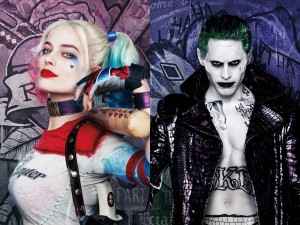 However similar character motivations may seem, there are major differences in how the abuse is shown in the film and the show. In Suicide Squad, The Joker is portrayed as cruel and unsympathetic, yet there is no real mention of Harley’s abuse. Instead, we simply see a snippet of her in the backstory “falling in love” with him and allowing him to escape while he is under her care. The filmmakers simply chose to let it be that he used her and she went from a psychologist to a dancer in a matter of minutes in the film.

Portraying abuse is not inherently problematic, nor is leaving some things up to the viewer, but it is doing a disservice to Harley to never acknowledge that this relationship is unhealthy. While I would normally argue that characters can be developed over time in franchises such as this, it doesn’t even seem like Harley realizes that anything is wrong. Instead she accepts it as normal that she is in this crazy relationship with the Joker and that she gets electrocuted by men on a semi-regular basis. Not even the other characters seem to take issue with this relationship. It’s almost as if they blame her for decisions she is not able to make either due to what is clearly meant to be diminished capacity to make rational decisions. 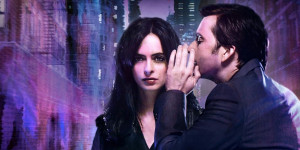 On the other side, we have Jessica Jones. Jessica and the other characters not only acknowledge the abuse, but they state it outright. The fact that Jessica tells Kilgrave “you raped me” is monumental in terms of dismantling the torture porn that comics and comic movies have in the past used in place of plot. What’s interesting as well is that, in the show, through the beautiful plotting and David Tennant’s spot-on, charismatic portrayal, Kilgrave wants you to feel sorry for him, and you can see it temporarily succeed with some of the characters, including Jessica. Kilgrave had a rough past, like many other abusers. But, in the end, the show still uses the tools it has to show the audience that it doesn’t make Kilgrave any less of an abuser or Jessica’s trauma less valid.

Moreover, we see in both stories typical abuser behavior. Kilgrave uses gaslighting throughout the show (“I didn’t exactly tell you to kill her. That’s just what you did.”), and The Joker makes Harley prove her love for him in various ways. However, one does something interesting with it and the other just lets it be. The only interesting thing done with this is in the fantasy part of the film. Harley clearly doesn’t want her relationship to be the way it is. Her greatest wish is not to settle down, but to have the Joker be different. Instead of having a Harleyfied house and kids fantasy, it’s actually very normal looking. And Leto, instead of having the iconic green hair and white skin instead just looks like an average person, nearly unrecognizable from The Joker. While Harley may associate The Joker with boyfriend, husband, or partner, that’s not really who she wants. There is still some part of Harleen Quinzel that hasn’t been electrocuted out yet.

I think that both Margot Robbie and Jared Leto have the acting chops to pull off a similarly complicated story without major problems. It’s disappointing though that nothing even remotely similar was attempted in the Suicide Squad film. Instead, the movie seemed content to romanticize Harley and Joker’s ever-problematic relationship. Hopefully, however, if a Harley Quinn spin-off happens (which is hopefully will, despite my issues with the premise of the character), this can be further explored.

At this point, Harley seems to the character in the DCU with the least amount of thought put into her. Robbie was excellent casting and she got a lot of the good jokes in the film, but they have yet to do anything interesting with the character despite how popular and well-known she is. While everyone insists that huge chunks of the Harley/Joker relationship were removed from the film before the final edit, I have to wonder if these would have helped with this particular issue. More than the movie being mediocre, I think that this was definitely the biggest problem with the film. As much as I love DC, they are definitely lagging behind Marvel in this regard. Jessica, who is largely unknown to most people, became one of the most compelling characters in an active television series in the first few episodes of Jessica Jones. However, with a similar amount of screentime and an equally talented actress, Harley just fell flat, and she has no clear direction except to follow the Joker in the final moments of the film.

While there is some small inkling of redemption for Harley Quinn in the film, the director’s cut would have to be crazy different to save this subplot. Hopefully, if the Harley Quinn spin-off film does happen, it’ll take plenty of cues from Jessica Jones.

Fiona L.F. Kelly is a writer, editor, and podcaster. She has published numerous articles about all things gaming and pop culture on websites all across the internet, was also a writer for Trinity Continuum: Aberrant 2e, and has been published in books and magazines. She is an editor for the pop culture and media website GeekGals.co. In addition to her writing and editing, she has also been a guest and host on several podcasts. She hosts the Project Derailed podcast Big Streaming Pile, produces and performs on Fables Around the Table, and plays the githyanki pirate Rav’nys on Tales of the Voidfarer. Buy her a coffee: ko-fi.com/fionalfkelly
Previous Post (p) Critical Role Recap: Episode 62 - "Uninviting Waters" (LIVE)
Share
Next Post (n) Critical Role Recap: Episode 63 - "The Echo Tree"