Earlier this week, I talked about the opening sequence of S1E1.

“How is Morty supposed to do well in his classes if you keep taking him away for high-concept sci-fi rigamarole?”

This moment nicely tells you what the show is about (high-concept sci-fi rigamarole), and introduces you to Jerry’s role on the show: the dumb skeptic.

“Math is very important. Without it, we wouldn’t even exist.”

This one-line gag satirizes the classic construction of “

[the sun, gravity, cells, photosynthesis, etc.] is very important. Without it, we wouldn’t even exist.”

Looking past that, however, it’s actually a kind of profound statement. It raises interesting questions about the nature of mathematics. Galileo famously said, “mathematics is the language in which God has written the universe.” In this sense, you can almost see mathematics as a guiding force of the universe, something without which we couldn’t exist.

“What about Frank? Shouldn’t we unfreeze him?”

Frank is the guy who is presented as a classic bully in typical high-school cartoon style. He’s basically this guy: 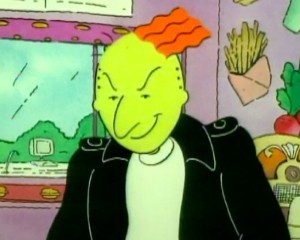 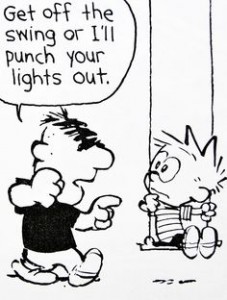 The cartoon schoolyard bully is a totally normal stock character, and he’s played pretty straight for a bit here. He gets out his knife and threatens Morty for no particular reason (“I don’t know if the knife is necessary,” Morty says. “You kind of have things handled without it.”).

But then out of nowhere, Rick comes along and freezes Frank. After he and Morty take off for their adventure, Frank topples over and shatters into dozens of pieces, forever traumatizing Summer, who of course had a crush on the poor bully.

This is a pretty direct statement about what the show isn’t about. It lets us know that, yes, Morty’s high-school life might come into play sometimes, but this story isn’t really about that. We’re not going to have a typical bully. This is a world where the problems are going to be a lot bigger and a lot weirder than that.

“Look at that thing right there. What the hell is that thing? It defies all logic, that thing.”

This scene introduces us to a lot of the Rick and Morty aesthetic. The world it depicts is filled with giant Cronenberg monsters covered in tentacles, too many eyes, weird mouths, etc.

Rick and Morty embraces the idea that alien life is truly alien. There are plenty of fairly humanoid creatures on the show, but it also goes on to portray and embrace lifeforms that take on a lot of very odd shapes and features. If we ever find multicellular life on another world, we should expect it to be very, very different from us. Rick and Morty doesn’t go anywhere near all the way with this, but it runs with the idea pretty hard for a sci-fi parody cartoon.

“Those Mega Seeds are super valuable to my work.”

We never really find out what Rick is doing with the Mega Seeds. One theory out there on the internet suggests that Rick uses the Mega Seeds to boost his intelligence, and that this may even be the origin of Rick’s genius. This might also explain why he burps and drools all the time.

Something truly bizarre and existentially horrifying happens within about a ten second period during the chase sequence.

Morty knocks over a weird bong sort of thing and inhales a green cloud that comes out of it. Moments later he coughs up a tiny alien who proceeds to grow to Morty’s height, become old, then fall over and die. The alien does all of this while running alongside Morty.

Rick’s only response to this profoundly horrifying situation: “Don’t think about it!”

Okay Rick and Morty. I’ll try not to think about it. But this kind of thing keeps me up at night.

Rick yells this at Morty, who is clearly apprehensive about taking the lives of living beings. Rick’s assurance that the things chasing them are robots convinces Morty to go ahead and shoot, and we’re immediately treated to the wounded alien talking about his friends, family, etc.

The immediate horror here is Rick’s cavalier disregard for sentient life. Of course, later on we’re introduced to robots that seem perfectly able to think and reason. Life is sort of just a fleshy robot is you look at it a certain way. So maybe Rick has a point: the metaphorical sense of robot as “thing that lacks autonomy” might be more important than the literal sense of robot as “mechanical thing controlled by computer AI.”

I still think it’s pretty clear that any way you slice it, regular Joe insect bureaucrat is a creature with his own wants and desires, and though he might just do as he’s told at work, he probably has a rich and rewarding life outside of work. Rick is wrong to count him as a robot, not because he is made of flesh, but because he has a life that matters.

“Did you just get into the cafeteria through a portal?”

Jessica asks Morty this after he appears in the cafeteria. Morty responds, “well, my Ferrari is in the shop.”

“You can get his number later. We gotta get those seeds out of your ass, Morty.”

About the Author: Tom Goldthwait (@Authw8)

Tom is a furry woodland creature. At times, he emerges from the enchanted forest to make a new blog post.