Netflix’s The Dragon Prince hit the streaming service last weekend and I may or may not devoured the entire first 9-episode season in a single sitting. In short, it is fantastic and should appeal to any fan of D&D-style high fantasy.  The show honestly feels like a low level D&D adventure with high stakes in a large fantasy world.

That being the case, it is no surprise that in the wake of my 3 hour and 54 minute binge of the show, I could not help but to start thinking of what the D&D Fifth Edition stats for the characters, items, and everything in the show would look like.

I figured would start with “the worst kind” of elves, the Moonshadow Elves.

Apart from minor cosmetic differences (horns and four fingers, mostly), the elves of The Dragon Prince do not deviate too much from the standard fantasy tropes and D&D elf features, so a subrace should be enough to bring the feel of them to the game table.

“Moonlight’s Power” is over-powered by design. Its basically the effects of a Cloak of Elvenkind AND Boots of Elvenkind together. I feel this is great flavor that fits the description of the power of Moonshadow Elves during a full moon that is given in the show. Its situational use (only during the full moon) should keep it from being too broken in the hands of a smart DM.

The weapons and items of the Moonshadow Elves are as unique as the magical land of Xadia they hail from. 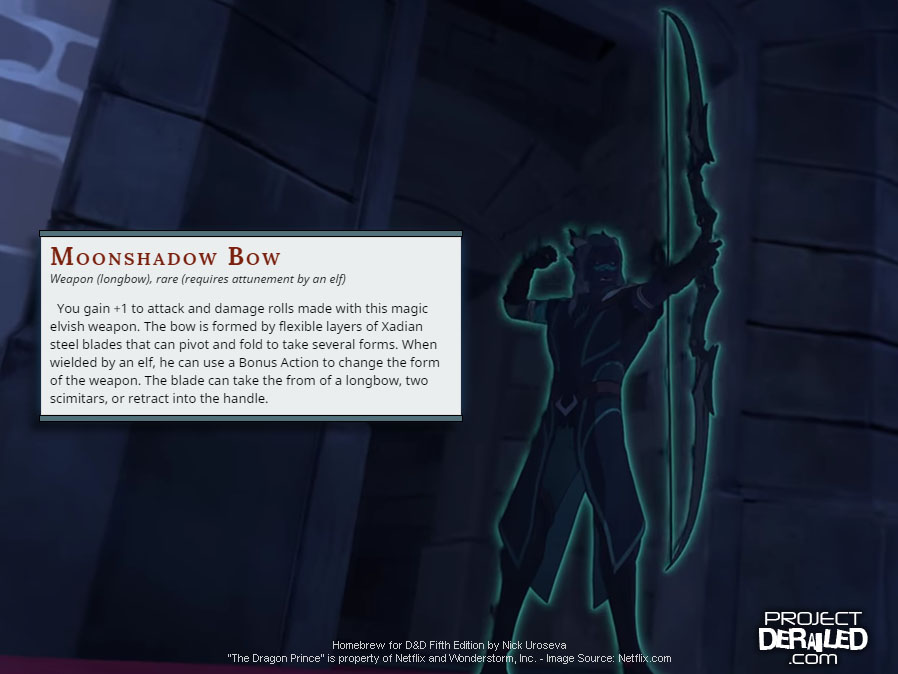 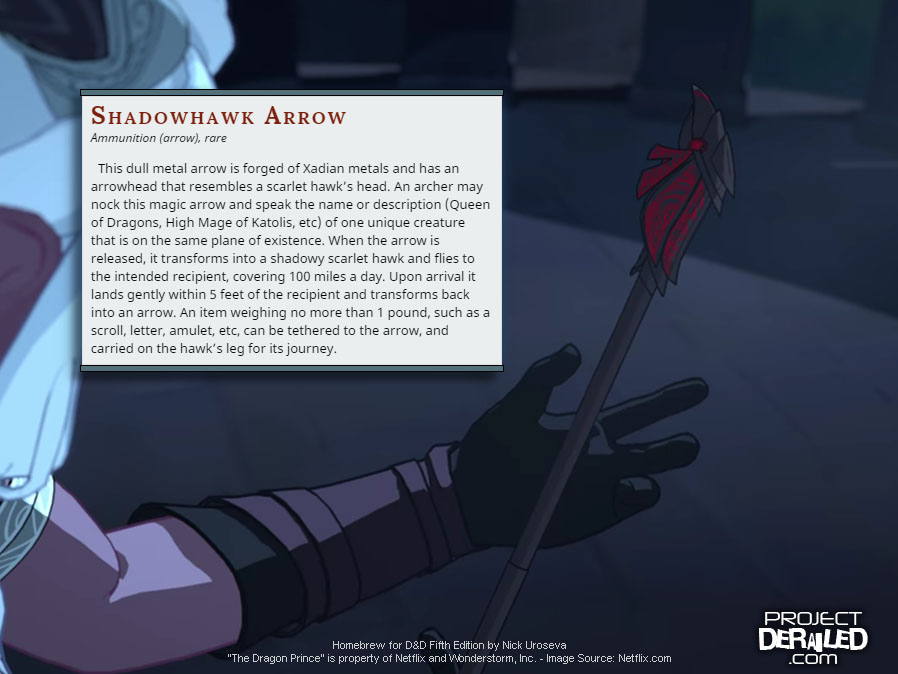 Rayla and Runaan as NPCs

The following is the characters of Rayla and Runaan as NPC statblocks using the above subrace rules and player character builds as bases, with a few tweaks here or there to make them function a little better as a statblock.

Rayla is built as a 4th level Rogue (Assassin) as a base. 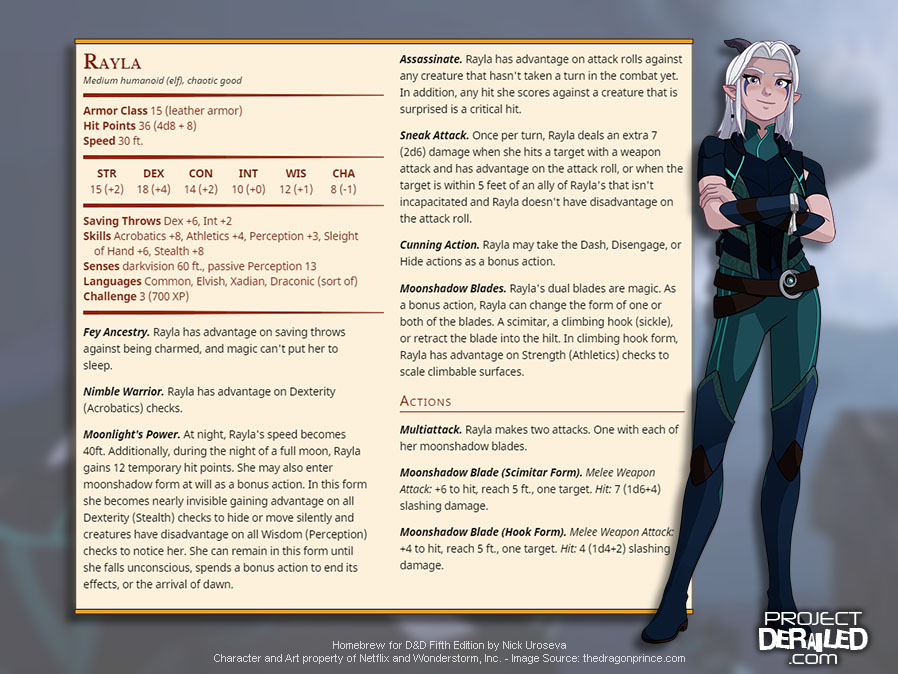 Runaan is built as a 16th level Rogue (Assassin) as a base. He does have about twenty years of training on Rayla, after all! 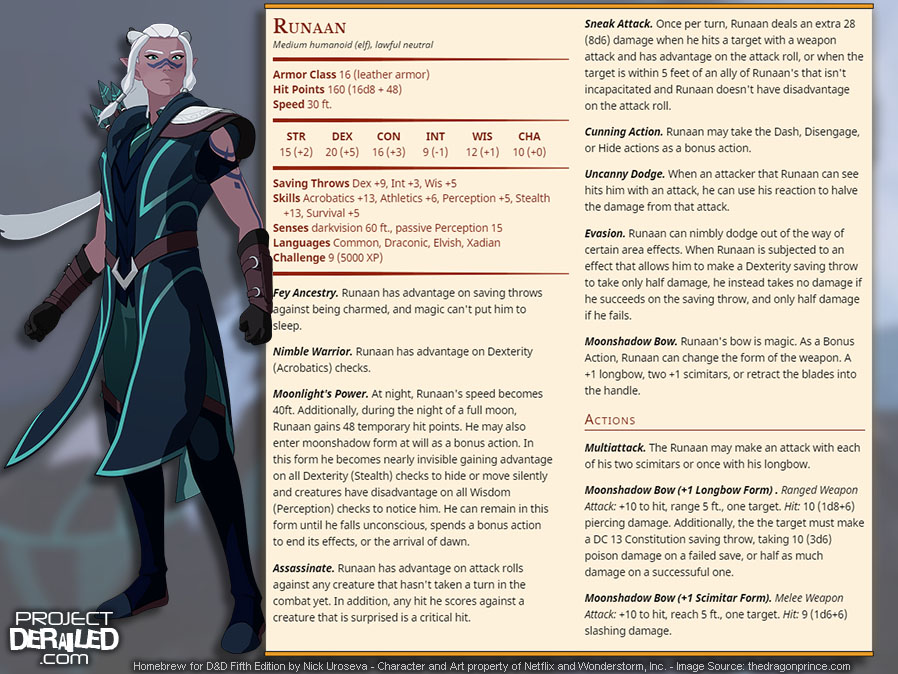 All these homebrews are untested. Any and all feedback is welcome, and if you use any of these in your games, let me know how it goes!

If you liked this post consider sharing it. I have lots more ideas for stats from characters, monsters, items, and magic seen on the show!

And watch The Dragon Prince on Netflix so they make more episodes!

The Dragon Prince is property of Netflix and Wonderstorm, Inc.
Dungeons & Dragons Fifth Edition is property of Wizards of the Coast.
Image Sources: Netflix.com, TheDragonPrince.com