This article was originally posted on Tanner Reviews.

I have been seeing an unreasonable amount of superhero movies this year. I should go watch something else, anything else just to break the pattern… But at either rate, I still saw it so now it is time to talk about it. This is going to be a rather long review after I went through the preliminaries of all the things that I wanted to discuss. But what all of this ultimately boils down to is the fact that this movie is probably one of the most painfully average movies that I have seen in a long time.

The movie starts off with the hope that Gods of Egypt was better than what it was and with our main villain Apocalypse (Oscar Isaac) trying to transfer his consciousness into another person. Humans rebelled and leave Apocalypse buried until present day. The story takes off in the 80’s and sees the formation of the X-Men that we all remember. Charles Xavier (James McAvoy) has the School for Gifted Youngsters up and running and a new student, a young Scott Summers (Tye Sheridan) has just enrolled.

Back in Egypt, a memory wiped Moira MacTaggert (Rose Byrne) has accidentally uncovered Apocalypse and has brought the blue sucker back to life. He sets off on his quest to take over the world in generic villain fashion… Oh and also the world continues to fuck Magneto (Michael Fassbender) over. 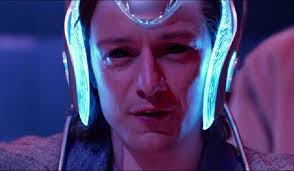 The Action & Effects are Good

I will give credit where credit is due, the movie does look good. The action and the effects have a flow to it that is natural and smooth. While I do have some problems with the fact that there was clearly some R rated action with some PG 13 rated editing, but beyond that I enjoyed the look of the film.

The Characters are Okay

For a character driven movie, it does do a good job of giving us a multitude of characters to root for. While I have problems with Mystique (Jennifer Lawrence) being a hero (I always saw her as one of the best damn villains ever), I can at least enjoy watching her. I am happy that Scott is a person and not a complete tool like the first set of movies and it was nice seeing Hugh Jackman show up as Wolverine… Though keeping him as Wolverine has some very creepy connotations that a man pushing 50 will be hooking up with Sophie Turner’s character who is just 20.

But the one that steals the show is Evan Peters as Quicksilver who was, in all honesty, the most 80’s thing about this movie that flucated from the 80’s to the 60’s. 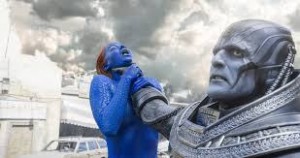 Let’s Talk About Some Bullshit

So let’s talk about how you save the day. You see, you save the day when you are able to prevent the villain from carrying out his plan. Okay… Fine, in this movie they are able to stop Apocalypse from carrying out the Apocalypse. Oh, spoilers? Come on we all knew that was going to happen, calm down. But when you have destroyed the infrastructure of the majority of the world, I would hardly called that a saved fucking day.

This is a problem with all 20th Century Fox Superhero movies. Justice League, Superman, Batman, X-Men, and so forth, they always want to raise the stakes by destroying shit but they don’t realize just how high they raise them or what it could mean for the aftermath.

Apocalypse wants to create the apocalypse by putting his mind in Xavier so he can control everyone while Magneto trashes the world. Magneto is able to destroy most of the planets buildings, resources, and so forth and the effects ARE GLOBAL! Of course, he eventually says “Maybe the apocalypse isn’t the best idea” and stops. But at the end of it all the presidents men are saying “WOO thank god we are all okay!” LIKE FUCKING HELL YOU ARE! Magneto has been able to destroy countless buildings, destroy sewage lines, water lines, electric lines, vehicles, boats, planes, infrastructure for every city on that planet. It isn’t fine nor something that can be handwaved away. It may not be the “Apocalypse” but it is a cataclysmic event that will take maybe a decade to completely repair. You are welcome to say thank god we are not all dead, but don’t call it day saved. It isn’t. You broke even at best.

Apocalypse is terrible. You know, I get it. Not all villains can be as iconic as The Joker or as intimidating as Ronan. But when you have a villain who has no motivation except humans are weak and mutants are strong and I am going to do the apocalypse because “Fuck you, I’m a God.”

He is terrible, he has generic goals, and honestly, he isn’t that intimidating. The guy is all powerful, but is constantly and quickly defeated by everyone who comes up against him. Even during the opening of the movie he is stopped by two dudes and a gigantic slab of rock.

He is just so generic. There is nothing special or interesting about him. He is, by every definition, a filler villain for more important villains to come up and give a real challenge.

The Script Isn’t Much Better 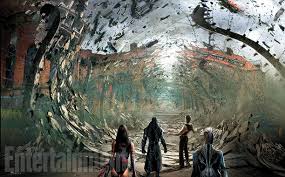 The script is terrible. Simple as that, it just isn’t that good. It is a movie that won’t let a moment happen, it just barrels through hoping that 80’s nostalgia and action to get past the fact that most of the shit they are doing is just plain stupid.

One of my favorite moments of the movie is when Havoc accidentally kills himself shooting his chest laser trying to kill our villains which destroys the entire school. It is soon followed by Quicksilver comically saving people with his super speed to “Sweet Dreams are Made of This” soon followed by Scott trying to have a moment to his brother dying. It all happens so quick that you cannot feel any emotions. You have too much emotional whiplash to care. That is soon followed by random ass people being kidnapped by the government. It is a script that just won’t let moments happen.

This movie is “okay” but there just isn’t anything worth remembering. It is carbon copy 20th Century Fox so who the hell cares? Fox sure as hell doesn’t as it leeches off Marvel’s success.

The action is good and the characters are enjoyable, but the script is bad and the villain is the most generic villain I have seen in these past two decades. Tragically this is one that just will not be remembered.