Tom: My last two days at Gencon were a blast. On Saturday morning, I played a system that’s currently on Kickstarter called Pythos. My experience with it was pretty limited, but it has a very cool combat system based on rounds where everything happens simultaneously. Each player chooses a token based on what sort of action they want to take, then flips it over to reveal it. After that, the GM sorts out what exactly goes down based on the declared actions.

Saturday afternoon, I played a game called Demon Hunters with Nick and some other friends of ours. It’s a hack of the FATE system and it was fun as hell. FATE is a system I’ve been interested in for a long time, but have always felt like I needed to see an experienced GM running it in order to really get it. Our GM was pretty good, and I definitely think I have a better grip on how to run FATE based games now.

Saturday evening, I played another game of 13th Age. My character was a shapeshifting druid who I decided to make spider-themed. I came up with the backstory that I was the High Druid’s spy. This game was a typical dungeon crawl, but still pretty fun.

On Sunday, we all played Cold Steel Wardens. The GM for this game, also its creator, is really excellent, and his scenarios are always a blast. He also has a new addition to the system coming out called Rogues Gallery, which is on Kickstarter right now.

Fiona: The last two days of Gencon were as fun and exciting as the first three. I somehow managed to get all really good games the whole convention, which has never happened before. All of the GMs were fantastic at explaining the games and creating an interesting story. They also let us run with doing crazy stuff (within the boundaries of the system), which is always great for one-shots. I played a demo of Blood in the Chocolate which was a fun Willy Wonka inspired game. I also played a Titansgrave one-shot. My obsession with Green Ronin games drives itself deeper. The GM for this game was also just a really good GM (the people I was paired with were all great as well). This was one of my favorite games of the weekend.

As usual, we ended Gencon by playing Cold Steel Wardens. We played this game the second year we ever went to Gencon and we loved it so much that we have managed to get into a game every year since. It’s a fantastic d10-based system that is flavored to be iron age all-original comic superheroes. The setting is gritty and the characters are all unique and interesting. Each year we have played with the same GM, A.P. Klosky, who also wrote the system.

And, of course, Gencon would not be complete without substantial shopping trips. I purchased a fair amount of dice from Chessex, of course, all of which are beautiful and will hopefully help all of my characters be awesome. However, now I have to buy a new box for my dice because I no longer have room in either of my boxes. 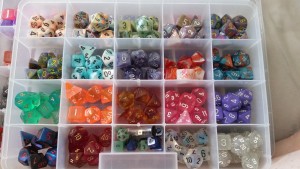 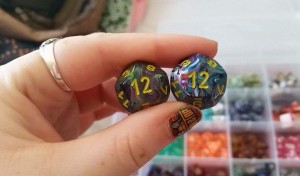 The highlight of the trip was however, seeing Critical Role Live at the Hilbert theater. It was a blast and I loved seeing all of the Critters. I loved seeing Marisha dominate during the episode. Also, there were multiple Hamilton references throughout the show and in the Q&A. Someone even sang a modified Critical-Role-themed “You’ll Be Back” to the cast, and it was amazing.

We ended the weekend with St. Joseph’s Brewery and Hamilton on the trip back to Youngstown. Both were excellent.

Nick: I could probably fill several blog posts about just my Saturday alone at Gen Con this year, but who has time for that!

We started the day with a  Titansgrave game, the sci-fantasy setting for Green Ronin’s Fantasy Age rpg system. I have been a long time fan of the Geek & Sundry Tabletop show  Titansgrave show, and I bought the Titansgrave adventure/setting book and the Fantasy Age rulebook at Gen Con last year but I never did get a chance to actually try out the system. The stunt system is a lot of fun and allows lots of interesting cinematic flourishes to combat that can really make your character feel like a badass. The game itself was a little overstuffed for my taste, nearly 10 players, but the GM was top notch and made it work despite the small and loud convention center room. The game was a lot of fun.

Next I played in a game using a non-fudge-dice version of Fate called Demon Hunters. Turns out this is an RPG inspired by the Demon Hunters student films by the same guys that did the Gamers movies and the JourneyQuest websites. I was not aware of this until I sat down. The game was goofy and a lot of fun. The system worked exceptionally well and I may even prefer it to traditional Fate.

After this event I booked it across the convention center to Lucas Oil Stadium for the Matt Mercer signing. After just missing out at the signing at the Green Ronin booth the day prior I was glad I had the foresight to grab a ticket so I could have him christen my DMG. 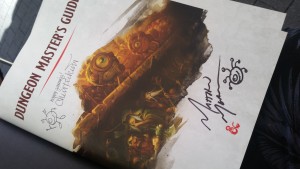 NOW THE RITUAL IS COMPLETE.

After the signing I grabbed some beer, met up with Fiona and our friend Annie and we grabbed a quick bite and then walked over to the Hilbert Circle theater to get in line for Critical Role Live. And what a line it was. It not only wrapped clear around the city block, but also snaked into a back ally for about 80 yards and back out to continue around the block. 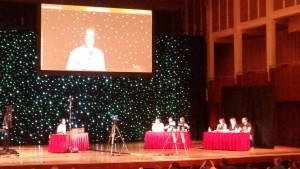 The event was a blast. There is something very surreal about being in the same room as 1500 other nerds who are just as obsessed with the thing you usually enjoy at home in solitude. Meeting all the critters was absolutely wonderful and just seeing a huge chunk of the community that has developed around this show is staggering. The episode itself was also fantastic. Marisha’s “How do you want to do this” rocked the theater in a way I thought nothing short of a pro sporting event could. Even sticking around for the Q&A was very interesting. It felt very intimate despite being seated many rows back. I will definitely be doing this again or whenever they do a live show next.

Sunday was quite leisurely by comparison. We made our last rounds in the vendor hall and I succumbed to a few dice and miniature impulse buys. This is usually tradition at this point. We closed out the con with a Cold Steel Wardens game with its creator, as we have done the last four years now. Lastly, we hit up St. Joseph’s Brewery before hitting the road back to Ohio.

Another Gen Con down and I already can’t wait for the next one! 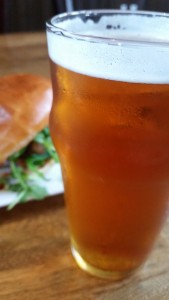