Since there was no Critical Role last week due to Thanksgiving, we had no new Critical Role Recap this week. But we just had to scratch that CR itch so here is a post about other cool things in the Critical Role fan community!

Critical Role, for being a show about “nerdy-ass voice actors” playing Dungeons & Dragons, has created a massive passionate community of fans, many of which have been inspired to create. In addition to the thousands of pieces of fan art, many have started websites and other projects to add to and enrich the community.

Here are five of my favorite things in the Critterverse you should definitely check out! 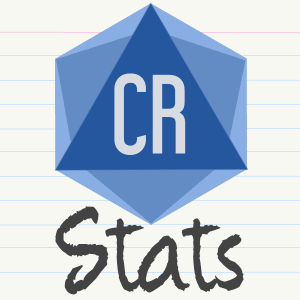 Ever wonder exactly how fucked Vox Machina is at the end of any given monster reveal, if Talisen really rolls the most Nat20s (Spolier Alert: he does), or exactly how many times Matt has Facepalmed at the antics of the party? If so, that Crit Role Stats has you covered.

The awesome people at Crit Role Stats keep track of what seems like everything that can be reasonable quantified on the show. The have recorded everything from each PCs personal character sheet stats at any given moment to running totals on a variety of in-game activities, and even silly things like chronicling every single shirt Sam Reigel has worn on the show.

So whether you want to try to get a leg up on what the party can expect when the finally face Thordak or if you just want know how many times a character has kissed someone, be sure to check out Crit Role Stats.

One of the biggest draws to Critical Role, in my opinion, is not just the D&D, but the people playing it. The live, unedited format of Critical Role really emphasizes the sincerity of its cast, and we get to see everyone be themselves in all of their nerdy glory. This is further emphasized when we have an opportunity to see the cast interacting and talking with each other and the community outside of the context of the game as is the case with their appearances on con panels and semi-frequent Periscope Q&As and Critmas gift openings.

Critical Scope is a YouTube channel dedicated with curating these periscope videos and recordings of convention panels and posting them (with the cast’s permission) in one easy place for the Critter Community to find. Thanks to Critical Scope we now have an easy way to find videos like that moment Marisha accidentally started speaking into her glass of wine instead of the mic at a panel or when Liam and Travis got Wil Wheaton to “curse” Matt’s DM table before a boss fight and more.

And recently Critical Scope has been producing awesome fan films. There are two out currently, they are titled The City and Ravens Slumber. Go check them out! 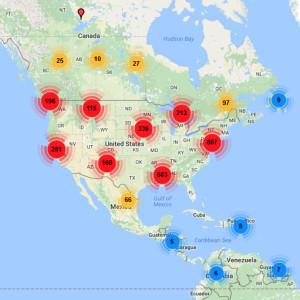 World of Critters is a custom ZeeMaps.com map that includes the locations of Critical Role fans all around the world. Just go to the map, click your city, add a point with you name and/or social media handle if you want to add yourself to the map.

I personally found this fascinating to see exactly how widespread the love of this show really is, and its also really cool to see what Critters are around you to perhaps follow on Twitter for future critter meetups! 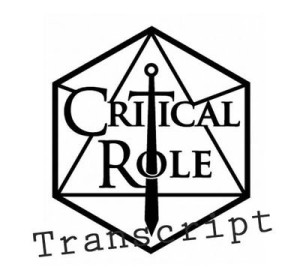 Critical Role Transcript is an initiative to provide closed captioning to every episode of Critical Role in a hope to make this show we all love more accessible to  deaf and hard-at-hearing individuals in addition to fans of the show that speak English as a second, third, or forth language so that they might follow the show more easily.

And lets face it, the audio of the show can get chaotic at times and I know Fiona and I would appreciate some captions sometimes when we are rewatching while working on our Recaps.

Critical Role Transcipt currently has a GoFundMe up in a hopes to raise funds to hire captioning services to transcribe the remaining hours and hours of video still left to be captioned. Go support them!

The Crittery is a website in the works by Amanda McClain (@amandammclain) intended to be one place to find all of the awesome artists and creatives of the critter community. The site will be launching soon but artists can register now to have their services featured on the site!

Also they have an awesome logo designed by a really cool guy….okay, it was me.

There are many more awesome critter projects and works out there, we are only scratching the surface here. I am sure this is only the first of many posts highlighting the cool things the community as created!

Be sure to check out our Critical Role Recaps here on ProjectDerailed.com every week!