Overwatch has been consuming my life lately. It’s one of my favorite games that’s come out in the last few years. So, when Mani Mondays was conceived as a weekly feature on Derailed, I knew I had to do some Overwatch nails. I knew I had to honor my two favorite heroes: Pharah and D.Va.

Since this is the first post, I’ll explain the intent behind Mani Mondays: I wanted to do cool nails and make a tutorial so other people can also do cool nails. However, I am no professional manicurist. I’m going to do to make something cool, but it will be within my fairly limited skills. Hopefully, this will be helpful to people in the same boat as me. 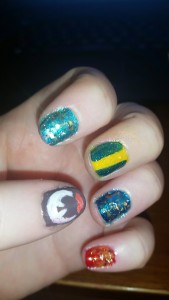 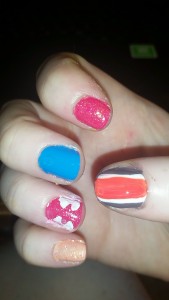 The top picture is inspired by Pharah, and the second picture is based on D.Va. I went through many design changes throughout the entire process, but I’m pleased with the final result. 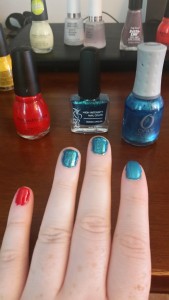 This side was relatively simple to do for the most part. For the base, I put (from left) Sinful Colors “Gogo Girl,” Jesse’s Girl (I couldn’t find a color for this one) on the middle two fingers, and Orly “It’s Up to Blue.”

From there, I tried to put on a relatively simple design. For the pinky finger, I wanted to highlight the explosions from Pharah’s rockets. Using a dotting tool, I dragged Sinful Colors “Let’s Meet” over the nail to look like flames. This didn’t show up as well as I hoped, so I added Sinful Colors “Twilight Twinkle.” I ended up liking this effect so much that I added it to most of the remaining nails. For the middle nail, I just added a stripe of “Let’s Meet” after making a white strip through the center of the nail. 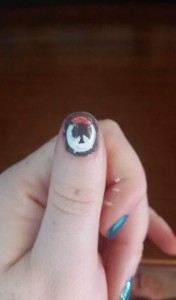 My thumb far and away took the most time. It’s a relatively simple design, however. I drew the best circle I could with a nail art brush using Sinful Colors “Snow Me White” (this is my favorite white. It has the least amount of streak of any other white I’ve used). Then, I added the lines coming out of the bottom of the circle and colored the top bit of the circle using “Boogie Nights.” “Boogie Nights” is actually a bit too coral of a color for my taste (I wanted a bright orange), but it’s what I had on hand, and it ended up working better than I thought.

After I did this, I used the nail brush with the “Slick Slate” base color to clean up the circle and create the separation between the white and orange. 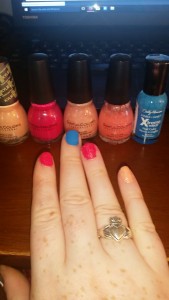 Though it may seem like I missed a color in the list above, I did not. For some reason, I have two different versions of “Pinky Glitter.” One is closer to a ballet pink and the other is a darker fushia color. Both are glitter, however, so the actual polish is more or less transparent with a slight tint once applied. Even so, I like to pair the darker version with “Feeling Great” and the lighter one with the Kylie Jenner Collection’s “V.I.Peach.”

From here, I didn’t add anything to the middle finger. I wanted to include some sort of design with white and pink, but I’m not very good at doing designs using my left hand and I didn’t have any stamping tools. Most of the nails ended up with just glitter as a result. However, I wanted to add in D.Va’s whiskers somehow, so they ended up on my ring finger. They’re a bit messier than I would have liked, but I’m overall happy with how it turned out. It’s pink and cutesy, which I tend to associate with D.Va. 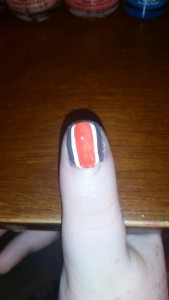 I tried several times to replicate a half-decent Overwatch logo on my right hand, but it just wasn’t working. As a result, I made this, which requires little to no skill or steadiness. It’s just a grey base with smaller and smaller stripes going through it. I used the brush that comes in the bottle to do all of the stripes. It came out looking more like Mass Effect than Overwatch, but it was the best I could do with the talent I have.

I haven’t been able to do my nails in quite some time due to performing in a medieval faire and just having a lack of time, so I’m pretty pleased to get back into it. Check back next Monday for a new design and theme!