The Mighty Nein agree to help the father of their new ally Risa. He created a gear warden which went rogue and had to be sectioned off, destroying the family’s reputation. Leaving Kiri with a group of children with parents trapped in the prison, they head to the prison.

They discuss the best way to find their way into the prison. Risa agrees to lead them to the building.

Risa leads them down to the Iron Lot. They see the large platform elevator locked in place and smoke rising from chimneys. Risa points them over to the omni-smelter: a series of buildings where ore gets melted down. She points to the armor vault. Then to the underbellows. Finally, she points out the Gearhold Prison.

They scout out the area before heading back to Risa’s father’s house. They pick up a meatpie on their way, hoping it will be an acceptable present. As they travel, the steamwhistles go off, signaling the end of the workday.

As they walk, they see tide collectors knocking on doors. Eventually, they arrive at Tinkertop Inventions. They give him the meatpie, saying it was Risa’s idea.

Tinkertop handed over the blueprints for the guard, but, as none of them read gnomish, they are mostly unable to make out the finer details. However, they use the pictures and limited linguistic knowledge to make out what’s on the blueprints and formulate a plan.

They decide to bring Tinkertop to the prison with them to persuade the warden to let them inside. As soon as they get outside, Tinkertop starts to get nervous. Risa reveals that he is a bit agoraphobic.

First, they stop for tar to clog up the inner mechanical workings of the machine. They make their way down to the Iron Lots. Nott goes to case the vicinity. Trying to buy the tar, however, proved unsuccessful.

As Molly and Yasha perform, the unseen servant drags the bucket. Another worker starts to yell Molly to get down from the fence. Molly flips off the fence, landing on Yasha’s shoulders. Tinkertop starts to distract the workers as well.

Nott  mage hands the bucket of tar over the fence. They try to put it in the haversack, but Jester refuses, saying she paid a lot of money for it and it will spill.

When they arrive at the prison, they are led in to meet the warden. The warden wears a cloak with gold tassels as he files the paperwork of the prison. He asks the group why they have bothered him from his work.

They tell the warden that they wish only to defeat the clockwork warden. After that task is completed, they will leave. The warden asks what they would like in return. They agree to discuss a contract after the automaton is taken out.

As they travel down into the prison, they are yelled at by prisoners.

Molly looks around to see if anyone reacts to the name. A few prisoners chuckle.

They are led to the sealed chamber. The doors are opened for them while they quickly prepare for whatever is inside.

They step inside the chamber. The walls are scraped and gashed from hundreds of blade marks. Whatever is in here has been trying to escape.

Caleb sends Frumpkin forward. As the cat goes up to investigate, he sees a spherical metal object. Suddenly, it bursts into life, and Caleb pulls Frumpkin away just in time for its blades to pop from the machine.

The Mighty Nein immediately begin to attack the automaton. They swing their weapons at it, but it is strong. As they fight, more and more contraptions come forth from the metalic body, and it knocks Beau out in the process. Their plan to cover the machine in tar does little to help, but Molly manages to break the machine.

The guards come back to retrieve them, surprised that the party is still alive. Beau falls into Yasha’s arms, insisting that the aasimar barbarian carry her. She casts healing hands on Beau.

They enter into the warden’s chamber. Tinkertop and the warden are waiting for them. They hand Tinkertop over the heart of the machine. The warden asks their names and thanks them for their service.

While offering the reward, they negotiate the release of the Shuesters. While their crime of false idol worship is severe, they use the reward money plus 150 gold pieces to get them out.

The shocked parents of the Shuester children are led out from the prison by The Mighty Nein.

Immediately, they begin to ask about their children.

Nott: “Don’t worry. They’re being kept safe by a tiny bird with a dagger.”

They arrive back at the butchery and there is an immediate family reunion. The parents tightly hug their children. Kiri shuffles out and hugs the Shuesters as well.

Kiri takes out her dagger and says “The Mighty Nein!” while going over to the rest of the group. They woefully tell her that she should be playing with the other children, not risking her young life with them.

They ask the parents to take Kiri with them, explaining that their lifestyle was not suitable for a young girl. Kiri looks between the two groups, but she eventually seems to understand that she must go with the Shuesters.

She grabs her dagger and gives it back to Beau, handle first.

Kiri begins to play the music box. She hugs each member of The Mighty Nein individually. 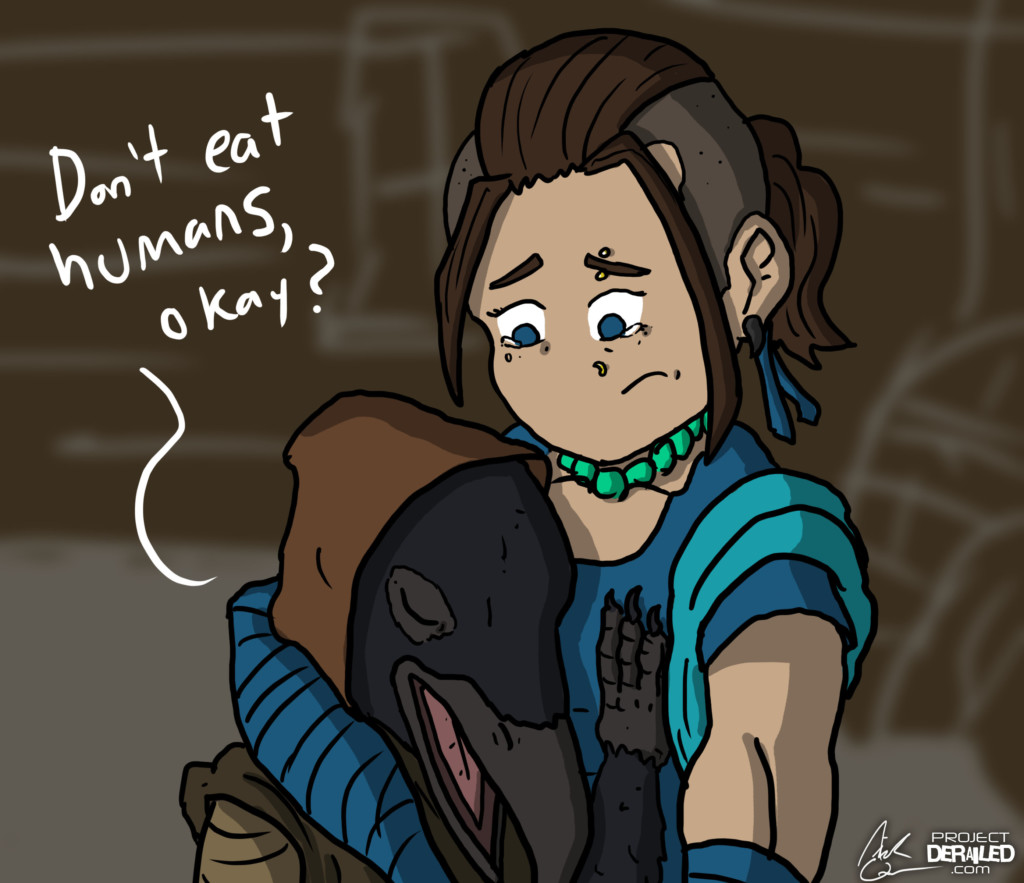 Jester makes them all promise that they can come back to check on Kiri.

Kiri goes back into the building with the Shuesters. She looks back at them before exiting.

The next morning, Beau pulls Caleb aside. She makes him promise her that they’ll both try to do good from here on out.

They left to say goodbye to Tinkertop before exiting the city. They thanked him for his help, and they asked him to keep an eye on the Shuesters. They say goodbye to Risa as well.

Yasha sadly tells the others that her work outside of the group will continue to call her away. The others, especially Caleb, accept this, but express their regret that she must leave.

They leave on the road to Shady Creek Run. After traveling for the day, Yasha and Fjord take the first watch. Jester wakes up during their watch as well, and the three go for a walk. Fjord offers to show Yasha some of his hometown on the shore. Jester and Yasha describe their homes as well.

As Jester talks, sound stops coming out of her mouth. All three pause in confusion. In total silence, a group swarms upon them, shoving gags into their mouths and shackling them.

Their captors call back to a tall human man with a tattooed scalp.

“Lorenzo, your instincts are sharp. Looks like we’ve found ourselves a sudden bounty.”

Lorenzo tells the thugs to put them into the carts. They are dragged over rocks and dirt and lifted into cages.