Hey everyone! Welcome to my new blog series, Roll For Initiative! Here I plan on grabbing all sorts of characters, creatures, items, or whatever from various pop culture source and, for shits and giggles, generating stats for them for the Fifth Edition of Dungeons & Dragons!

Its no secret that us here at Derailed are a little (read: “really fucking”) obsessed with Overwatch at the moment. If you don’t believe me you can check out Tom’s thoughts on Bastion, Fiona’s thoughts on female diversity in Overwatch, our first Overwatch GIF Round-up, or even Fiona’s Overwatch inspired Nail Art! You get it.

So I thought it only fitting that I would kick off this new blog series by creating D&D stats for ALL the Overwatch heroes! Here is the first three!

All heroes will be created at approximately Challenge 10.

As Windowmaker says, Tracer is “a nuisance.” She is quick and incredibly hard to hit, running circles around opponents and slowly whittling away at them from their flanks. 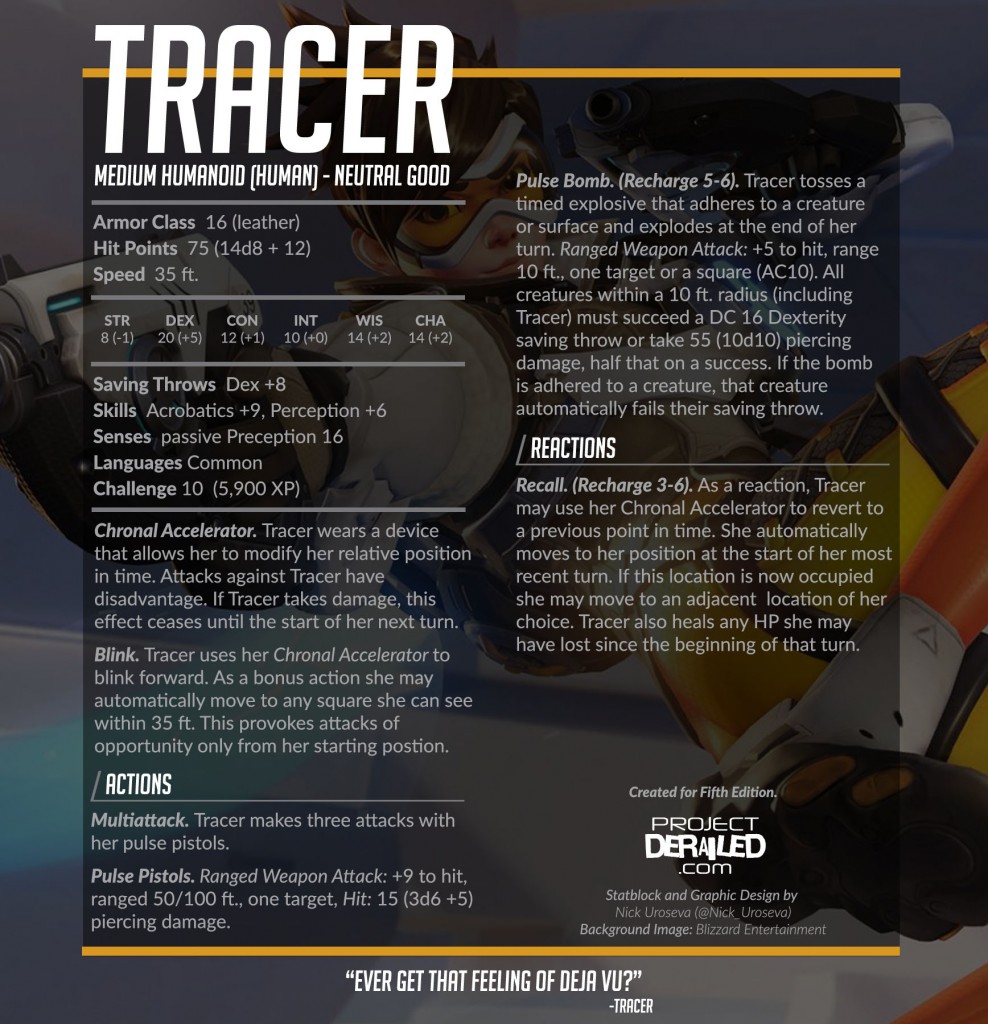 Winston is a disrupter, leaping into the middle of any situation and turning it on its head. He doesn’t deal too much damage in one go but can still dish out some punishment if you give him the opportunity to use his Jump Pack. Not to mention his Primal Rage is a game changer just when you think he is down for the count. 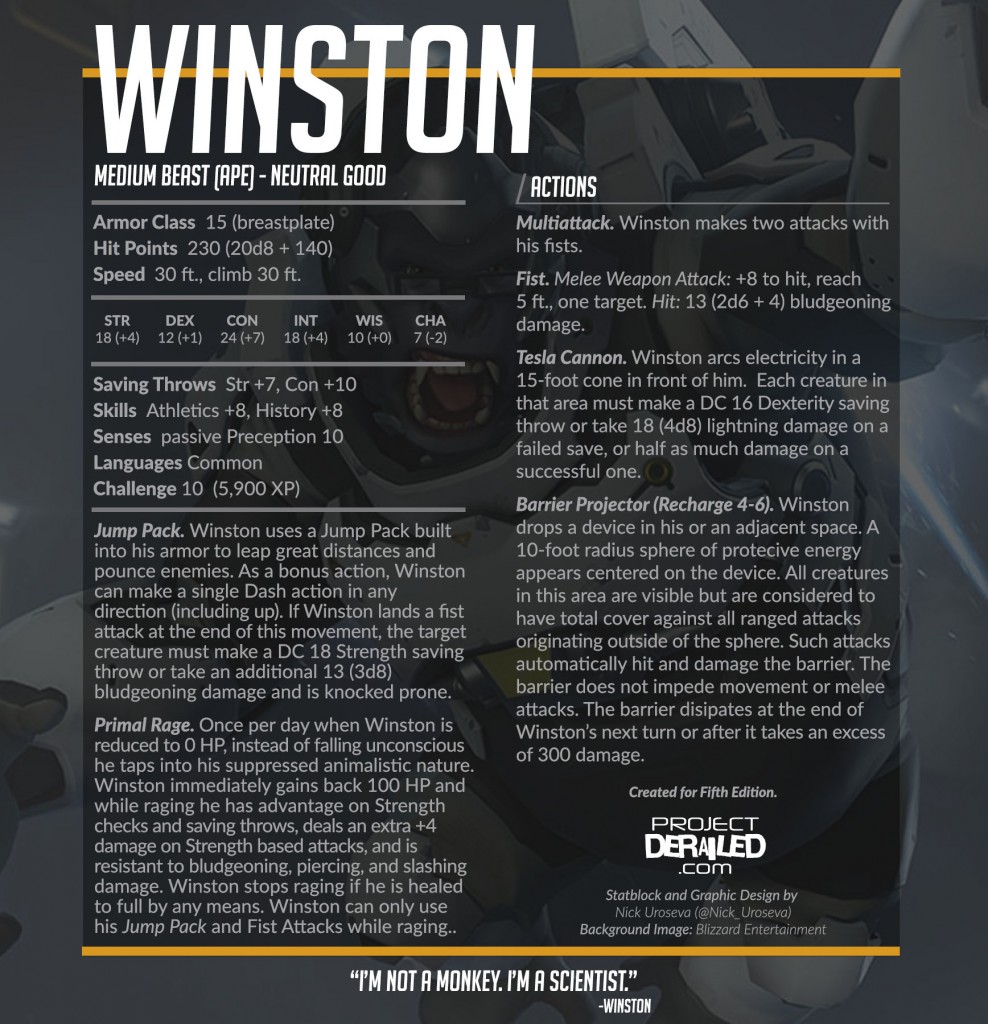 Pharah is all about getting above the battle field. Her boost and flying abilities allow her to consistently hover over the battle field, uh, “raining justice from above”…. Well placed concussive blasts could feasibly line up less mobile foes for a well timed Rocket Barrage. 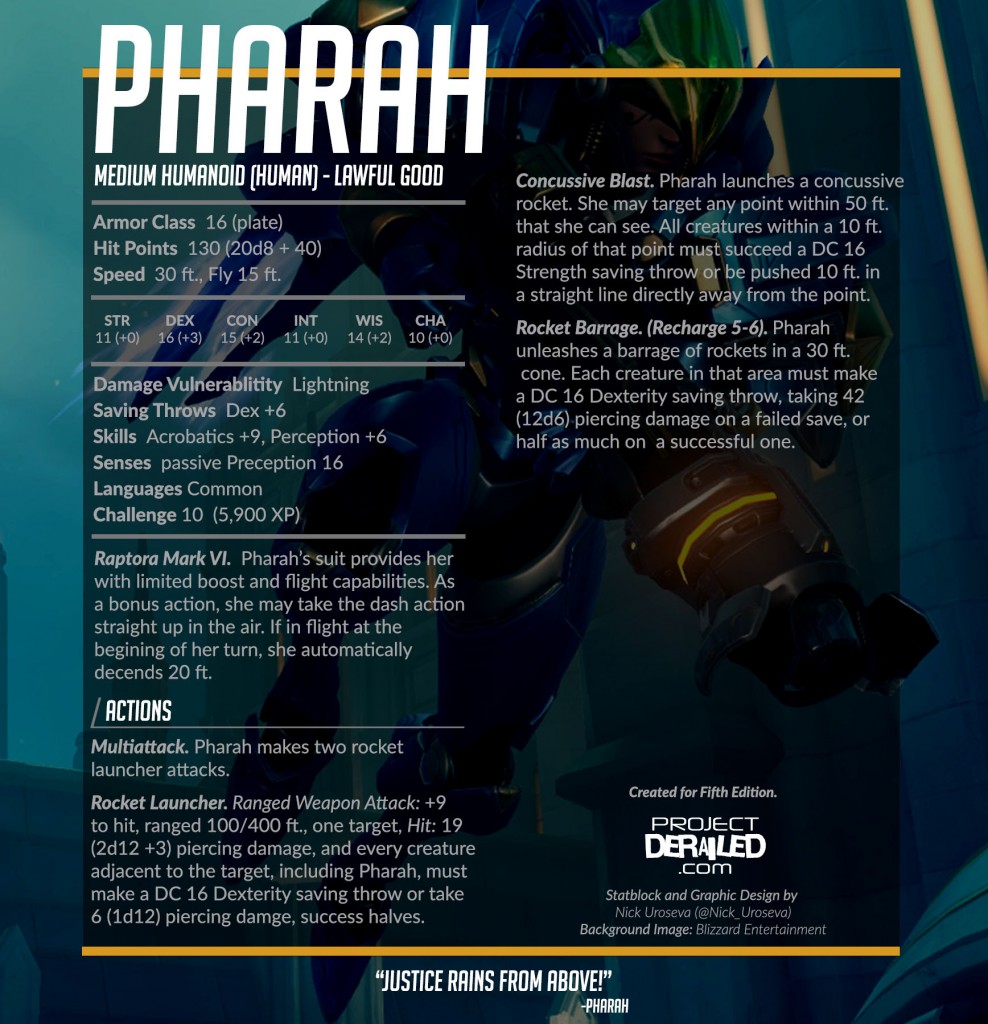 Feel free to re-use, re-skin, or re-flavor these stats however you like at your table! Be sure to tell us how it went!

Keep it here every Friday for a new batch of heroes!

All characters are property of Blizzard Entertainment. All rights reserved.

Nick is a social media marketing professional and content creator by trade but also dabbles in everything from graphic design, photography, illustration, videography & video editing, animation, and podcasting. He is the Co-Creative Head at Derailed Medial LLC, the creator and Dungeon Master of the ENNIE-nominated podcast Tales of the Voidfarer and cast member on Cape Chronicles and Fables Around the Table.
Previous Post (p) Nerdiest Talk Show on Earth: Episode 21: Con Culture
Share
Next Post (n) Project: Derailed Gets Sorted Into Ilvermorny Houses