Ultimately, where the shows differ the most is in feeling. Alton Brown and the Cutthroat crew are the bad boys of culinary television. The contestants are ruthless and unabashedly fight for the cash prize. Chopped, despite its harsh name, is much softer and the contestants are friendly to each other and the judges. The differences in the reality shows demonstrate their strengths and weaknesses, particularly when compared to its sibling show.

I just want to hug the Chopped contestants. At least one contestant per episode has a very dramatic backstory, and the others really play up the romantic parts of their lives. This is part of what makes each episode very stressful. These contestants seem to be really counting on the prize money to prove something to themselves or others. Even the contestants who seem to be planning on keeping the money for themselves imply that some of it will go back to family and friends who have helped them along the way. It’s rare that someone doesn’t seem like they deserve to win. That’s not what Chopped is about. There’s no villain, so when someone gets Chopped, it hurts.

However, this can quickly become over-dramatic.

More than one contestant’s life has somehow been completely ruined by cooking. While the starving (well, perhaps not with chefs) artist trope can be used well, the producers of Chopped don’t know when to pull back when leading the contestants to create a narrative about themselves. This kind of thing can work for a season-long reality show where we’re getting to know the contestants, but “cooking made me lose everything I know and love so I went on a competition show about cooking” makes the viewer feel like there’s something that’s not being disclosed. However, at this point, it is so central to what Chopped is that it would be impossible to separate Chopped from these backstories.

Conversely, the contestants on Cutthroat Kitchen are there to win money and dick people over. They’re willing to pretty significantly reduce the amount of prize money they will get in order to make sure their opponents leave with nothing. You wouldn’t see that on Chopped. It’s refreshing to see people’s motivations to win money be reduced to the fact that they want money. The producers here do this in a rather sophisticated way: they get each contestant’s personalities across while ignoring backstory entirely. It doesn’t matter where the money will go after the episode wraps; the money is available to them, and, therefore, they want it.

Surprisingly, the worst part about this is often the contestants are just bad at being assholes. The trash talk is often laughable and the sabotage is wildly ineffective at least once per episode. When you’re spending $5,000 to essentially eliminate someone from a competition, you’d think that you’d pretty carefully consider how you’re going to use this sabotage. However, more often than not, it seems like they just want to sabotage for the sake of sabotaging, and the exciting parts are manufactured rather than being the result of genuine drama. 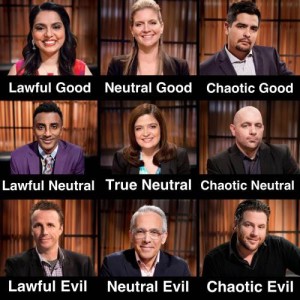 The judges on Chopped are nearly as crazy as the contestants. However, since they are present for the whole process (from reveal to prep to judgement), they often take on the role of the viewer, particularly during the preparation aspects. I think that they are trying to act as commentators, like you would see in a sports game. However, they become more similar to a sports fan watching the game. They panic when there’s a minute left and no one’s plating and manage to come up with interesting dialogue after the fact.

Watching the judges on Chopped during the preparation period really stresses me out. They’re always grabbing on to each other and wincing. When they start yelling at people to plate it, it’s game over. In other shows, the camera cuts around to make it seem like the contestants are getting it down to the wire when really they finish in plenty of time, but not Chopped. The judges make it abundantly clear that the contestants are way behind in a very tight schedule. They’ll yell out the time and give basic help like “your stove is on fire!” but this detracts somewhat from the Chopped experience. It’s already a show that stresses viewers out, so the judges adding to that isn’t always helpful. However, they give excellent descriptive commentary on the dishes.

There’s not much to say about the judges on Cutthroat Kitchen. They’re constructive, but not nearly as nice as the Chopped judges. They aren’t there for the fun stuff and have no idea what was missing from the process so they can give an unbiased review about the final product rather than the prep.  They’re neither good nor bad. They just are.

Ted Allen and Alton Brown are like the good twin and the bad twin respectively. Ted Allen is everything you want in a competition host. He’s charismatic and easy-to-understand and lets the contestants down with a genuine gentleness. He’s never angry or cruel, and he’s even much softer around the edges than most hosts. He separates himself entirely from the judging process: he never tastes the food, and therefore he is the ultimate impartial host. No one else would be half as good as him to deliver bad news to talented people.

Alton Brown, however, is everything you didn’t know you wanted in a competition host. He makes sure that the only thing that’s fair is unfairness. He is also very charismatic, but it’s more devious and evil. Simultaneously, he becomes someone you want to hang out with and someone you who you should be a little afraid of. He’s neither heavy handed nor too light with the punishments either.

Really, both of them are excellent at providing the atmosphere for their respective shows and keep consistency through the series where it could easily lack it.

I like Cutthroat Kitchen, but Chopped will always be bae. Ted Allen’s gentle reminders that major mistakes don’t always mean elimination sometimes get me through the day. Even though it is a much more high-stress show, ultimately, Chopped is a more interesting show. It does naturally what Cutthroat Kitchen tries to manufacture. The excitement of trying to make a good dish featuring weird ingredients is inherently more interesting to me than trying to make something simply in a fucky way. Also, the fast pace of the show and obscure ingredients make is less likely that you will spend the whole episode with a growling stomach.

Fiona L.F. Kelly is a writer, editor, and podcaster. She has published numerous articles about all things gaming and pop culture on websites all across the internet, was also a writer for Trinity Continuum: Aberrant 2e, and has been published in books and magazines. She is an editor for the pop culture and media website GeekGals.co. In addition to her writing and editing, she has also been a guest and host on several podcasts. She hosts the Project Derailed podcast Big Streaming Pile, produces and performs on Fables Around the Table, and plays the githyanki pirate Rav’nys on Tales of the Voidfarer. Buy her a coffee: ko-fi.com/fionalfkelly
Previous Post (p) Critical Role Recap - Episode 66 - "A Traveler's Gamble"
Share
Next Post (n) Classic Movie Review: To Kill a Mockingbird