For Gencon, I knew I had to have awesome gamer nails. In years past, I’ve painted my nails to match my dice or did simple nail art. However, I really wanted to try something I’ve never used before: nail wraps. I knew from Instagram and other social media that the place to go for nerdy awesome nail wraps is Espionage Cosmetics. As fate would have it, I picked up a pack of Tabletop nail wraps from Geek & Sundry during last year’s Gencon.

Originally, I didn’t want to do this review because I didn’t know the shelf life of these nail wraps, I was worried that they would under-preform due to age, but I am so impressed with them that I decided to do it anyway. 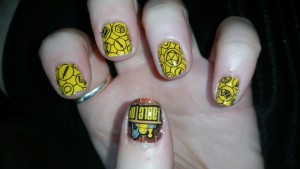 I have never tried nail wraps before, so I was worried that I would mess them up. The packaging has instructions on it (as well as a link to an instructional video), but they ended up being fairly self-explanatory.

There are extra wraps in the packaging so you can size it as close as you can to your nail, but I was basically just hoping that there would be enough in case I messed up. The first nail was a bit of a trial and error, and I discovered that it would be easiest with a base coat, which is not recommended by Espionage.

Once I had applied my first nail correctly, the rest went on easily. The whole process (which I did by myself) took approximately 20 minutes, which is much shorter than I would have spent if I had tried to replicate the design without a wrap or if I was painting a solid color and waiting for them to completely dry. This time includes adding a clear topcoat (I used a Revlon quick-dry topcoat), which, despite what Espionage says, really should not be considered optional. 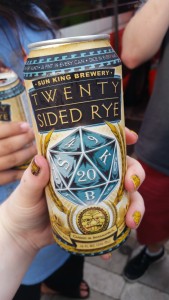 Look at my pretty nails and beer!

I had worried that the wraps would feel different from polish on my nails, but they really didn’t. It felt very natural and I spent plenty of time staring at them because the design was so good. I got a ton of compliments on them as well.

Also, they glow in the dark!

The wraps however, didn’t end up lasting as long as advertised. The packaging states they can last for weeks with a top coat, but I applied them on late on Tuesday (8/2) and removed them after lunch today (8/8). This is comparable to how long my polish would normally last. However, I will add the caveat that, again, these are an older set and I did not reapply the top coat. I think doing the latter would have extended the life of the nails quite a bit. 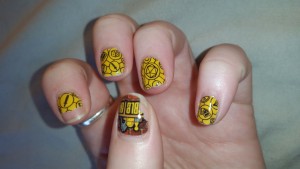 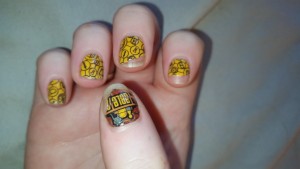 As you can see, after almost a week at Gencon, the wraps chipped pretty significantly on the thumb and pointer finger, which led to my decision to remove them. This is usually were my nails chip the most from prying various things with my nails (which I did in attempt to fix my phone at the convention), and using those two fingers quite a bit.

If you’re considering buying wraps from Espionage Cosmetics, definitely purchase them. Despite the very few (and very minor) issues I had, I would absolutely purchase from them again. The wraps all have awesome designs from a wide variety of fandoms, and they are excellent quality.

I just received a set of Moxxi from Borderlands wraps from the Loot4Fangirls Lootcrate, and I am so excited to try them. Hopefully, this doesn’t become too serious of an addiction.

Fiona L.F. Kelly is a writer, editor, and podcaster. She has published numerous articles about all things gaming and pop culture on websites all across the internet, was also a writer for Trinity Continuum: Aberrant 2e, and has been published in books and magazines. She is an editor for the pop culture and media website GeekGals.co. In addition to her writing and editing, she has also been a guest and host on several podcasts. She hosts the Project Derailed podcast Big Streaming Pile, produces and performs on Fables Around the Table, and plays the githyanki pirate Rav’nys on Tales of the Voidfarer. Buy her a coffee: ko-fi.com/fionalfkelly
Previous Post (p) Gencon Derailed - Day 2
Share
Next Post (n) Gencon Derailed - Days 3 and 4