Tom: Today, I played a game of 13th Age and a game of an unpublished RPG called Playthings.

13th Age is a pet favorite system of mine that I don’t get many chances to play, so I was excited for it. 13th Age is an homage to D&D that turns the dial up to 11 and introduces some modern storytelling game ideas.

I chose a pregen half-elf fighter, and decided that I was the bastard nephew of the Elf Queen (one of the major characters of the 13th Age setting). We went around the table and everyone had some pretty exciting backstories. 13th Age encourages players to make up relationships with the important people in the world, so this was characteristic of how 13th Age works.

The session itself was a little rougher. The GM seemed to me like he was inexperienced and wasn’t entirely sure how to run a session in a comfortable way. He had clearly read a lot of good GM advice and was trying very hard to incorporate it into his GMing, but he seemed like he lacked an intuitive understanding of pacing and controlling the spotlight through a session. Specifically, he came across as impatient, and was unwilling to slow down enough to let a scene develop naturally. Several times, I tried to set up what I thought was an interesting interaction, but before we could get very far another player would interrupt, and we would never get back to my original idea.

Playthings is an RPG based on the idea that you are a living toy, basically like in Toy Story. The system is a fairly simplified dice pool system, so it leans pretty heavily on atmosphere and the players at the table to work as a game.

We started the game by coming up with our own characters using the game’s simple character creation system. I came up with a He-Man knockoff toy called Acton Man (the “i” in “action” was omitted, presumably unintentionally).

The GM was absolutely on point for this game – his voices were great, his descriptions were evocative, and the adventure was the perfect length. He knew exactly what he was doing and executed it flawlessly. The players were mostly pretty good as well. The session was some of the most fun I’ve had at a con game.

I don’t know if I could ever effectively GM this game – the rules are very light, and I don’t think I’m clever enough to come up with adventures that wouldn’t end up feeling repetitive. But for a one-off convention game, it was close to perfect.

Fiona: For me, the day started by waiting in line for the Critical Role Q&A with Matt Mercer, Marisha Ray, Laura Bailey, and Travis Willingham. We got in line an hour early, so we were able to snag seats right at the front of the auditorium.

Admittedly, I am still a newbie, as far as Critters go. However, this panel was hilarious. I saw Laura in particular last year at the Titansgrave Q&A, and she was just as funny and charismatic (though, embarrassingly, I still haven’t seen Titansgrave). I was surprised by the quality of questions asked by the fans. Usually at panels, there’s at least a few questions that I find totally irrelevant or otherwise not very clever–often by people who merely want to say hello to the people sitting on the panel. Even with the weakest questions (which were still at least funny), however, the cast gave insightful and interesting answers.

After the panel, we went to get autographs from the Marisha and Matt at the Green Ronin/Geek & Sundry booth. They weren’t lining people up until 12:30, half an hour after the panel ended, so there wasn’t as much of a mad rush to get to the booth. However, the whole process was very frustrating. We were told to not be near the booth if we were simply waiting for the signing and to come back at 12:30. Fair enough. So we came back at 12:29. We were standing in front of the table when they called for a line to begin forming. The person next to us was chosen to be number one, so Nick and I went to get into line. However, it was unclear where the line actually was (people were also checking out Green Ronin merchandise) and everyone was shoving their way into the mass, so Nick and I ended up being numbers 51 and 55 in line, respectively. The cut-off for the signing was 50. We were, however, able to get Travis’s and Laura’s signatures later in the day.

Now, I don’t blame Green Ronin nor Geek & Sundry for this at all. I’m a huge fan of both of theirs, and it was simply an unfortunate situation and set-up. I usually love having two of my favorite companies share a booth, but with all the hype around the autographs, it just didn’t work this year. There was really no good way to do the signing at that location. You had a bunch of Critical Role fans faking looking at merchandise, and thereby blocking real costumers, because they knew from the first time (as well as con experiences) that the line would be filled up immediately. However, having more than 50 people in line would block their booths or the others in the aisle. The walkways in-between vendors are congested even without massive lines forming, so even when we weren’t able to get signatures at the first signing, we were unable to move out of the way for a few minutes due to traffic. All of the Critical Role events were added very late, so, hopefully, if they do something similar next year, they sell tickets beforehand to avoid a mad rush in the vendor hall.

Finally, we ended the day by playing Mutants and Masterminds, one of my all-time favorite RPGs (and a Green Ronin game!), and it was one of the better convention one-shots I’ve played. Our GM was really excellent at going with whatever we wanted to do, and we were paired with a really chill group of players. Everything about the game just worked.

I also have to rep Granite City Food & Brewery. We saw it yesterday and decided to try it today. Excellent mac & cheese and beers. Also, the service was awesome.

Nick: Gen Con Day 2: as customary, the sheer level of activity continues to escalate from the day prior. This year was no exception. The day started out with Fiona and I jumping in line for the Critical Role Q&A. We were there over an hour early and there was already a decently sized crowd of critters congregating outside of Ballroom 500. Before long we were let into what I like the call “the holding pen,” the non-air-conditioned room where they line everyone up before they actually open the doors to the auditorium. 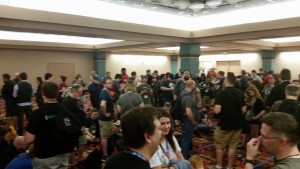 We got our seats and ended up third row and center. Travis, Marisha, Laura, and Matt came out and it was a very pleasant and fun Q&A. Despite the vast amount of people that filed in behind us to fill most of the hall, the panel felt very chill and casual.

As Fiona mentioned, after the Q&A was the signing with Matt and Marisha at the Green Ronin Publishing booth. This was generally poorly planned and resulted in many strange side effects – those that explicitly ignored the instructions of the booth workers were the ones guaranteed in the signing. For doing as instructed, I ended up being literally person 51 of the 50 limit. At least I had the foresight to grab a ticket for one of Matt’s other signings.

We grabbed some lunch over at Granite City Food and Brewing in the mall then did some more exploring of the vendor hall, as we have still not seen anywhere all it has to offer. I bought some miniatures.

We decided to give the Green Ronin Critical Role signings another go with Laura and Travis’s signing at 3pm. We had better luck this time but not due to any real improvements on the system.

Travis and Laura were both incredibly cool and I enjoyed the conversation we were able to have, as fleeting as it was.

After a little bit more vendor exploration in which I bought some D&D miniatures (including a Pugwudgie, just because of the Ilvermorny house) we grabbed some snacks and headed to my only game of the day, a Mutants & Masterminds game.

This game ended up being a lot of fun. We were basically extorted into working for a shadowy figure via the use of tracking/explosive bracelets and the kidnapping of loved ones. I don’t think our GM was expecting us to attempt to get out of this arrangement and double cross our “employer” nearly as quickly as we did. But when the mission we were given was to steal shit from “totally not Tony Stark,” why wouldn’t we convince him to use his tech wizardry to hack the bracelets?

My character was basically a mash up of Reaper from Overwatch if he was a man-out-of-time WWII super soldier like Captain America.

I basically played Reaper the entire game. It was a good time.

I am excited for tomorrow. A couple games on the docket and Critical Role LIVE!

Fiona L.F. Kelly is a writer, editor, and podcaster. She has published numerous articles about all things gaming and pop culture on websites all across the internet, was also a writer for Trinity Continuum: Aberrant 2e, and has been published in books and magazines. She is an editor for the pop culture and media website GeekGals.co. In addition to her writing and editing, she has also been a guest and host on several podcasts. She hosts the Project Derailed podcast Big Streaming Pile, produces and performs on Fables Around the Table, and plays the githyanki pirate Rav’nys on Tales of the Voidfarer. Buy her a coffee: ko-fi.com/fionalfkelly
Previous Post (p) Gencon Derailed - Day 1
Share
Next Post (n) Mani Mondays: Espionage Cosmetics Review