Tom: Day 1 was pretty relaxed for me. I didn’t have any events planned other than catching Suicide Squad at 7:00, so I was free to wander around and check out whatever I wanted. I bought a mug-scoop of random Chessex dice to add to my grab-bag collection. I also got a beautiful hickory Dice Vault from Wyrmwood (it was love at first sight).

I also ended up playing in a playtest for a game tentatively titled Rum Runners. It was a fun, fairly quick card-based board game about trying to sell booze during prohibition. It had a good balance between trying to sell your own hooch vs trying to screw over your opponents. The developer was also very nice and made a point to write down our feedback and thank us for our time. You can check him out at brokenmask.com. 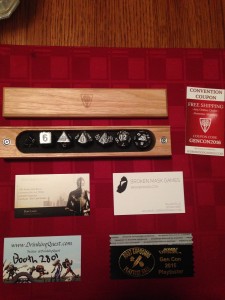 The final event of the evening was Suicide Squad. The movie got pretty mixed reviews from our viewing group, but I personally liked it. The characters were all interesting and fun to watch. The plot made little sense and the editing was weird, but meh, I’m a sucker for fun lines and quirky goofballs with guns.

Fiona: This year, I decided to only do one game on the official opening of Gencon (we all know that the real opening is the Sun King Brewing Tapping Party Wednesday evening). I spent a lot of time in the vendor hall browsing all of the cool gamer swag. As always, I got the official Gencon dice set (with the bonus d6) from Crystal Caste, and I also got two sets from Chessex. I also spied a gremlin D.Va shirt that I may have to pick up later in the weekend.

Tom also was very sweet and bought me a Gencon travel cup since I had forgotten my water bottle. It was definitely worth the investment. The cup holds quite a bit of liquid and is extremely well insulated. It also was about the price I expected it to be. Gencon sold it for $15 when I have seen similar, smaller travel cups for at least $12. Additionally, I managed to win an exclusive Critical Role poster from the Geek & Sundry booth. I ended up giving it to Nick, the biggest Critter on Project: Derailed, but ended up being given another by our friends who had both won a copy and had an extra as a result.

Nick and I played a Savage Worlds game called “Didn’t I Just Kill You?” It was a pretty fun game. Though it had some issues, I definitely enjoyed myself and it was one of the better introductions to a new system that I’ve had at Gencon. Afterwards, we went to see Suicide Squad. You can read my full spoiler-free review here.

I also have to mention the delicious food we ate. First, we ate from a food truck, Island Noodles, which is probably the best food truck food I’ve ever had. For dinner, we had P.F. Chang’s. I know this is a big chain restaurant, but I had only had it once before this and Tom nor Nick had ever had it. They make a mean tofu.

Nick: It’s easy to be stricken by sensory overload on day 1 of Gen Con. After a a leisurely Wednesday evening sampling beers in the Sun King Brewing Beer Garden during their tapping of the Official Beer of Gen Con (“Twenty Sided Rye” this year) the sudden excitement of the opening ceremony and rush of thousands of nerds filtering into the vendor hall is enough to bog down anyone.

I’ve never been one to go into Gen Con with too much of a specific shopping list like I know a lot of people do. I tend to just mosey the entire hall and make mental notes on who I might want to throw money at then come back later. I did grab a copy of the Rick & Morty Total Rickall Card Game though. I saw demos of it at Origins Game Fair earlier this year and knew I had to get it.

Fiona and I headed over to the Marriott for a Savage Worlds game. The setting was inspired by Stargate, and while I have never been a fan of the show, it seemed like a pretty cool premise. The setting was cool and the game system pretty solid but the GMing left more to be desired, but all in all though it was a fun time.

After the game we sat down for food then went to see a premier showing of Suicide Squad in the theater in the mall conveniently attached to the convention center. A highlight of this endeavor was the very comfortable electronic reclining seats. The movie was fun but had lots of glaring problems. I did enjoy it but the great acting by Margot Robbie and Will Smith could not help me overlook the mess the film ended up being. I enjoyed it far more than BvS and it is a step (albeit small one) in the right direction for the DCEU, in my opinion.

I also was the first to spot a wild Matt Mercer. I guess that means I already won Gen Con.

Fiona L.F. Kelly is a writer, editor, and podcaster. She has published numerous articles about all things gaming and pop culture on websites all across the internet, was also a writer for Trinity Continuum: Aberrant 2e, and has been published in books and magazines. She is an editor for the pop culture and media website GeekGals.co. In addition to her writing and editing, she has also been a guest and host on several podcasts. She hosts the Project Derailed podcast Big Streaming Pile, produces and performs on Fables Around the Table, and plays the githyanki pirate Rav’nys on Tales of the Voidfarer. Buy her a coffee: ko-fi.com/fionalfkelly
Previous Post (p) Spoiler-Free Review: Suicide Squad
Share
Next Post (n) Gencon Derailed - Day 2