Spoilers for Critcal Role Episode 4 (obviously). Check out the recap for Episode 3 here.

Vox Machina attempts again to take over the duergar warcamp.

The party continued to explore the Greyspine mines. They came across a duergar warcamp, and, using illusions, successfully tricked many of their number to run off of a cliff. While exploring alternate ways across the giant chasm that separated the party from the warcamp, Keyleth and Vex found Clarota, an illithid outcast who has asked for their help in stopping K’Varn and freeing his people.

Speaking into their minds, Clarota suggests resting out of sight. They follow him through the goblin village. He chooses a tent for them to hide themselves away.

Vax notices a light up ahead. He and Scanlan leave the tent to investigate.

As they approach the light, they realize that it is their cleric friend, Pike. 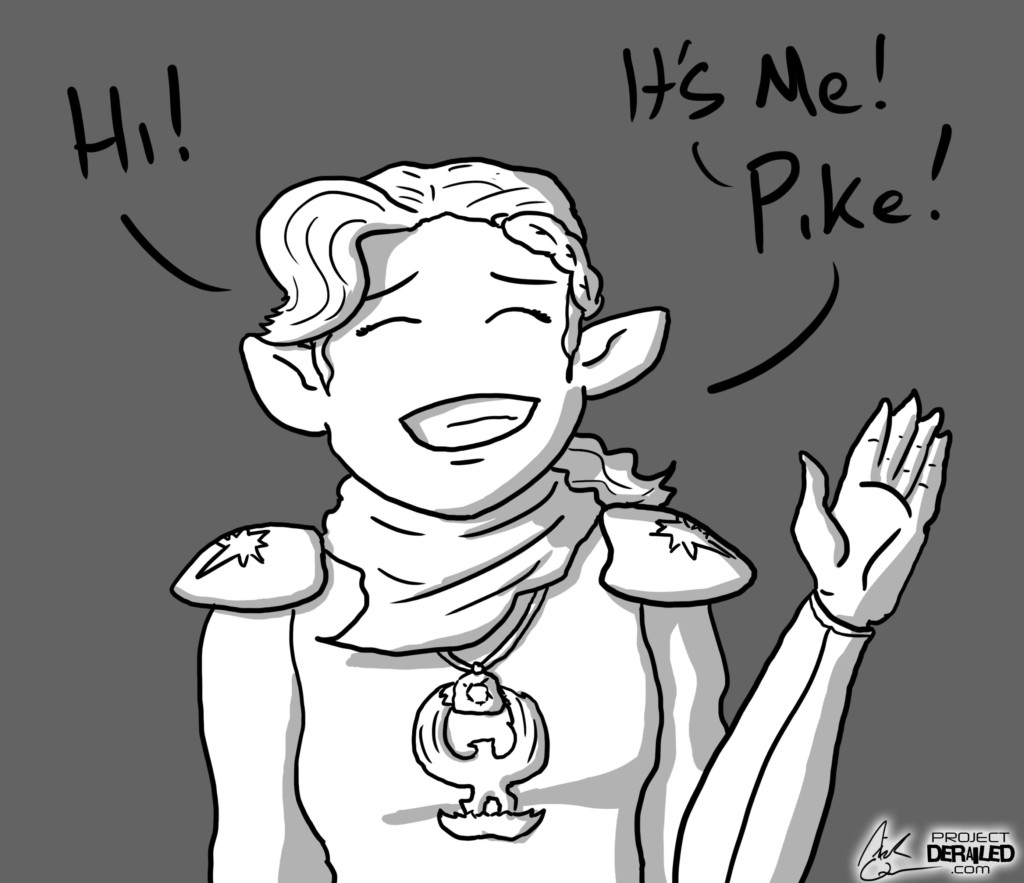 They ask her about the sigil above the abandoned camp. Meditating on the symbol, she sees a vision of Lady Kima carving the protective sigil into the stone.

Vax quickly tells her what they’ve been up to since they been in the mines.

When Pike arrives back at the tent, they all warmly greet her. Tiberius explains to Clarota who she is.

Pike introduces herself to the outcast mind flayer, and he explains to her how he came to travel with the party. He also tells them what he knows of K’Varn.

Clarota: “Not but four months ago, one of my estranged people was captured by these ash-skins and brought within the obsidian walls for what I assumed was interrogation. Long after, the bulk of the duergar people marched back through the long, deep tunnels that led to my people’s colony and attacked. Strangely, before much bloodshed could occur, what I only assume was the next step in this onslaught, the fighting stopped, and the colony allowed the ash-skins to waltz directly into the temple, unharmed, unchallenged, where our elder brain resides.”

They ask Clarota if it would be helpful for them to also wear helmets that block the influence of K’Varn. However, Clarota explains that it protects him from the innate hivemind, and they have nothing to worry about.

Percy points out that they could help one another in their respective tasks. He asks for safe passage and help retrieving Lady Kima in exchange for helping him defeat K’Varn.

Grog puts a pot on his head to protect himself from the illithids.

Clarota asks them to bring him the general from across the chasm. Then, they will combat the forces that corrupt the elder brain. He warns them that the general will be prepared, and that they must find another way into the war camp.

They discuss alternate routes to the encampment. Pike mentions a vision she had where she was pulled through the mine. She says she passed the lake below and traveled across a field of broken glass and bone. They wonder if there is an effective way to blind their enemies.

Despite Scanlan’s protests, eventually they decide to send Vax and Scanlan across to sneak attack the illithid general while the rest create a blinding distraction.

They go to sleep, ready to attack the next morning. They wake up to rumbling. In a rush to get across, they decide to forgo the finer details of their plan.

Turning into an eagle, Keyleth carries the gnomes across the chasm. Tiberius casts fly on Grog. He then jumps on the Goliath’s back to steer him in the right direction, as Grog has places the pot back on his head. Everyone else climbs onto the carpet.

They cross over the chasm, hidden by darkness. No one in the war camp seems to notice their presence. 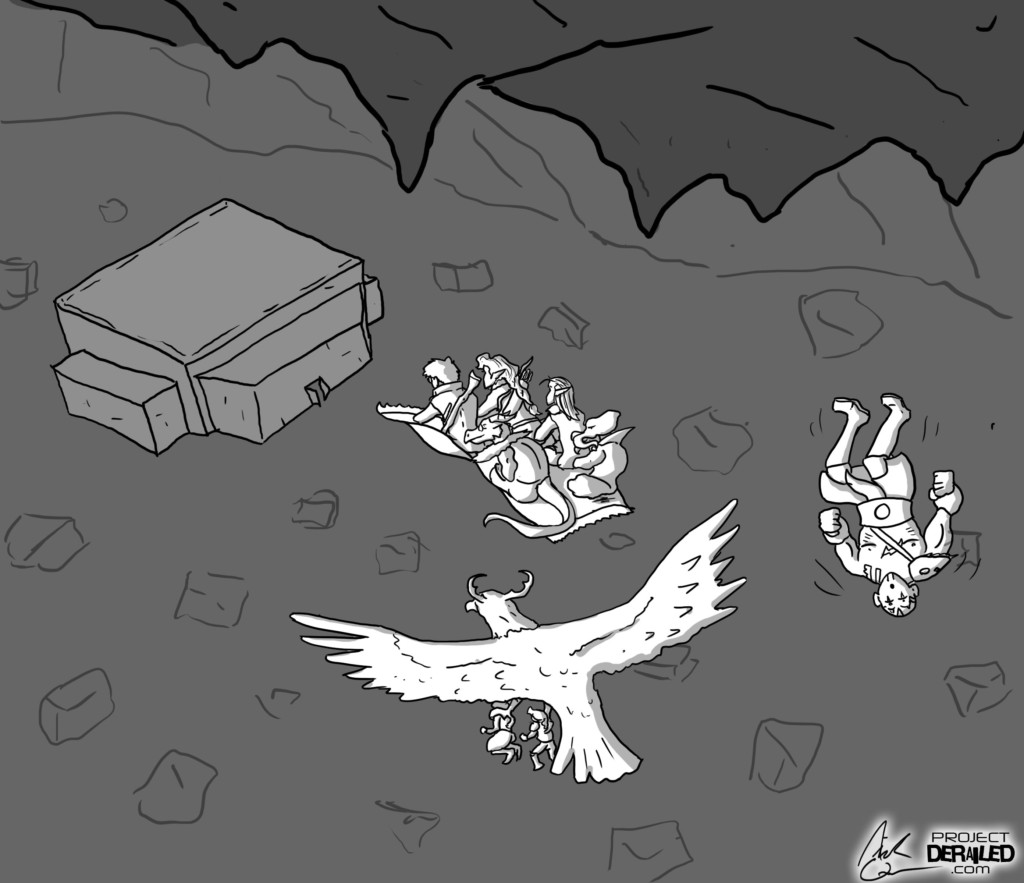 They decide to land on a nearby roof and attempt to grab the illithid.

They enter a dormitory. Finding nothing of interest, they continue into the hallway. Vax throws a gold coin to distract the guards, and he and Scanlan continue on their way. Vax assassinates one of the guards as they go.

They reach the central chamber of the barracks. Inside is the illithid, the duergar general, and more guards. They slowly enter the room. Scanlan and Vax look for traps, finding none.

Scanlan sneaks behind the mind flayer. He takes a bucket of goblin shit and throws it over the illithid. They hear Clarota give them them signal to go. 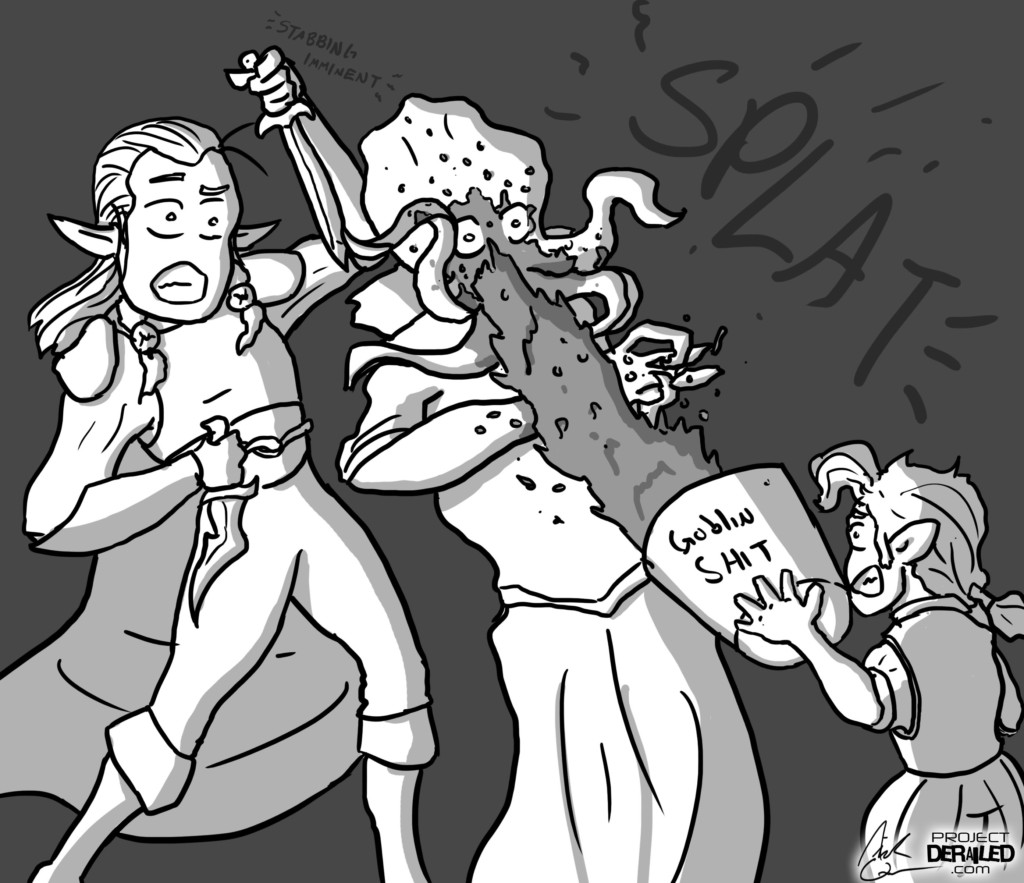 Vax attacks the illithid. He sinks a dagger into the back of his neck. The illithid turns around, furious. He pulls the dagger out of his neck as the surrounding duergar draw their weapons.

Vax attacks the illithid again, killing him. The duergar general runs across the table, embiggening himself and swinging a jagged black, flaming, metal warhammer at Vax. The hammer connects, but Vax dodges most of the damage. He ducks out of the way of the second swing.

Grog picks up his axe and smashes through the roof of the building. Everyone from the roof except Tiberius jumps down into the room.

The duergar cover their eyes, trying to prevent the burning brightness from Grog and Pike.

The duergar rush to attack the approaching party. Tiberius casts obelisk of stone from the roof, crushing three of the duergar. He tries to cast blight on the general, but he shrugs most of it off.

Scanlan uses dominate person to overtake the general’s mind. He tells the general to order the guards to stand down. Keyleth uses grasping vines to bind the general’s hands.

They feel a tremble in the ground once more. They stay very still, trying to not bring attention to themselves.

Suddenly, a large armored four legged creature bursts from the ground with a shriek.

The party begins to attack the bulette. Vax runs over to the bulette and stabs it in its underbelly.

The general breaks from Scanlan’s spell and grasping vines. He grabs his weapon.

Grog smashes through the bulette’s armor. Vex looses an arrow, piercing its armor.

The bulette bites Percy, taking him by the arm.

The general and duergar attack the party.

Scanlan goes to hug the general. When he wraps his arms around him, he banishes the general.

Keyleth turns into a rhinoceros. She charges into the bulette.

The bulette jumps over Keyleth. It lands on Scanlan and Clarota. Dropping Percy, it attacks Scanlan. It tears into him, and Scanlan goes unconscious.

Pike rushes over to Scanlan and heals him.

Vax runs up to the bulette and stabs it in an attempt to save Scanlan.

Grog attacks the bulette. Reaching into its mouth, he pulls out the bulette’s tongue. Then, he punches the bulette in the brain through its mouth. The bulette dies, going limp. He looks to the deurgar. 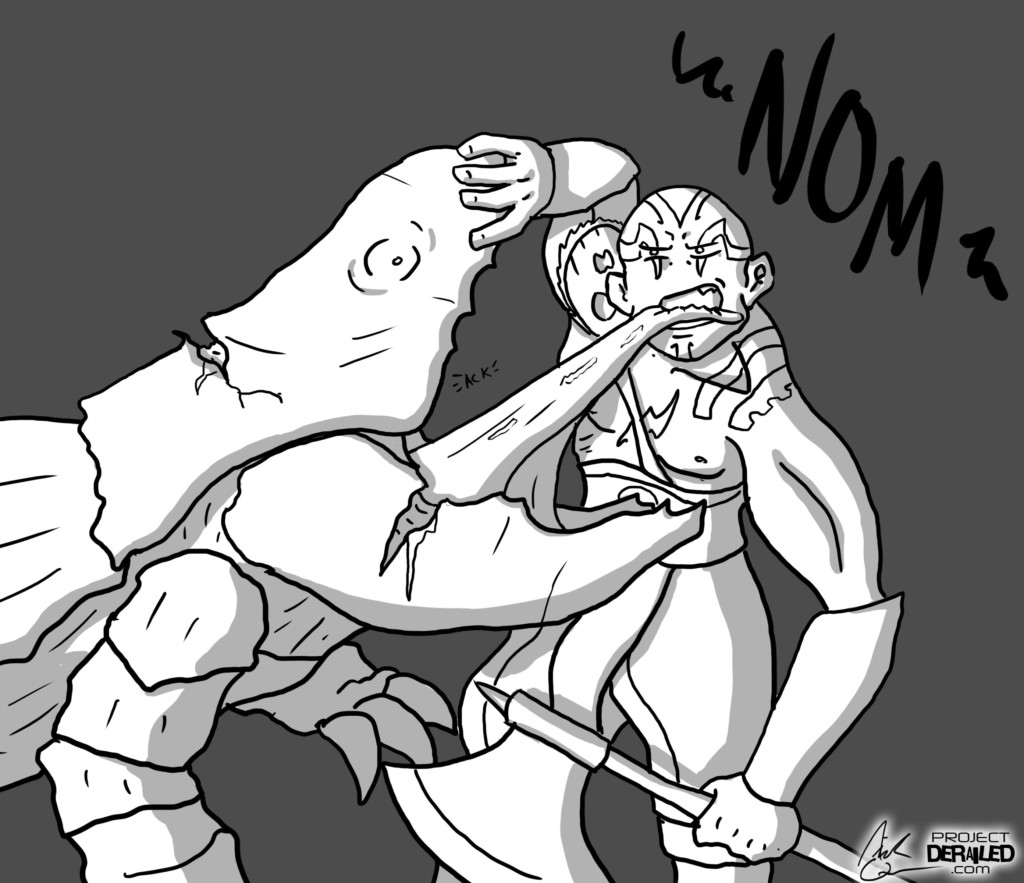 Fiona L.F. Kelly is a writer, editor, and podcaster. She has published numerous articles about all things gaming and pop culture on websites all across the internet, was also a writer for Trinity Continuum: Aberrant 2e, and has been published in books and magazines. She is an editor for the pop culture and media website GeekGals.co. In addition to her writing and editing, she has also been a guest and host on several podcasts. She hosts the Project Derailed podcast Big Streaming Pile, produces and performs on Fables Around the Table, and plays the githyanki pirate Rav’nys on Tales of the Voidfarer. Buy her a coffee: ko-fi.com/fionalfkelly
Previous Post (p) SideTrack - Discussions & Doodles: Stranger Things 2
Share
Next Post (n) Crit or Miss: Tales from Tanner's Palace