My recap of Episode 75 can be found here.

In order to earn their freedom from enslavement to the fire giant Jarael and gain the final vestige, Vox Machina finds themselves tasked with killing Ghurrix, a pit fiend that wronged the giant.

The party met with a free fire giant, Whaska, to discuss the Dawnmartyr armor. He directed them to Jarael, another fire giant who likes to bet on card games. Scanlan challenges her to cards and proceeds to lose everyone’s freedom. Jarael offers to give them back their freedom and the armor in exchange for taking care of a pit fiend for her. The party (except Scanlan) decides to all dress up as Vax and Vex and advertise themselves as sextuplet slaves to lure the pit fiend to them. They also buy two celestial slave boys. Keyleth tried to sneak attack the pit fiend with feeblemind to no avail.

The attack begins. Vex quickly yells at the aasimar slave boys to go back inside as she prepares to attack Ghurrix, the pit fiend. She releases Trinket from her locket and begins to loose arrows towards the fiend.

Keyleth releases a watery sphere to trap the erinyes accompanying Ghurrix. . Grog attempts to grapply the fiend, and succeeds. The party, since they are out in the open, weigh their options if they were to simply leave. Though he is still grappled, Grog is unable to bring him down. 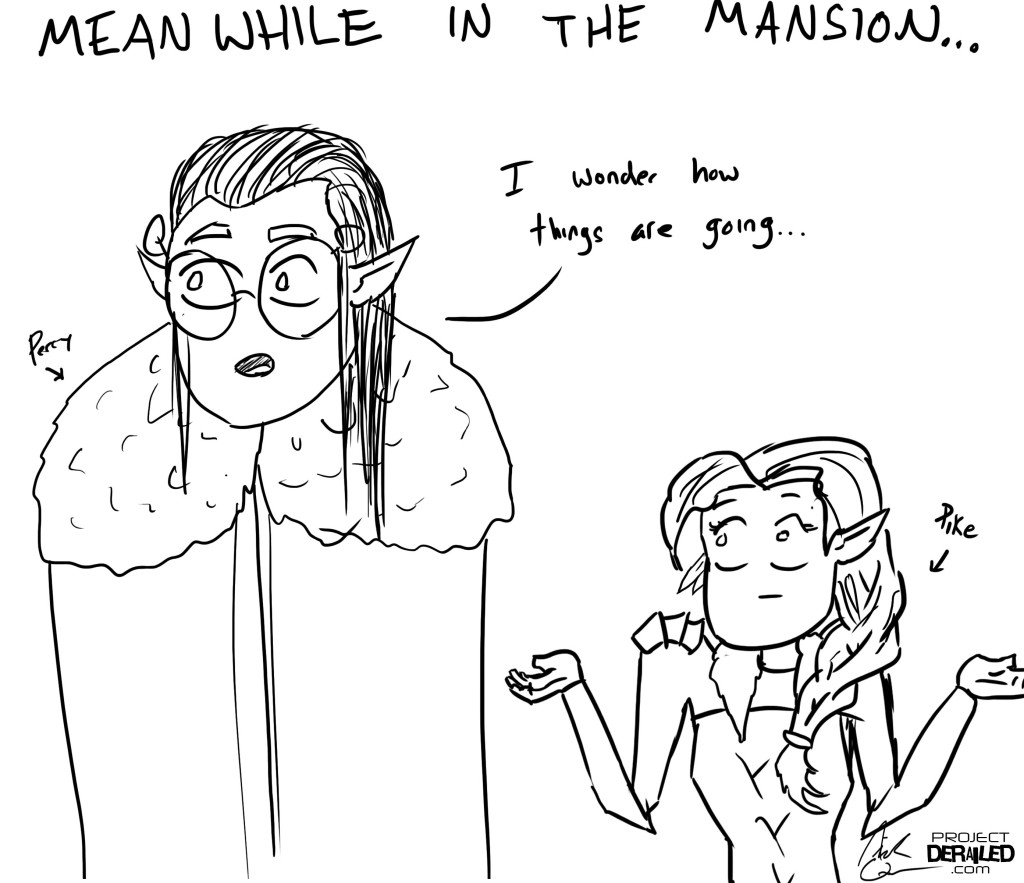 During the fight, Percy comes out from outside the mansion to see that everything has gone horribly wrong. He fires at the pit fiend, hitting him hard. However, shortly after, Ghurrix is able to break free from Grog’s grasp, and the erinyes also escapes. He flies into the air as the party continues to attack him. The boys run back into the mansion.

Pike exits the mansion. She attacks Ghurrix and casts aid on Trinket, Scanlan, and herself. Fear begins to sink in for some party members, but they all manage to shake it off.

Vax successfully attacks the erinyes. He then grabs Keyleth and passionately kisses her. After a few more attacks from Grog, the erinyes flies further away from him.

During the attack, Ghurrix attacks Vex, knocking her unconscious. She falls, but manages to avoid the rivers of lava and instead lands on the stonework by Pike. 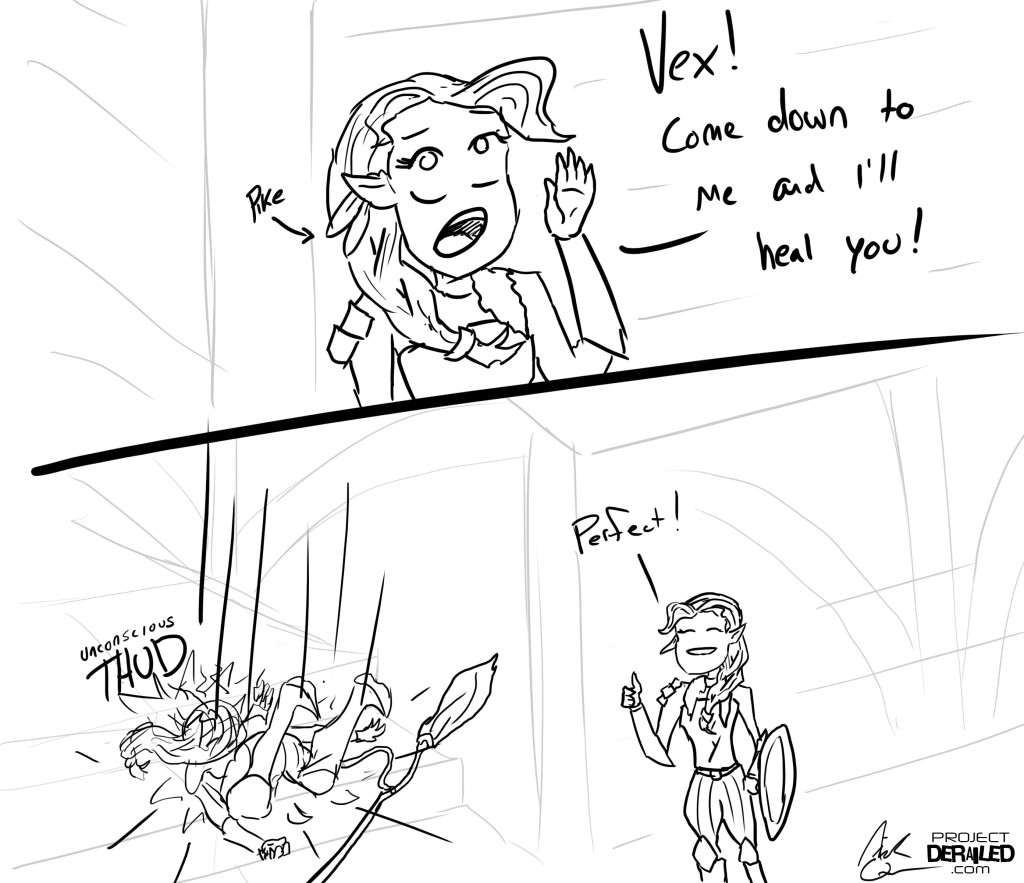 The erinyes attacks Keyleth, poisoning her. She barely holds onto consciousness.

The Illuminated enter the fight. They recognize Ghurrix, but not anyone else.

Ghurrix: “You have angered the city guard.”

Grog tries to continue to attack Ghurrix, but falls into the lava instead. 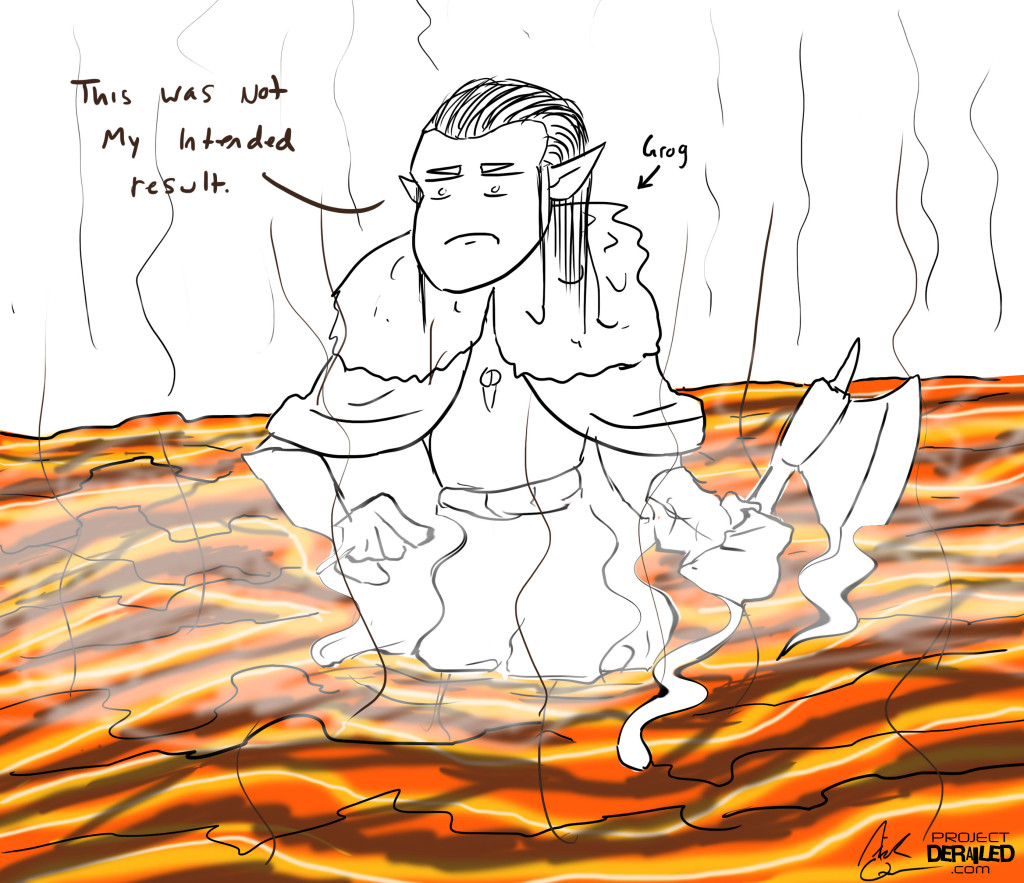 Percy and Ghurrix both begin to plea with the guard to help them. The efreeti enter, and begin to attack Vox Machina. Scanlan sings out with cutting words to force the fiend to miss one of his attacks on Pike, but he knocks her out with his others. Scanlan feels Mythcarver begin to vibrate.

Keyleth manages to blind and kill the erinyes using sunbeam. Grog pulls himself from the lava, grabs the unconscious Pike, and heads back to the mansion. Percy gives Pike a potion, waking her. Vax attacks the fiend again and then follows them into the mansion.

Vex and Percy head toward the mansion, but she is knocked unconscious and poisoned before she is able to enter. The pit fiend continues to attack her and Scanlan. Mythcarver whispers to Scanlan to use it, but he ignores it. The spirits of 100 bards empower Scanlan, and he attacks Ghurrix four times, missing one of the attacks. Ghurrix is destroyed.

More efreet are approaching. Keyleth hurriedly heads back to the mansion, grabbing Vex along the way. Vax brings her back into consciousness.

Scanlan attempts to modify the memory of the efreeti in front of him and succeeds. The guards believe that Ghurrix was a traitor and Scanlan saved them. They shake his hand and leave. 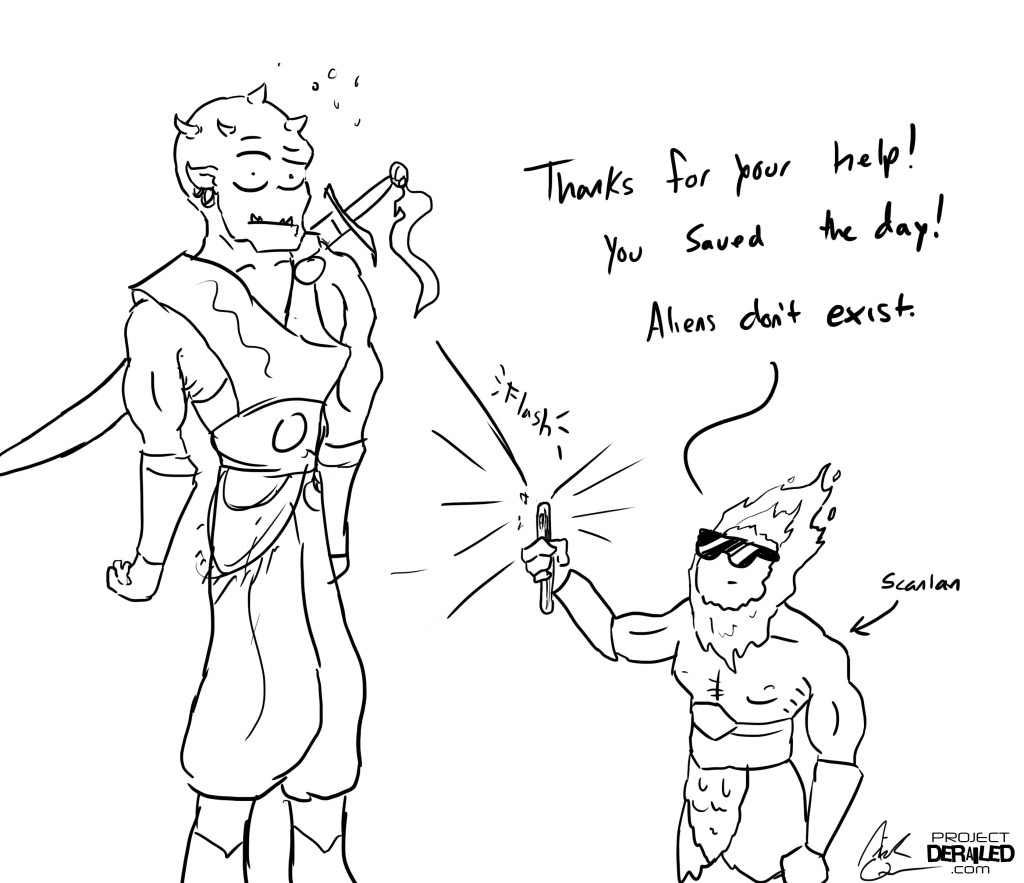 Vex loots the erinyes and finds a rope of entanglement, a sword, and boots. They all go into the mansion and rest. Mythcarver is awoken.

In the mansion, Scanlan sings to the other party members to further heal them. They divvy up the items. Percy takes the boots of spider climbing and Grog takes the rope of entanglement.

Vex goes over the slave boys to talk to them. They tell her that their mother sold them into slavery a year ago. Vex reveals to them that they aren’t slavers. They reveal to her that they do not want to go back to their mother and that they like snow. Percy suggests bringing them back to Whitestone. Vex gives them chicken. The party has dinner and toasts to Keyleth and Scanlan for killing their enemies.

Vax: “To Scanlan and Keyleth, the two biggest fucking heroes I know!”

The party points out that Vax today has kissed someone who looked just like his sister and a small man with a flaming beard. They ponder about what that could mean.

After they rest, the party heads back to Jarael’s. When they arrive, they reveal that Ghurrix died, and he died in disgrace. Jarael is pleased with this. She grants them their freedom and gives them the Dawnmartyr armor. Scanlan, still feel bold from earlier, suggests another card game, but everyone quickly objects.

Pike asks about the ruby shield that was offered to them earlier, but Jarael says that they cannot have it.

As they leave Jarael, they realize that they still owe a favor to Cenokier as well. Since they have to get back to their own plane as quickly as possible, they go to see what the favor is.

Cenokier asks for a simple favor. He hands them a small box containing his late wife’s ashes. He asks them to bring her to Vasselheim to be buried.

The party talks a bit more before planeshifting (along with the aasimar boys) back to Fort Daxio.

When they arrive, the fort is under siege and burning to the ground.

Fiona L.F. Kelly is a writer, editor, and podcaster. She has published numerous articles about all things gaming and pop culture on websites all across the internet, was also a writer for Trinity Continuum: Aberrant 2e, and has been published in books and magazines. She is an editor for the pop culture and media website GeekGals.co. In addition to her writing and editing, she has also been a guest and host on several podcasts. She hosts the Project Derailed podcast Big Streaming Pile, produces and performs on Fables Around the Table, and plays the githyanki pirate Rav’nys on Tales of the Voidfarer. Buy her a coffee: ko-fi.com/fionalfkelly
Previous Post (p) Nerdiest Talk Show on Earth: Mystic Messenger
Share
Next Post (n) Nerdiest Talk Show on Earth: Fantastic Beasts and Where to Find Them