Spoilers for Critcal Role Episode 5 (obviously). Check out the recap for Episode 4 here.

Vox Machina escapes a war camp and explores the tunnels below the Greyspine mines.

The party set out to look for Lady Kima. They followed her trail deep into Greyspine mines. Along the way, they encountered duergar and illithids who have teamed up with an entity called K’Varn. They teamed up with an outcast illithid named Clarota. With his help, they infiltrated a duergar war camp and took a duergar general hostage.

The dwarf general looks up at them.

“So, you’ve found a way in. What’s your purpose? What do you want with me?”

They ask him about Lady Kima. Vax threatens him to tell him the truth. Reluctantly, he admits that she was captured and taken to King Murghol. He says that she is being tortured in the dungeons of Emberhold. In exchange for being left alive and his building in tact, he offers them the location of the secret entrance to the throne room of Emberhold.

Vox Machina considers this and discusses accepting, but not before taking all of the general’s weapons, armor, and items. Clarota offers to read his mind.

The general begins to struggle and begs them to let him go, saying the mind reading wasn’t necessary. However, Clarota pushes forward, and blood begins to rush from the general’s nose.

Vax asks if he knows anything about K’Varn.

Clarota: “He has not seen K’Varn, but knows a bit of his nature. I cannot read it, but we could press for more information.”

Vax warns the dwarf that Clarota is not as patient as he. He tells the dwarf that he and his men can throw their weapons into the chasm before fleeing the mines, but he must tell them everything he knows first.

The general explains that K’Varn is a being that knows and sees all. He also says that K’Varn and the others who dwelled in the mines fought for centuries, but K’Varn was the first to initiate the recent alliance. K’Varn, he says, gave them purpose and growth.

He also admits that behind two streams of lava, there is a secret entrance to Emberhold.

He tries to leave, taking his weapons with him. Grog tells him to leave the warhammer, but the dwarf argues that wasn’t the deal. After a bit more arguing, the general mutters a spell and turns invisible.

Vox Machina draws their weapons. About twenty feet away, the dwarf reappears. He stands in place, totally frozen. Vax throws a dagger and Grog throws his warhammer.

Clarota goes over to the general. He goes into his face, tentacles first. Clarota slurps out the general’s brain, and lets him fall to the floor, dead. Clarota tells the party that the general was telling the truth about the secret entrance. Tiberius and the others loot the general’s body.

They all realize that they have no way out of the barracks and tent city. Grog begins to carve some of the natural armor from the bulette, but, before he can get very far, alarms begin to sound.

They hastily begin to make plans for their escape. They decide to exit the building through the ceiling. Vex sprinkles the dust of tracelessness on the ground and Keyleth casts pass without a trace. She turns into a giant eagle and picks up Scanlan and Pike. Tiberius casts fly on Grog, and the rest of the party gets on the flying carpet.

Though they try to sneak out quickly and quietly, thirty duergar guards rush into the room. They throw javalins, hitting Grog, Keyleth, and Percy.

Below them is a fiery explosion as Tiberius casts a fireball towards the duergar. Vax ignores his sister’s begging to go and retrieve Trinket as he flies the carpet around the war camp.

Keyleth, facing attacks from the duergar, loses her eagle form. She, Scanlan, and Pike all begin to fall from the sky. 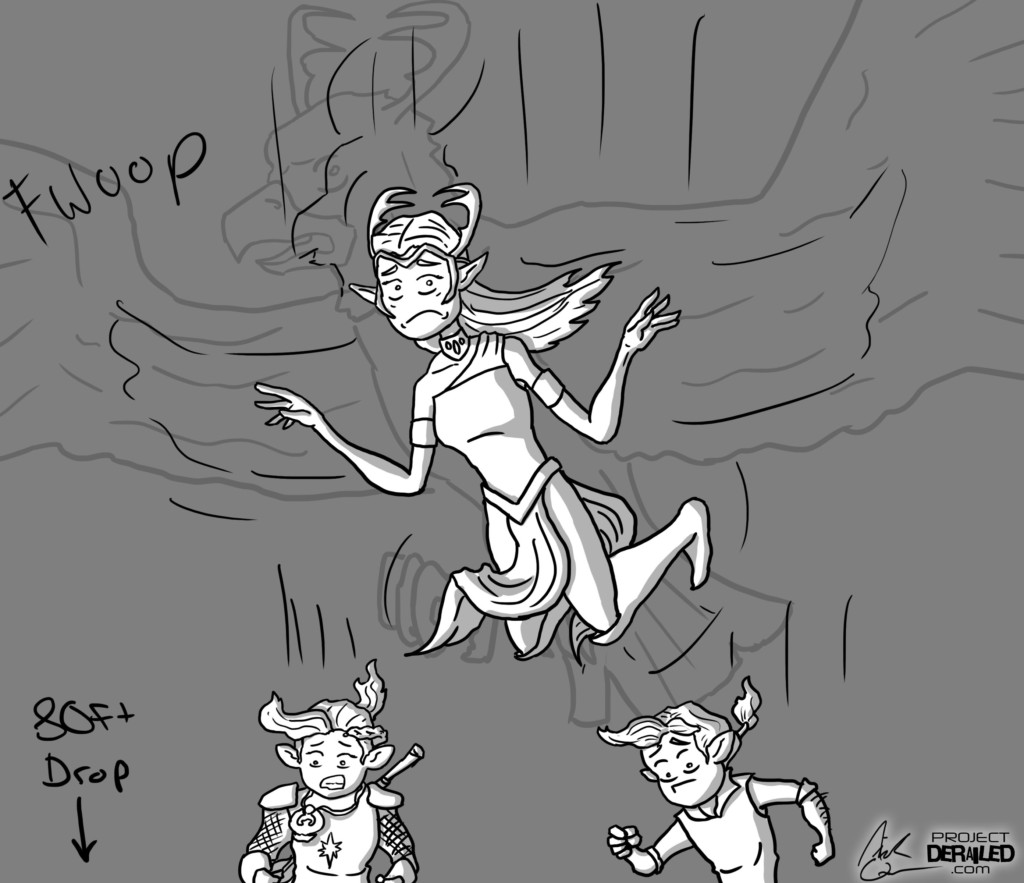 Vax maneuvers the carpet so their three party members fall onto it. Tiberius, in the choas, loses his concentration on fly, causing Grog to also plummet from the air. The carpet, unable to support everyone’s weight, careens through the air.

Tiberius jumps off the carpet to try to save Grog. However, in the choas of the moment, he is only able to cast featherfall on himself before hitting the ground.

Grog crashes into the ground while the others have their fall slightly broken by the carpet. Vax grabs Pike and Vex grabs Scanlan to try to cushion the gnomes’ fall even more. Percy and Scanlan fall unconscious in the impact.

Though they are just outside of the camp, the mob of duergar will soon reach them.

They bring Scanlan and Percy back to consciousness and heal themselves. Clarota levitates slowly towards them. He struggles in the air as arrow hit him. 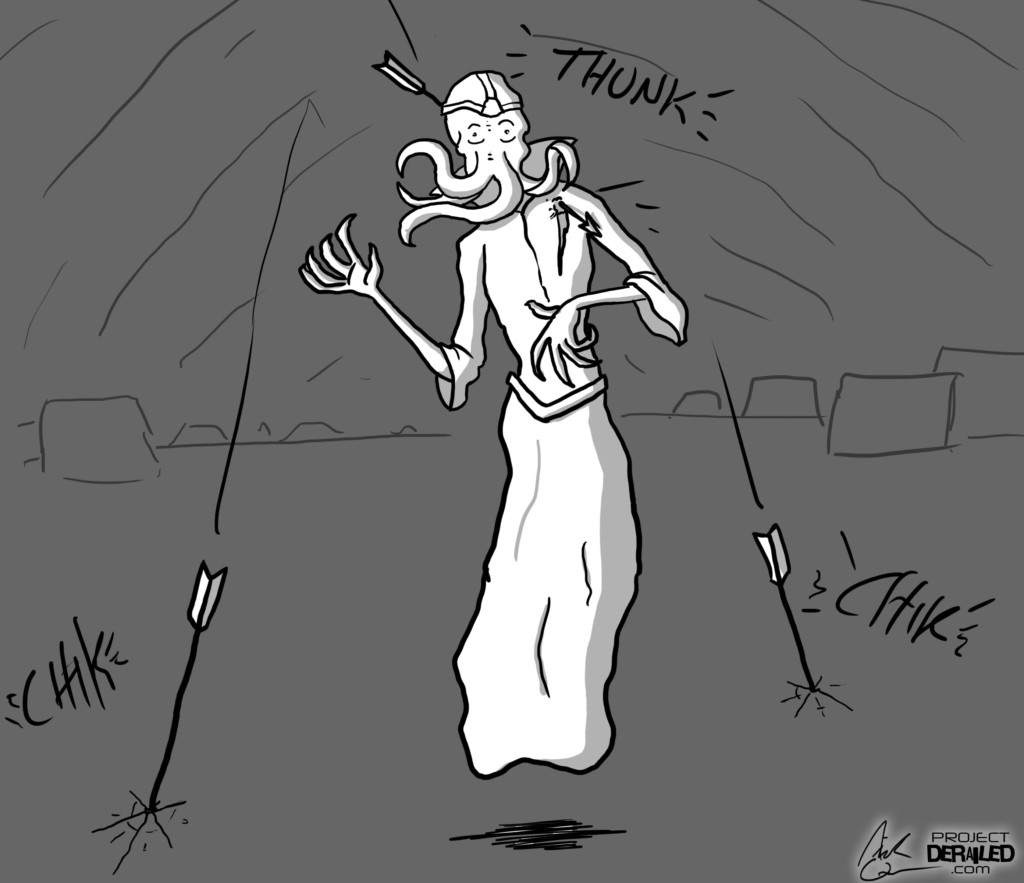 Tiberius casts glacial blast, forming a slide. Clarota slides down it towards them. The rush towards the tunnel. Once they are inside, Keyleth uses wall of stone to shut off the duergar.

Pike gives Clarota a potion. The wounds across his form begin to heal, but the arrow is still stuck through him. She and Grog pull the arrow out.

They travel through the tunnels. Grog sprinkles dust of tracelessness behind them as they go. They come across two tunnels. Keyleth uses beast sense to guide a bat through one of the tunnels. However, it quickly gets too far away. They decide to take the left tunnel, which descends down.

Grog runs down the tunnel, causing the others to chase after him. They come across an alcove that holds an abandoned war camp. Over one tent, they see another symbol of Bahamut, signaling to them that Kima was here.

They see drag marks that lead down further into the mines.

They decide to rest for the night. Tiberius magically summons pillars to cover the entrances.

As they rest, Vax and Grog, who are taking watch, hear footsteps above them. Vax wakes up his sister, but the footsteps eventually pass.

Pike and Grog tear down the pillars, and the party continues through the tunnels. Vax quickly warns the others that some duergar passed by in the night.

Keyleth uses commune with nature to see what’s ahead of them. She sees only bats.

As they walk, Grog tries to trip Vax. His foot catches the half elf’s, and Vax tumbles to the ground.

Vax: “When the illithid  general is bearing down on your walnut-sized brain, I may be there, or I may not.”

Keyleth asks Pike about her vision. Pike explains that she saw the tunnels and the path the general described. She also saw a single, twisted black soul matter horn. This horn was part of concentrated evil. She said that the evil was so intense that she had to cut the vision off.

Vex asks if Pike can lead them in the right direction. Pike says she can if they come across familiar landmarks. In particular, she mentions a jagged, onyx-colored fortress, a field of broken glass and bone, a cavern of blue crystals where a fungal forest entines a city of marble and jade. Clarota interrupts, adding that the last location is where the illithid colony resides and K’Varn holds the brain hostage.

They pass by lava pools on their way through the tunnels. Ahead, they hear two sets of heavy footsteps and a faint squeaking sound.

The twins scout ahead. They see two giant orges pulling a cart. The twins hide on either side of the tunnel and pull a rope, tripping one of the ogres. 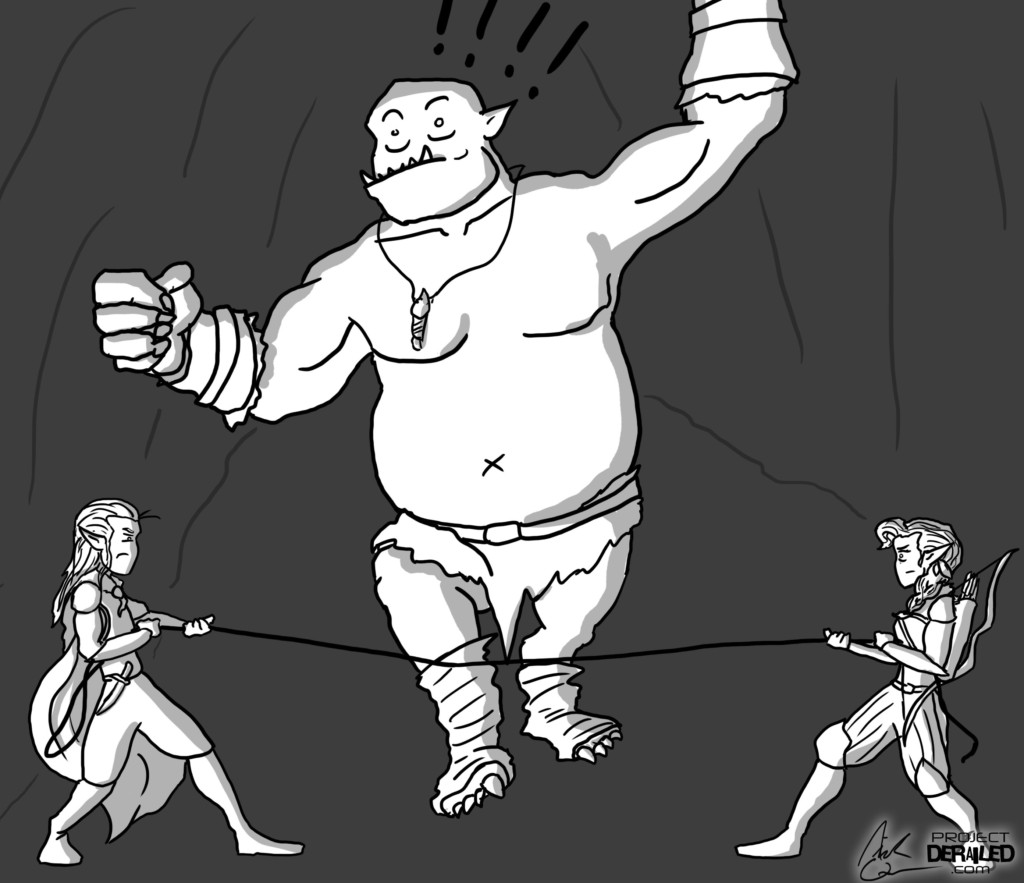 Vax then begins to stab at the tripped ogre, killing it. He jumps away, hiding again. Vex casts hunter’s mark on the other ogre. Using her blazing bowstring, she fires the explosive arrow Percy made her the night before. The arrow hits, and the explosion topples the cart.

Tiberius casts scorching ray at the remaining ogre. All three hit, and the ogre is left barely alive.

The ogre begins to charge towards everyone else. The cart shifts and something amorphous and liquid spills out. A black ooze-like creature begins to move.

Scanlan inspires Grog and casts invisibility on himself.

Vex looses a lightning arrow towards the black ooze creature. The shot splits the creature in half. Vax kills the last ogre.

Percy shoots ice at the creature. It hits, but the ice is quickly absorbed. 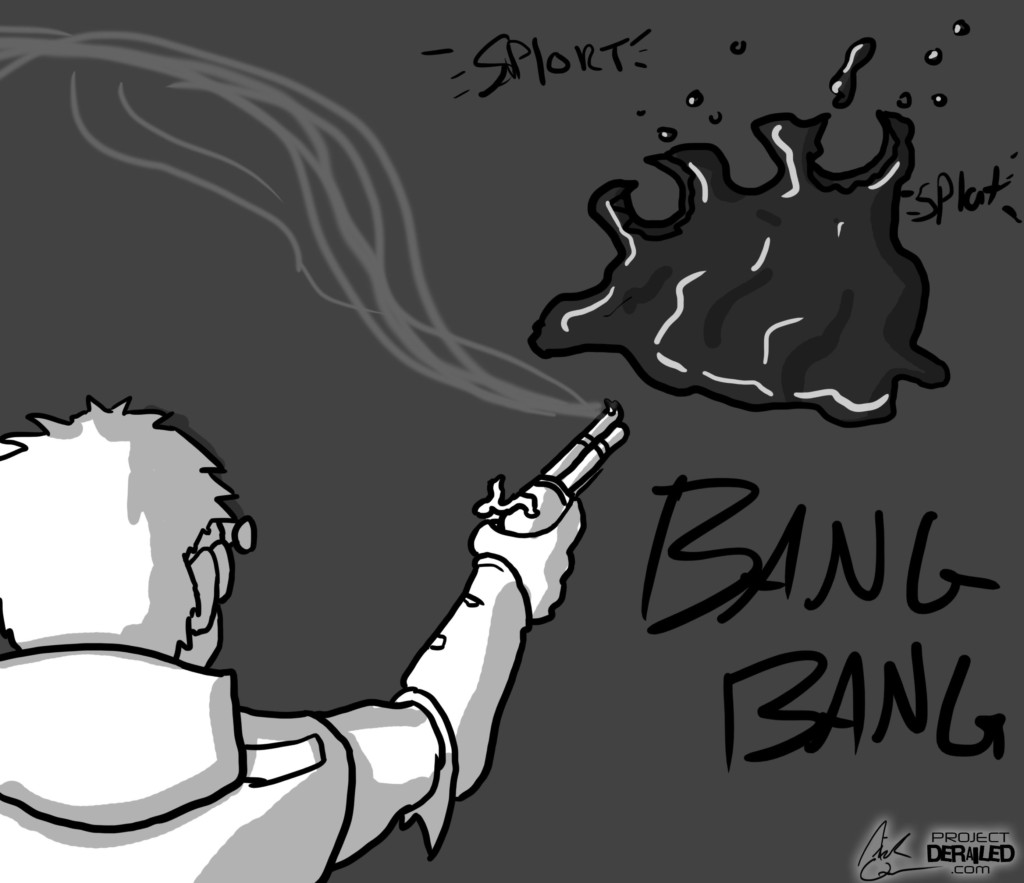 Vax hears clacking noises on the ceiling. He looks up and sees two hook horrors. The creatures begin to attack the party. Tiberius grabs one with telekinesis and throws it into the lava. He casts glacial blast on the other. It misses and creatures an icy spike that juts from the wall.

Vax jumps over the creature in the lava and begins to stab at the ooze creatures.

Keyleth transforms into an eagle and flies behind the ooze. Changing back into herself, she casts thunderwave.

The ooze splashes onto Grog as he attacks it. He falls unconscious from the damage.

Clarota grabs one of the ooze creatures with telekinesis and throws it into  the hook horror in the lava, killing it.

Vex looses two arrows at one of the oozes, killing it. Percy takes aim at one of the other ones and fires two shots, killing that one as well. Keyleth uses her thorn whip to kill the final ooze creature.

Their enemies finally defeated, they search the cart. They find a broken glass containment and many body parts. Pike heals Grog, bringing him back to consciousness. He goes and loots the bodies, finding some gold. He splits the gold pieces between Vax and Pike.

They continue along the tunnels. Thirty minutes later, they come across a familiar cavern. Vex and Keyleth recognize it as where they first met Clarota.

They realize they are near Trinket. Vex excitedly proclaims that they must retrieve Trinket. Having a better understanding of the layout, they know down which path they must travel next.

Taking the flying carpet, they get Trinket. They cast fly so he doesn’t overload the carpet. In the water, they see a creature briefly emerge from the water and retreat.

Pike tells them that she recognizes the location, and she begins to guide them on the right path.

Fiona L.F. Kelly is a writer, editor, and podcaster. She has published numerous articles about all things gaming and pop culture on websites all across the internet, was also a writer for Trinity Continuum: Aberrant 2e, and has been published in books and magazines. She is an editor for the pop culture and media website GeekGals.co. In addition to her writing and editing, she has also been a guest and host on several podcasts. She hosts the Project Derailed podcast Big Streaming Pile, produces and performs on Fables Around the Table, and plays the githyanki pirate Rav’nys on Tales of the Voidfarer. Buy her a coffee: ko-fi.com/fionalfkelly
Previous Post (p) Crit or Miss: Tales from Tanner's Palace
Share
Next Post (n) Crit or Miss - Star Wars Month: Star Wars Edge of Empire & Fantasy Flight Games