Tanner runs Tom, Fiona, and Nick through the RPG Atomic Highway and they become the group affectionately known as The Three Assholes.

TRAINWRECK: the Twitch show where we stream whatever. It’ll probably suck. Catch it LIVE every Monday night at 9 PM ET at twitch.tv/projectderailed!

We will be running a chairty D&D stream for Tal’dorei Day on Saturday, October 14th, 8PM ET at twitch.tv/projectderailed. 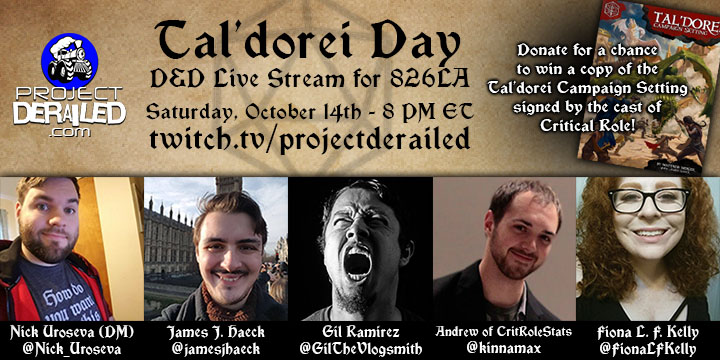 Donors will receive a chance to win a copy of the Tal’dorei Campaign Setting signed by the cast of Critical Role!

Nick is a social media marketing professional and content creator by trade but also dabbles in everything from graphic design, photography, illustration, videography & video editing, animation, and podcasting. He is the Co-Creative Head at Derailed Medial LLC, the creator and Dungeon Master of the ENNIE-nominated podcast Tales of the Voidfarer and cast member on Cape Chronicles and Fables Around the Table.
Previous Post (p) Crit or Miss: WWE Know Your Role
Share
Next Post (n) Crit or Miss: Tal'Dorei Campaign Setting