Spoilers for Critcal Role Episode 2 (obviously). Check out the recap for Episode 1 here.

The party has been tasked with finding Lady Kima. They discover that she has been last spotted entering Greyspine Mines. After some convincing, they manage to gain entrance into the caverns. They find stitched together goblins and other undesirable beasts. Scanlan kills a monster ravaging the mines.

After the battle, the party feels the adrenaline still pulsing through their veins. A hush comes over the crowd. The guards of Kraghammer step through with Nostoc.

Tiberius: “Of course we have! Oh. Sorry.”

Nostoc: “I would like to continue this conversation back in my office if you don’t mind.”

He walks away without another word.

Keyleth, still in Eagle form calls after Nostoc, but he ignores her. Vex casts protection from poison on her, and she feels the poison leave the rest of her body.

They arrive in Nostoc’s office. He tells them to close the doors.

Scanlan asks why they’ve been summoned. Keyleth asks again about Lady Kima. He reminds them that she’s in the mine. He offers them free range to his mines on the condition that they investigate the source of the creatures. He offers them 25,000 gold pieces and 250 gold per beast scalped returned to him.

They continue to discuss Lady Kima and Vox Machina’s past triumphs. They ask about the blood wine, and he begrudgingly agrees to give them a glass each. Vax offers to pour it. While Scanlan distracts Nostoc with his flute playing, Vax fills an empty water jug.

The party leaves the office, searching for Herris the freman. Scanlan sings to them as they drink, rest, and heal.

One of the guards leads them to a small building where Herris resides. When they arrive, a portly dwarf with a chinstrap beard opens the door. Vex greets him and asks about the beasts coming out of the mines. He tells them for weeks they’ve seen various monsters and stitched together goblins. He says he hasn’t heard about stitched together beasts and points out on a map where they have found the monsters.

They thank Herris and go on their way. They promise to come see him again. Grog throws rotted food from the bag of holding at him.

They make a detour to House Thunderbrand before heading to The Iron Hearth tavern.

Keyleth turns into a squirrel and hides in Vex’s pocket.

Vax attempts to walk up to House Thunderbrand, but blue arcane energy begins to spark around him. There is a blue flash, and he’s blown back in an electric shock.

Tiberius attempts to cast dispel magic on the runestone.

Tiberius introduces himself and the others. Lord Thunderbrand casts silence on him. Vax explains that they were sent to collect items to help them in the coming battle. Lord Thunderbrand angrily insists that they are a house of study and not a magic shop. He lifts the silence spell on Tiberius. The dragonborn goes on to say that he very much admires the House’s devotion to the arcane arts, which led to his initial inquiry.

Hearing their pleas, Lord Thunderbrand still refuses them. He argues that that there is not a dwarf among them. He says that they sell items through The Value of Valor. 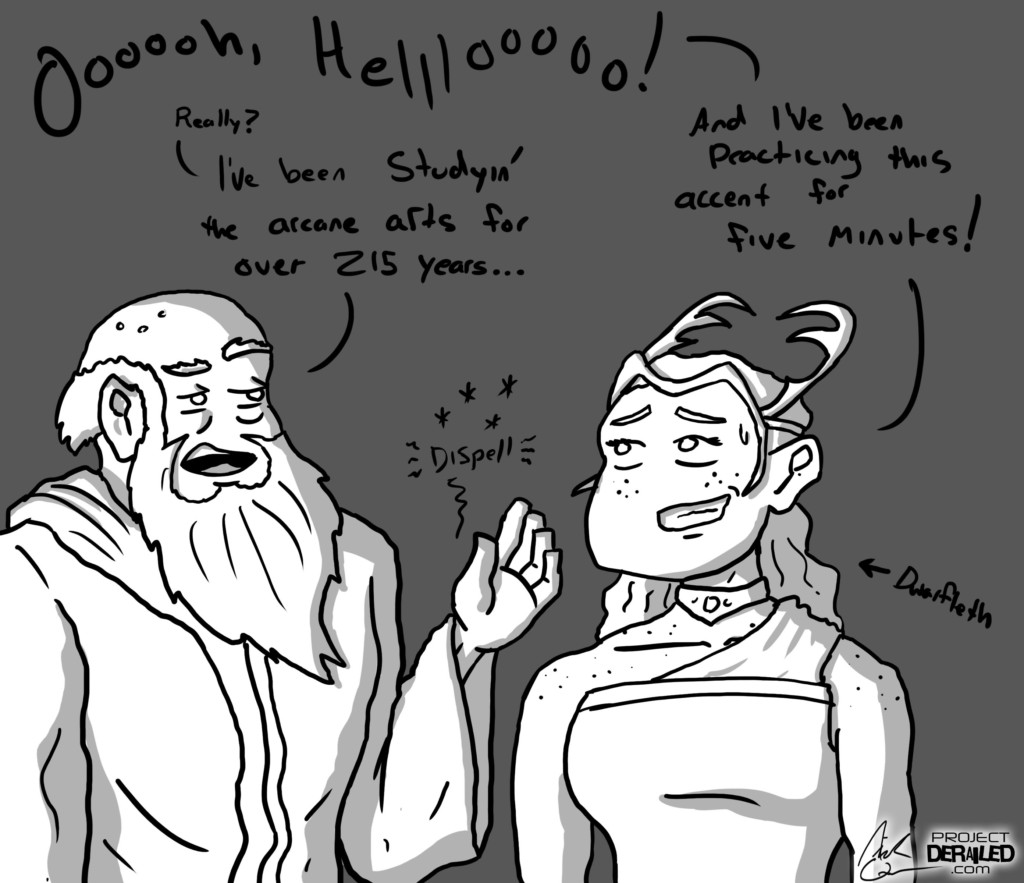 Lord Thunderbrand is not amused and changes her back into her half-elf self. Scanlan tries to pretend that they all thought Keyleth was a dwarf all along, and that she had been lying to them.

Vax steps in front of everyone.

He tells Lord Thunderbrand that though they may not be the best deceivers, they are strong fighters. He reminds the dwarf that Lord Greyspine himself sent them. Scanlan offers interesting artifacts from the mines. Thunderbrand says that if they find any, they’ll talk.

The party heads to The Value of Valor. A grey, elven building. An elf greets them. Grog inquires about superior healing potions. The elf lists the price as 1500 gold. Vex tries to haggle the price down. She offers arcane objects from the mines in exchange for a discount. Like Lord Thunderbrand, he tells them they will discuss a deal after they return from the mines.

Trying to bargin more, they offer dragon and basilisk parts. Vax offers a troll dick, but Grog informs him that they’ve already used theirs. The shopowner declines the offer.

They buy several potions and go along their way.

They go back to the tavern to rest for the evening.

The next day, they go back to the mines. The guards, acting upon orders from Greyspine, let them through.

When they enter the mines, they discover dwarf tracks along with two sets of drag marks that seem to be unrelated. They follow the trail.

They notice portions of the mine that have been caved in. They see some dwarven and goblin corpses from the attack yesterday.

Tiberius uses the light spell to light their way. A secondary mine cart leads deeper into the mine. They see a spiral staircase to their right. Dwarves collect bodies. Vex sees more tracks going farther down the tunnel. Following them, they see a freshly dug tunnel.

Grog yells his name into the tunnel. They notice the tracks from two of the bodies being dragged have no one dragging them.

Pushing forward, the tunnel winds into a descent. Four hours later, the tunnel finally widens and opens. They come across a cavern with a river running through it. The tracks stop at the river. Tiberius extinguishes his light, leaving them in darkness.

They hear a skittering noise, and two umber hulks drop from the ceiling.

Keyleth turns into a cave bear.

The umber hulks begin to attack. One hits Percy with its mandibles. The second goes for Grog, but Scanlan distracts it with cutting words. However, the reaction is not enough to stop every attack, and one of his claws slashes at Grog.

Percy pulls out his gun and takes a shot. Though he is not looking directly at the beast, he successfully hits. He goes to take a second shot, but the gun jams. He quickly tries to fix it.

Grog goes into a rage. He feels the influence of the umber hulk’s gaze pierce his eyes. The beast’s influence overtakes him. He turns to Tiberius and swings. However, he misses his dragonborn friend.

Tiberius cures Grog from his confusion. He magically creates a stone pillar, bringing him up above the battlefield.

Scanlan uses his magic to turn one of the umber hulks into a snail.

Keyleth, after seeing Grog get confused, takes the umber hulk by its throat and takes it into the river. The umber hulk strikes her several times and reverts back into her original form. She and the umber hulk are both underwater.

Vax picks up the snail umber hulk. He throws it over the waterfall. 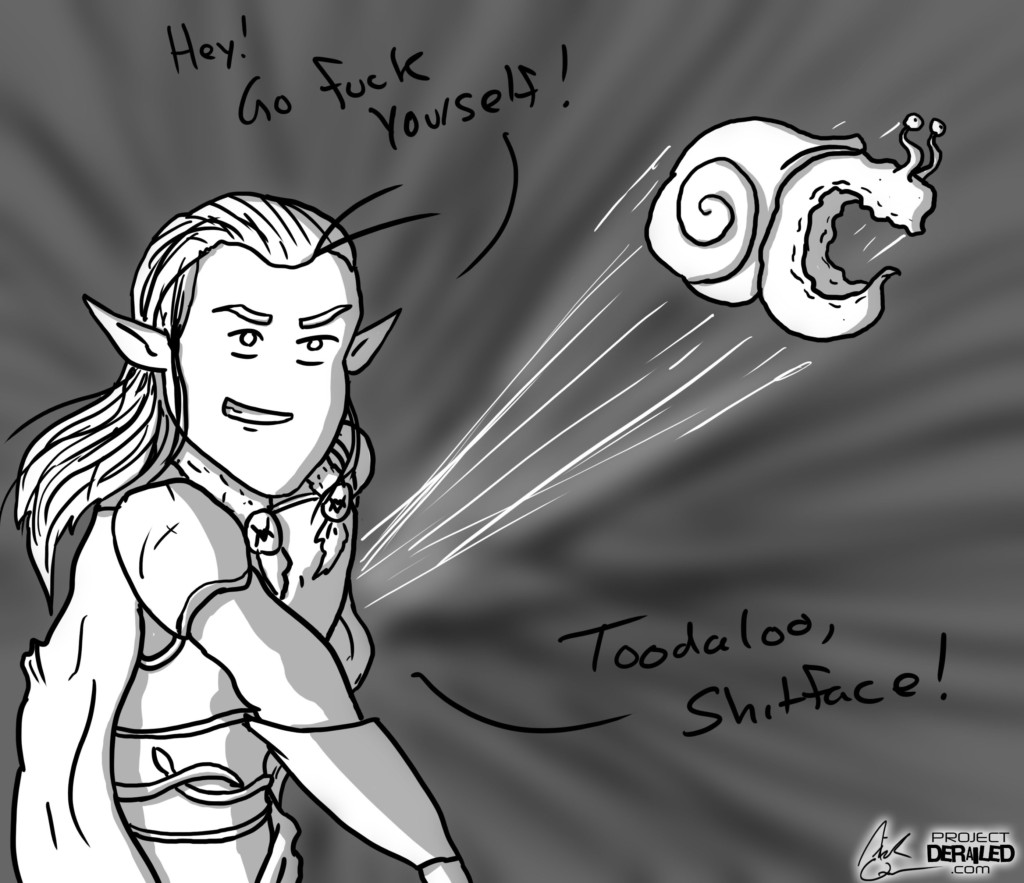 Grog leaps into the water and slashes at the submerged umber hulk. Their eyes meet as Grog swings his axe down, cleaving his forehead in half.

Vex helps Keyleth out of the water. The other umber hulk, bursting out of its snail form, burrows through the ground to reappear behind Vax.

Scanlan moves in front of Percy. He inspires the gunslinger and casts lightning bolt in the direction of the umber hulk. The bolt grounds itself and shocks the beast.

Percy shoots at the monster. He critically hits the creature. The umber hulk is badly damaged.

Keyleth casts call lightning. A storm magically forms, and she pulls down a single bolt of lightning.

The umber hulk hits Scanlan three times. As it tears into Scanlan, Vax stabs it in the abdomen. Vax rips the umber hulk open, and its innards spill onto the gnome bard. The umber hulk collapses on top of him, dead.

Grog rolls the dead umber hulk off of Scanlan. Keyleth heals him.

Grog, still raging, runs off towards a light in the distance. The others chase after him. They find a fire in the middle of a camp site. Grog slashes at the bedding. Three crossbow bolts fly at them out of the darkness. Two hit Grog.

They see three duergar and an unfamiliar beast: a large brain with a set of claws.

Scanlan casts stinking cloud. The rest move in closer to the deurgar.

The duergar are retching from the foul stench. Grog feels the brain reaching out into his mind. He falls unconscious as the creature drains his mind.

Tiberius fires glacial blast at the brain, freezing it. He shatters it, and pieces fly everywhere.

Scanlan tries to cast dispell magic on Grog, but he does not wake up.

They attack the two duergar, deciding to leave one for questioning. They battle, and one falls off the cliff to the cavern below. The other duergar remains incapacitated by the stench of the stinking cloud. Vax tries to capture them, but he is also overtaken by the smell.

Vex calls out to the remaining duergar to surrender. He drops his weapons, agreeing to her orders.

Fiona L.F. Kelly is a writer, editor, and podcaster. She has published numerous articles about all things gaming and pop culture on websites all across the internet, was also a writer for Trinity Continuum: Aberrant 2e, and has been published in books and magazines. She is an editor for the pop culture and media website GeekGals.co. In addition to her writing and editing, she has also been a guest and host on several podcasts. She hosts the Project Derailed podcast Big Streaming Pile, produces and performs on Fables Around the Table, and plays the githyanki pirate Rav’nys on Tales of the Voidfarer. Buy her a coffee: ko-fi.com/fionalfkelly
Previous Post (p) Crit or Miss Star Wars Month: Star Wars Saga Edition
Share
Next Post (n) Murder On The Orient Express: A Timely Classic