My recap of Episode 54 can be found here.

Oh man, what an epic episode! Lets jump in!

After rigorous planning, Vox Machina and the Herd of Storms set an elaborate trap for the Ancient Black Dragon Umbrasyl, member of the Chroma Conclave, who has claimed dominion over the city of Westruun.

The trap works, if only for a moment. Vax and Scanlan end up inside the beast with an immovable rod while the party attacks it from the outside. Umbrasyl eventually breaks free and begins flying off with Vax and Scanlan still inside and Grog, dangling from his Chain of Returning, in tow.

Umbrasyl flees toward Gatshadow and in a rush of wind, Grog suddenly finds himself dangling hundreds of feet above the Bramblewood.

Now very aware of the tiny beings inside of him, Umbrasyl attempts to regurgitate Vax and Scanlan, but is unable to dislodge them. Vax manages to maneuver his blades along the shaft of Vex’s arrow but is unable to widen the wound. Scanlan polymorphs into a snake and attempts to wriggle out the wound created by the immovable rod‘s “exit” but is not strong enough to push through.  Grog begins climbing the chain.

Meanwhile, back on the ground. Percy and Pike each jump onto the backs of the two giant eagles Vex had previously summoned and take off after the dragon. Vex follows on her broom of flying. Keyleth, in earth elemental form, begins activating the Gate Stone.

The stone has an activation time of one minute. 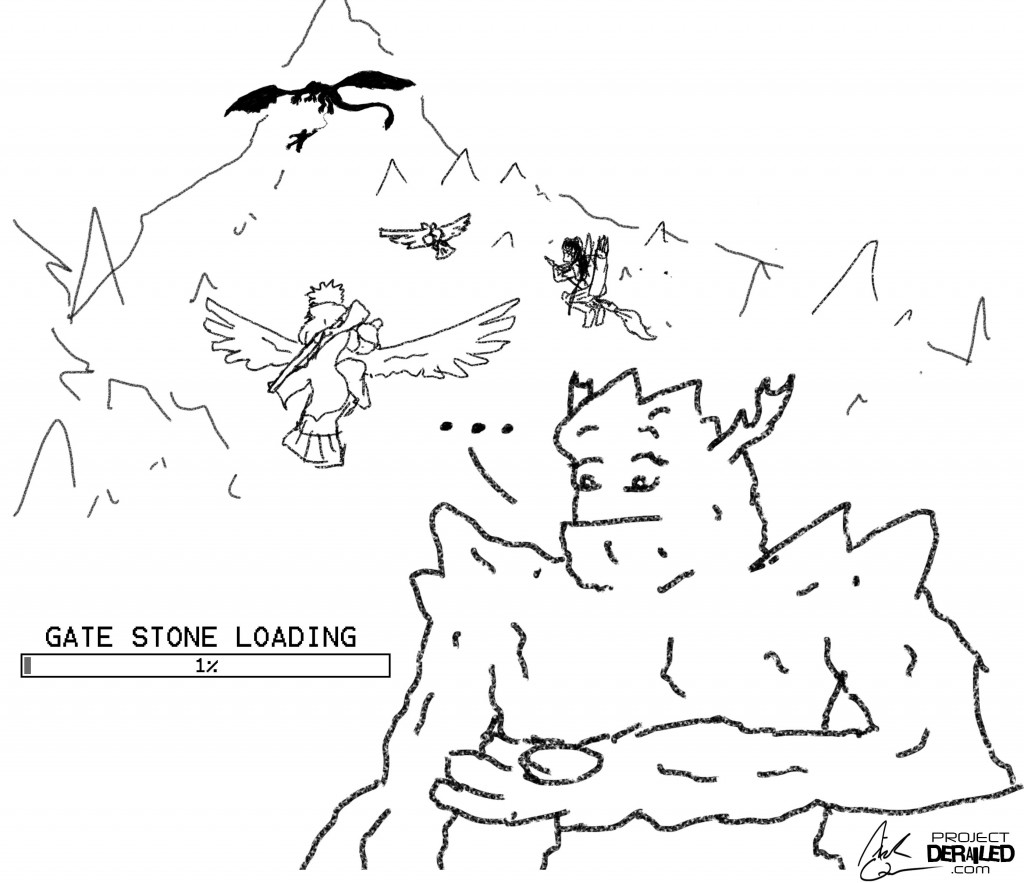 Umbrasyl spots Grog dangling beneath him and unloads his acidic breath weapon into Grogs face. Grog withstands the corrosion, not without significant scarring and burns all over his body, and continues climbing the chain. 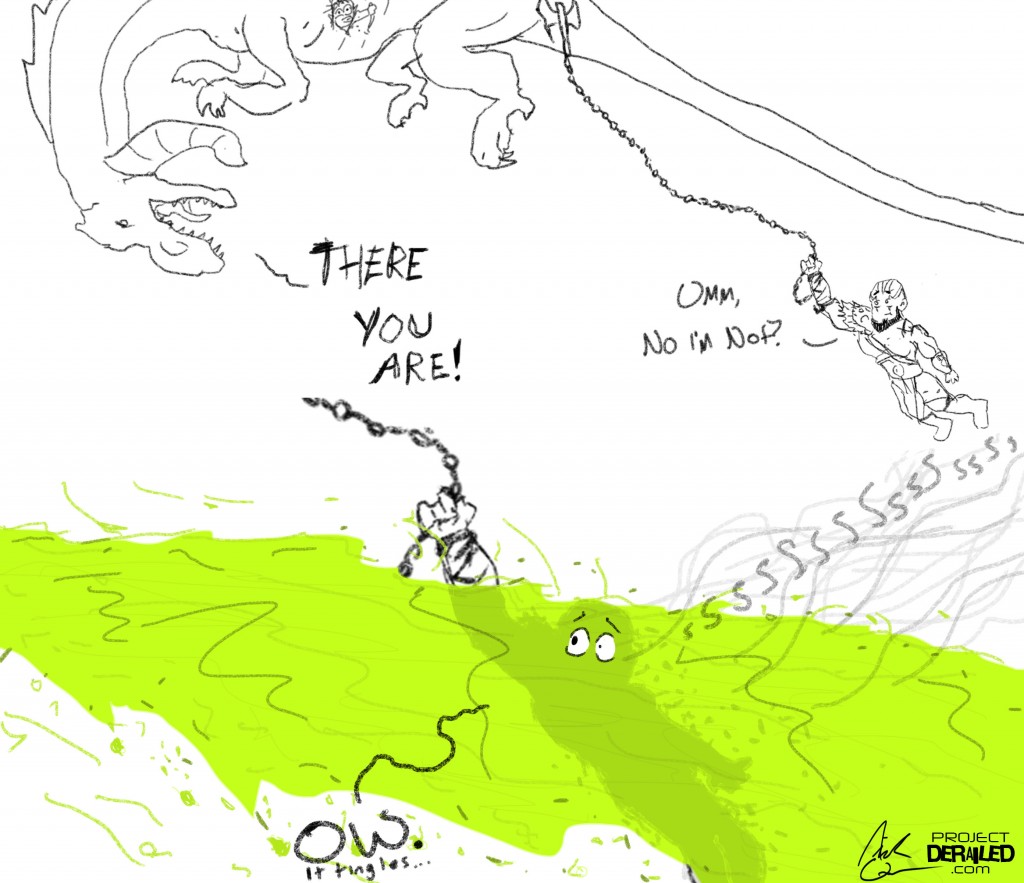 Grog gets to the dragon’s back but is unable to pry free his ax. Vax actually succeeds in beginning to cut his way out via the wound originally created by Vex’s arrow. He wriggles into the wound and manages to get his head and an arm out the other side.

Scanlan drops the snake form casts Bigby’s Hand. “I would like to fist the wound.”

The dragon recoils from the internal prodding. Grog loses his balance and tumbles back off the dragon, but luckily his chain of returning saves him, leaving him once again dangling.

Percy gets a shot off on the dragon from the back of his eagle, and Pike and Vex continue to pursue. They watch as Umbrasyl vanishes, casting invisibility on himself. Grog appears to be kiting along, dangling from nothing.

Meanwhile on the ground: 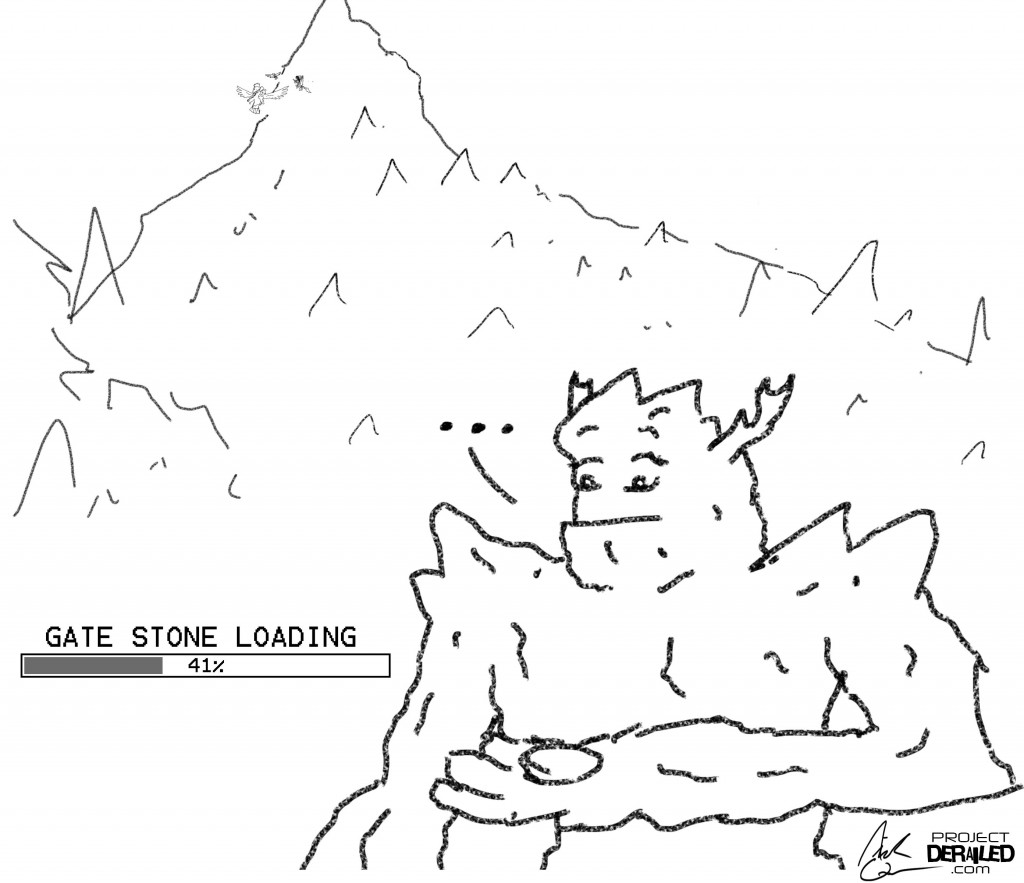 Scanlan has Bigby’s Hand punch its way out of the now much larger wound. He grabs onto the giant spectral hand and it pulls him through the wound as well, leaving him clinging to the floating hand in mid-air. He hits the dragon with lightning bolt as he watches it vanish and fly away.

Umbrasyl, now long over this mess, dips into a barrel roll, dislodging Grog’s ax and chain and ejecting Vax from his abdominal wound hundreds of feet in the air. Grog is flung into an upward arc while Vax is launched directly toward the earth. Midfall, Vax prays for help from the Raven queen, heals himself for 5 hit points (mostly for solace), revealing that he is now a paladin of the death goddess, and flings a dagger at Umbrasyl as a last-ditch act of defiance. Grog frantically pulls one of the several fancy cloaks out of the bag of holding and attempts to use it as a makeshift parachute, to little effect.

Scanlan can reach only one of them on Bigby’s Hand. 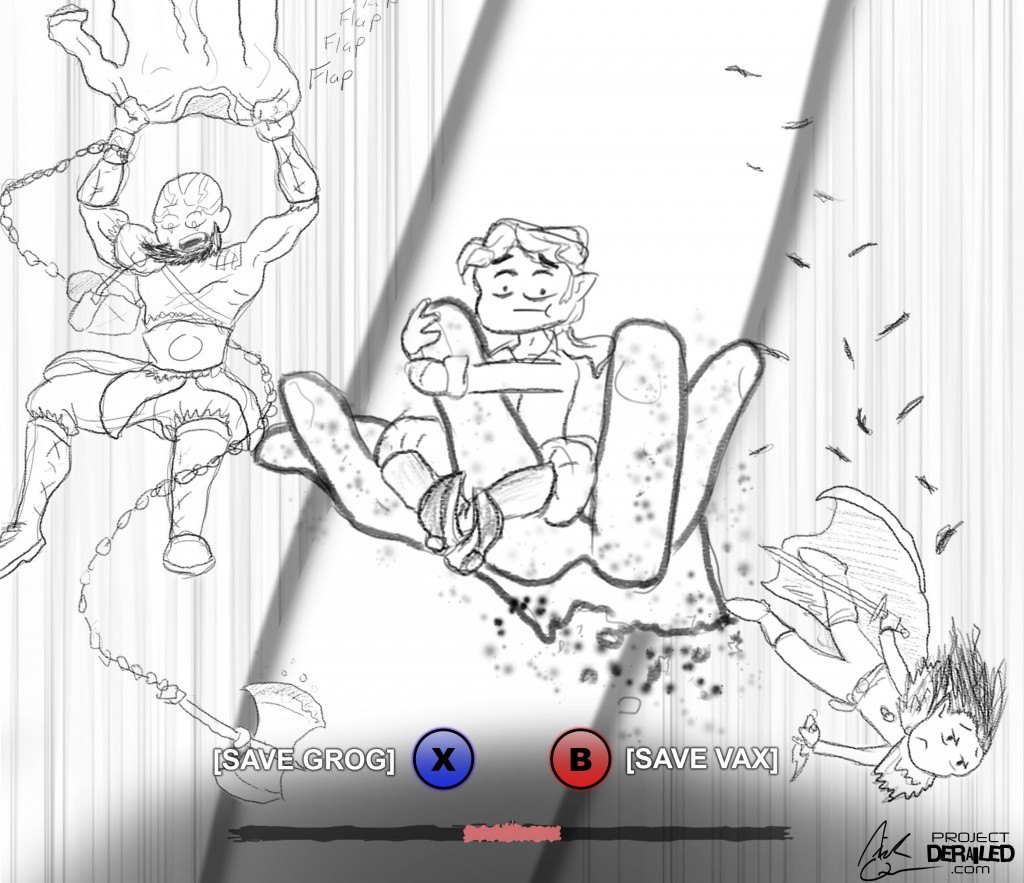 After an internal struggle, Scanlan shakes the indecision and chooses to catch Grog. 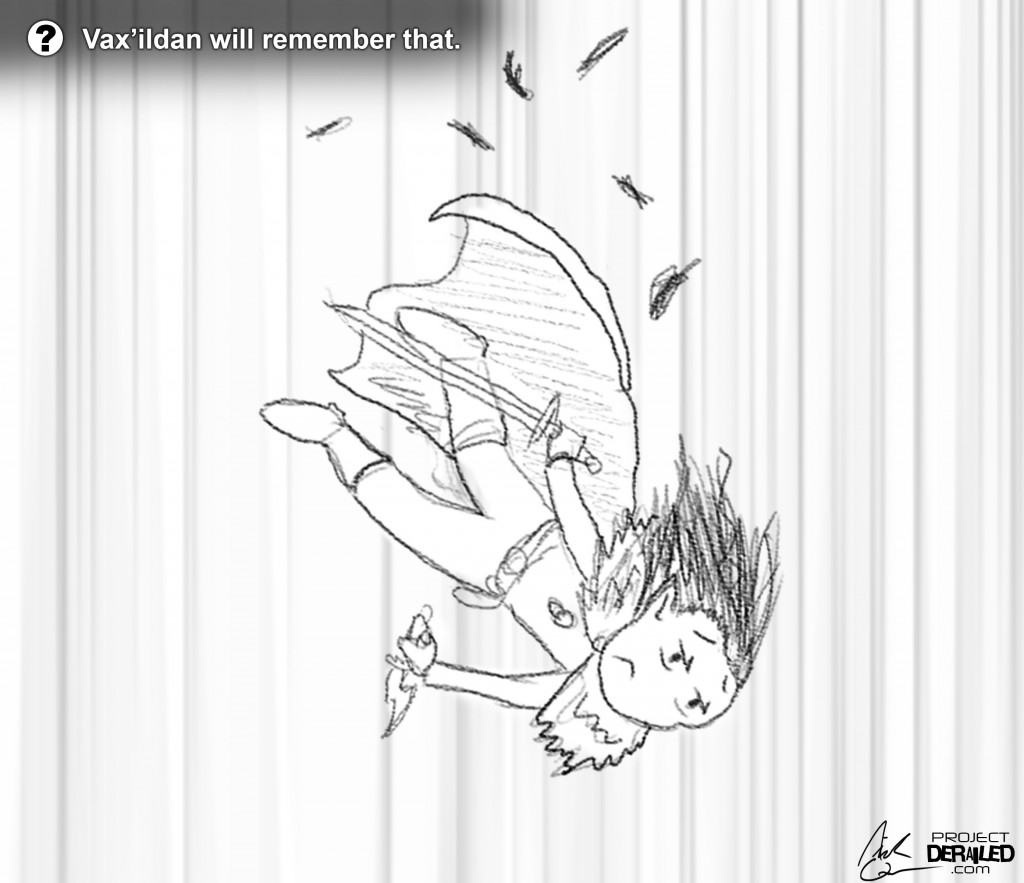 Vax continues to plummet. Scanlan, without warning, dismisses Bigby’s Hand and clings to Grog, simultaneously polymorphing him into a giant eagle. The barbarian springs feathers (and gets 1 point smarter) and instinctively takes flight,  Scanlan on his back. He pulls into a dive, managing to get on the level with Vax moments before impact. Using his luck, (which takes the form of the Raven Queen’s guidance in his ear) he blindly grabs onto Scanlan, nearly ripping the gnome off eagle-Grog’s back. The three level off safely.

At that point Earth-Keyleth’s Gate Stone finally activates and, as Scanlan had the other Gate Stone in his pocket, appears next to the trio mid-air… 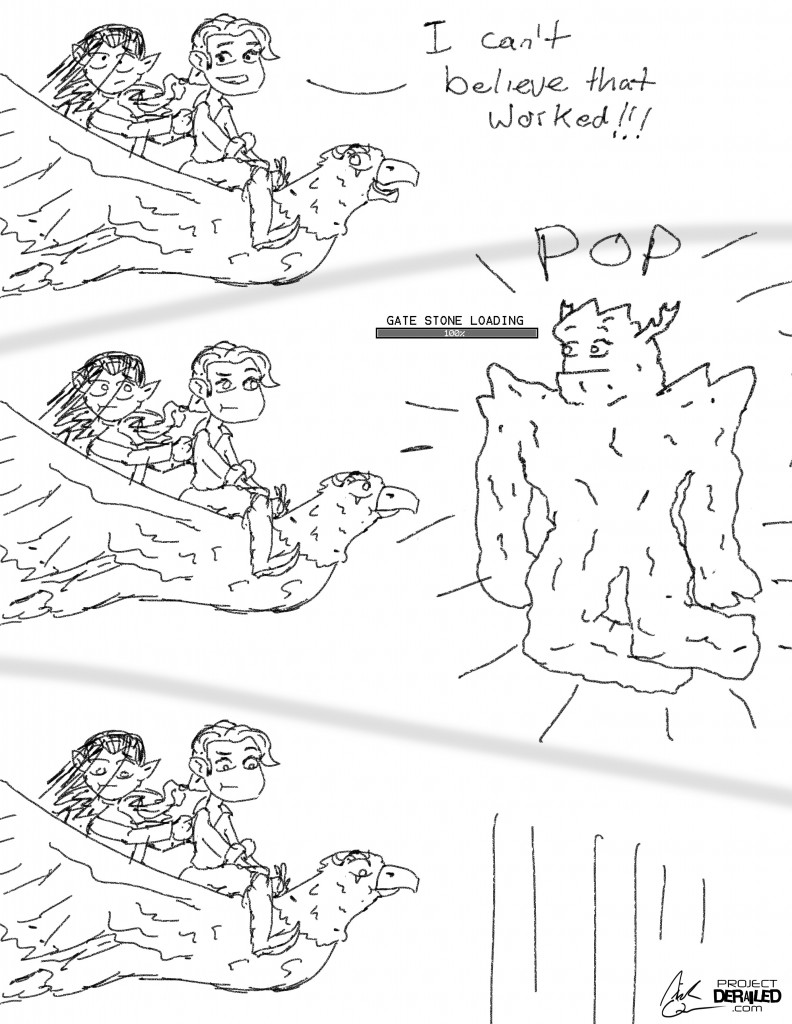 Earth-Keyleth plummets to the ground and (with a show of meteor-y epicness) impacts into the ground. The earth elemental form immediately dispells from the damage leaving normal Keyleth in the middle of the massive crater, relatively unharmed.

Umbrasyl invisibly flies away to his lair as Vox Machina regroups on the ground. As they lick their wounds, they are approached by an elderly, one-armed, one-eyed goliath woman, likely attracted by the large mushroom cloud of dust and brambles created by Keyleth. She introduces herself as Shale (played by guest, Chris Perkins!!!) and explains that she was with a scouting group from the herd but fell behind, sparing her from the death by dragon that came to the rest of them. She eagerly joins the group, explaining that she is old, and that if she is going to die, killing a dragon would be how she would want it to happen.

The group uses Vex’s giant eagles to shuttle themselves the rest of the way up Gatshadow, and they work their way around to the opening of the cavern. Vax discovers a pair of rocks embedded on either side of the tunnel and has Keyleth, Shale, and then Scanlan examine them. Upon identifying them to be enchanted with some “old magic” but not being able to discern more, the group has Keyleth stoneshape a tunnel around them and they pay them no more mind.

They reach the main chamber. Vax scouts ahead, sees nothing in the large, acid pool laden chamber, but hears a soft breathing from somewhere within. He regroups with the party and explains that he want to go in alone to attempt to sneak attack the dragon and has the party wait for his signal.

The half-elven rogue stealthily hugs the wall and makes his way around the chamber. His efforts at stealth are foiled, though, when he manages to run headlong into the still invisible Umbrasyl.  Vax instinctively strikes out, but not before the dragon attacks with its claws and jaws, thankfully missing thanks to Vax’s cloak of displacement.

Vax whispers the emergency code word “Jenga” into his magical earpiece and waits for his backup before attacking further.

Percy shoots blindly into the chamber but misses the unseen dragon. Vex nocks an arrow to attempt the same, and with Pike’s War God’s Blessing to guide the shot, her arrow strikes true. She also releases her bear, Trinket, from his magic locket and he lumbers forward to aid Vax in melee.

The ancient and very angry dragon retaliates by summoning a swarm of insects. “You dare soil my home after what you have done below? I will watch you dissolve before I suck up your liquid forms!” He punctuates the outburst by showing Keyleth, Percy, Pike Vex, and Scanlan his acid breath. Scanlan uses cutting words (“YOUR LOWER INTESTINE SMELLS LIKE SHIT!”) which succeeds but helps only marginally.

With Trinket now up on the dragon as well, Vax strikes out, slashing at the dragon. Keyleth casts Faerie Fire to make Umbrasyl visible again, but the dragon shakes off the glittery cloud (spending his last legendary resistance). Scanlan casts Stinking Cloud, which hinders the dragon for a round as he chokes on Scanlan’s fart.

The dragon’s invisibility fades naturally. “Great, now we can watch him kill us!”

Shale finally shambles up to the dragon and begins whacking it with her quarterstaff. Pike lands a critical hit with Guiding Bolt and sends the streak of divine energy right up the dragons butt. Keyleth casts another Faerie Fire then transforms into her water elemental form. Grog steps up in a frenzied rage, critting on the first of his three attacks, landing the second, and whiffing on the third. Scanlan conjures another Bigby’s Hand and has it “finger” the already brutalized abdominal wound while he inspires Shale by flirting with the elderly warrior. 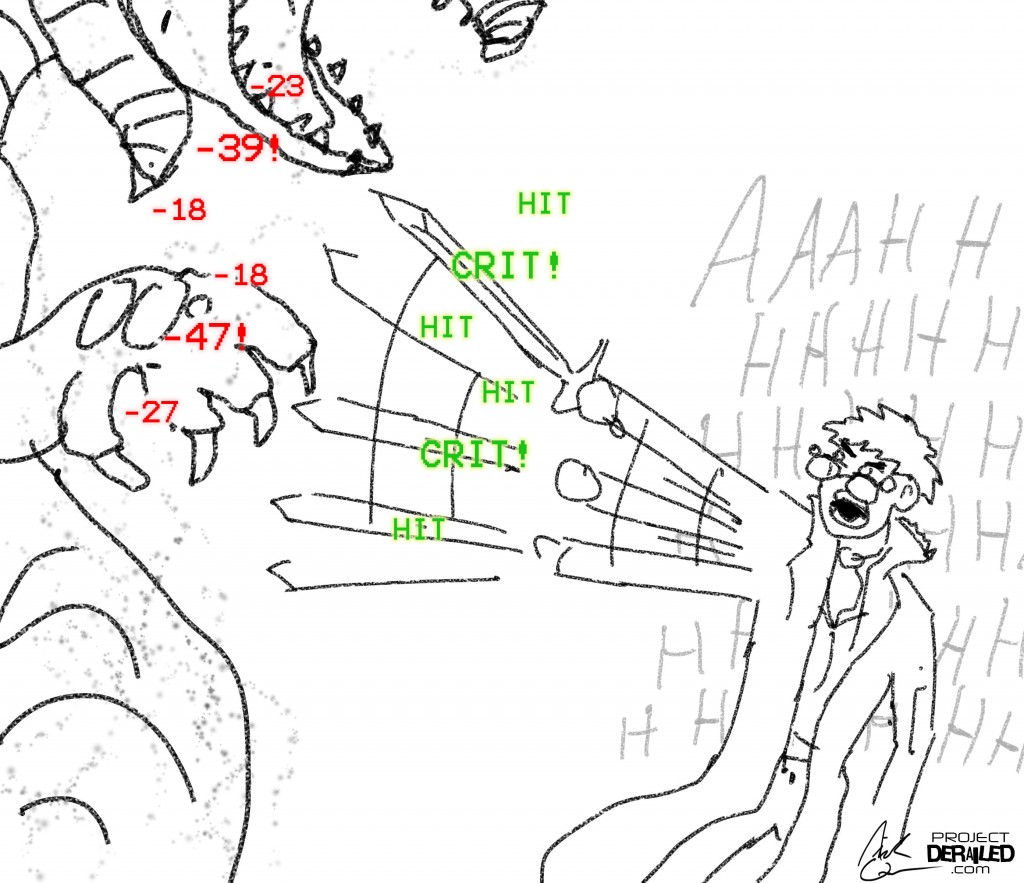 After a few rounds of combat, Umbrasyl taking damage from every angle, shrouding himself in a cloud of magical darkness, and another volly of acid breath, it attempts to step away from Grog, who uses his new retaliation barbarian ability to land the killing blow, driving his ax into the black dragons jaws repeatedly as it crumples to a heap on the cavern floor.

The party heals, harvests some bits from the dragon, and collects some of Umbrasyl’s treasure hoard to redistribute to the people of Westruun (much to Vex’s displeasure). They say their goodbyes to Shale, who regroups with Zanror and what remains of the herd. 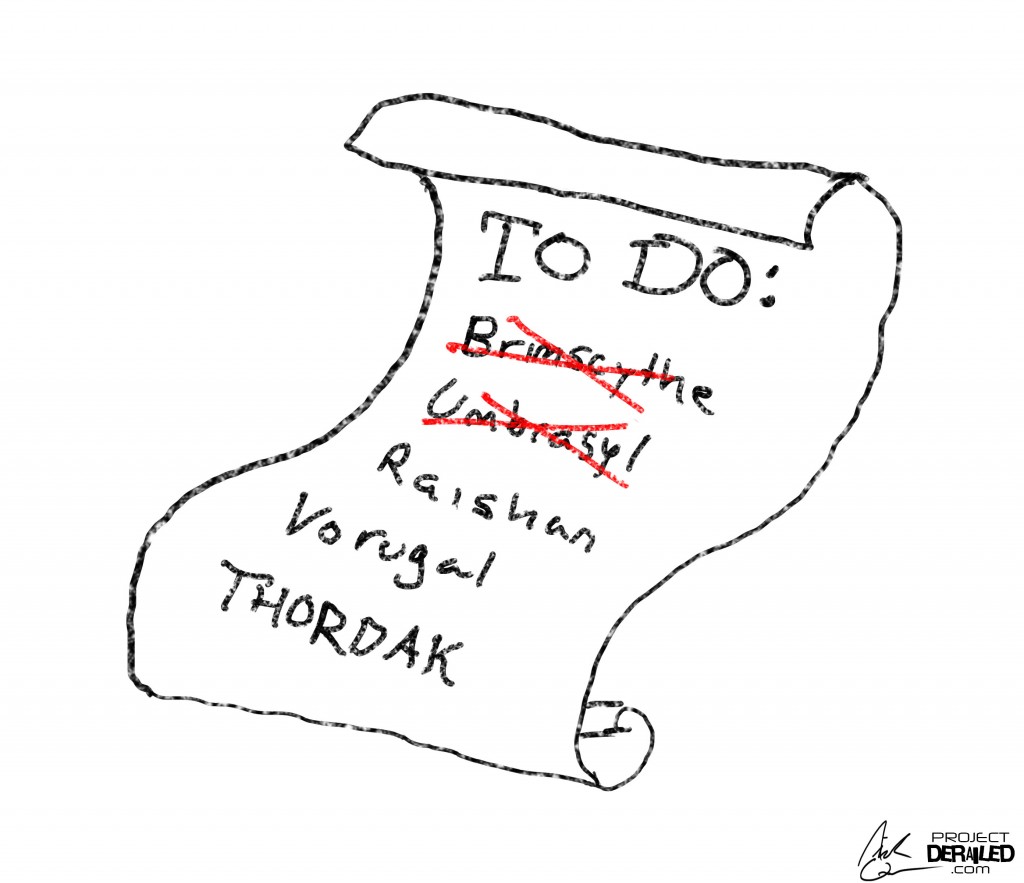 Thanks for all the complements and feedback on my first recap on Reddit and Twitter!  Remember to tune into Critical Role Thursdays at 7pm Pacific on Geek and Sundry’s Twitch Channel.

Nick is a social media marketing professional and content creator by trade but also dabbles in everything from graphic design, photography, illustration, videography & video editing, animation, and podcasting. He is the Co-Creative Head at Derailed Medial LLC, the creator and Dungeon Master of the ENNIE-nominated podcast Tales of the Voidfarer and cast member on Cape Chronicles and Fables Around the Table.
Previous Post (p) Overwatch Gif Roundup
Share
Next Post (n) Review: X-Men Apocalypse