Thar be spoilers! Check out the full episode here at GeekandSundry.com.

If you follow me on Twitter, you will know that I am a bit of a fan of Geek and Sundry’s Critical Role.

And with the break last week I figure everyone can use a recap of the awesome episode that lead up to that crushing cliffhanger (complete with doodles!).

The Road So Far

The party, Vox Machina, has been traveling to gain allies and collect the fabled Vestiges of Divergence. These magical artifacts of incredible power will help them defeat Thordak, the Cinder King, leader of the Chroma Conclave, the alliance of four ancient chromatic dragons that destroyed the party’s home of Emon as well as many other cities on the continent.

The party had returned to Westruun, which had fallen to the conclave. The black dragon Umbrasyl had taken roost in the mountain Gatshadow near the city. The Herd of Storms, Grog’s former barbarian tribe, led by the villainous Kevdak, Grog’s uncle, had moved into the city and pledged servitude to the black dragon.

Grog challenged Kevdak, and after a bloody battle Grog dealt the final blow to his uncle, and convinced the herd to stand down at their leader’s defeat. Taking the Titan Stone Gauntlets, one of the Vestiges they had been looking for, off of Kevdak, Grog appoints Kevdak’s son, Zandror, leader of the herd. Zanror enthusiastically declares that he shall lead the herd to victory in slaying Umbrasyl the very next day…a time table that doesn’t sit well with the party.

They eventually talk him out of the hasty attack plan, convincing him to give them one more day to further plan and make preparations, in hopes of ambushing the dragon next time it comes down from Gatshadow to accept tribute.

The party splits up to begin several preparations for the upcoming battle with the ancient dragon.

Vax’ildan pulls Scanlan aside and proposes a dangerous plan. The gnome will cast Dimension Door to teleport INSIDE the dragon and activate an Immovable Rod. Scanlan is all for this “as a plan B” and proceeds to get a dragon anatomy lesson from the ranger Vex’ahlia, whose favored enemy is dragons. Neither Vax or Scanlan reveal their plan. 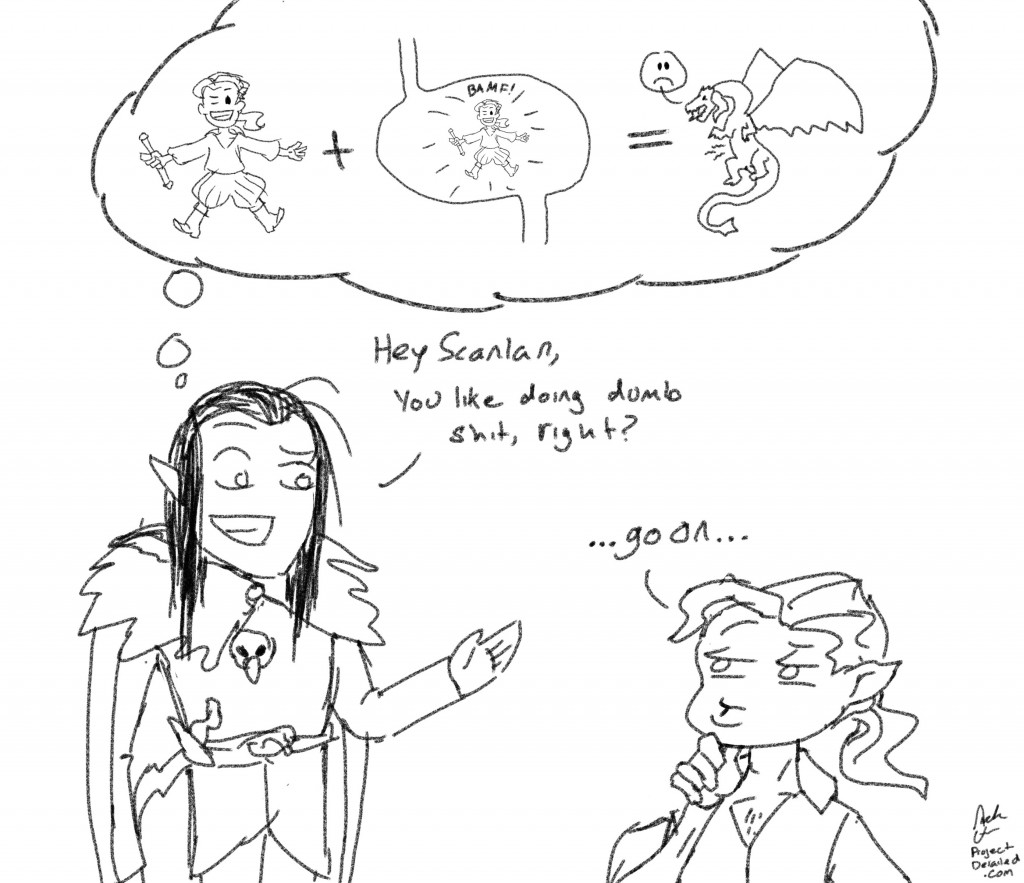 Meanwhile, Percy is canvassing the town for materials and local blacksmiths to aid him in creating a massive spring-loaded trap to restrain the dragon when it lands. He spends the entirety of the day planning, instructing his help, and tinkering away at his elaborate contraption. 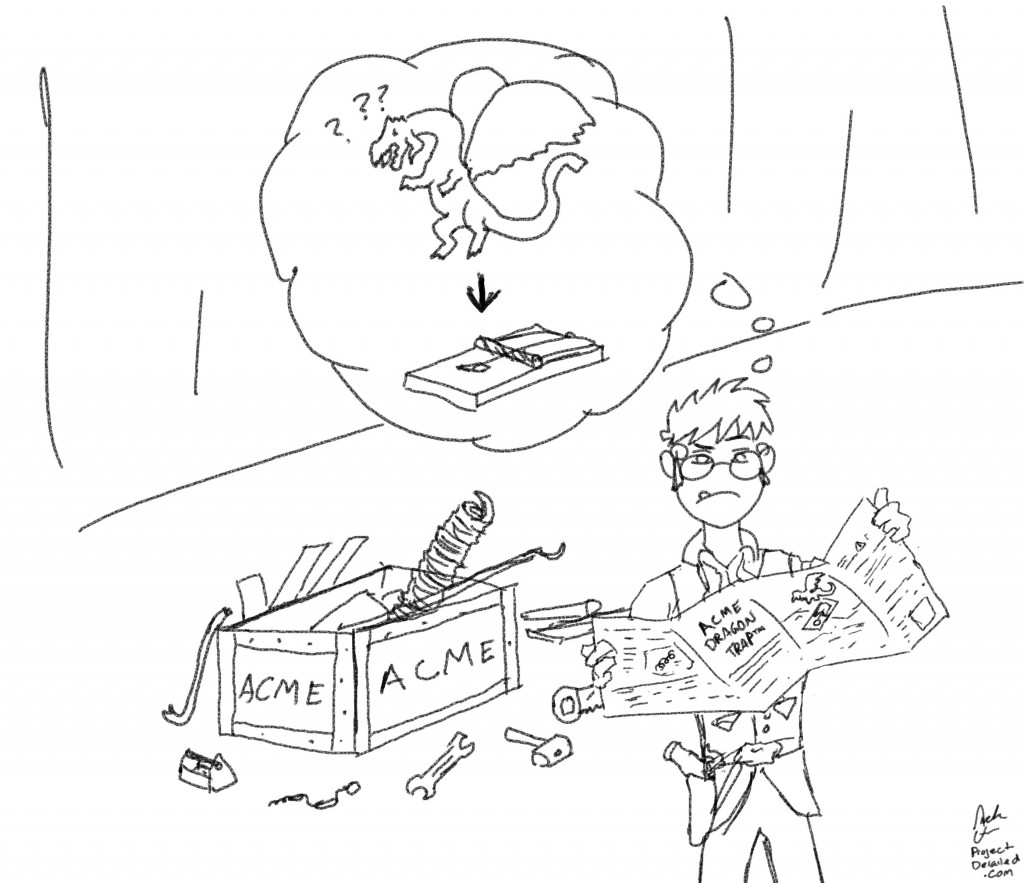 Vex and Keyleth go to talk to Zanror about their plan of attack. They propose hiding the entire herd in shallow trenches, created by druid Keyleth just below the surface of the ground, so that they can spring out and throw chains over the dragon to keep it grounded. Zanror is apprehensive as his original plan was to march the herd up Gatshadow to attack the dragon in its lair. Keyleth spends several spell slots simply  demonstrating her magic abilities to the goliath chief. The duo eventually convince Zanror to agree to this plan. 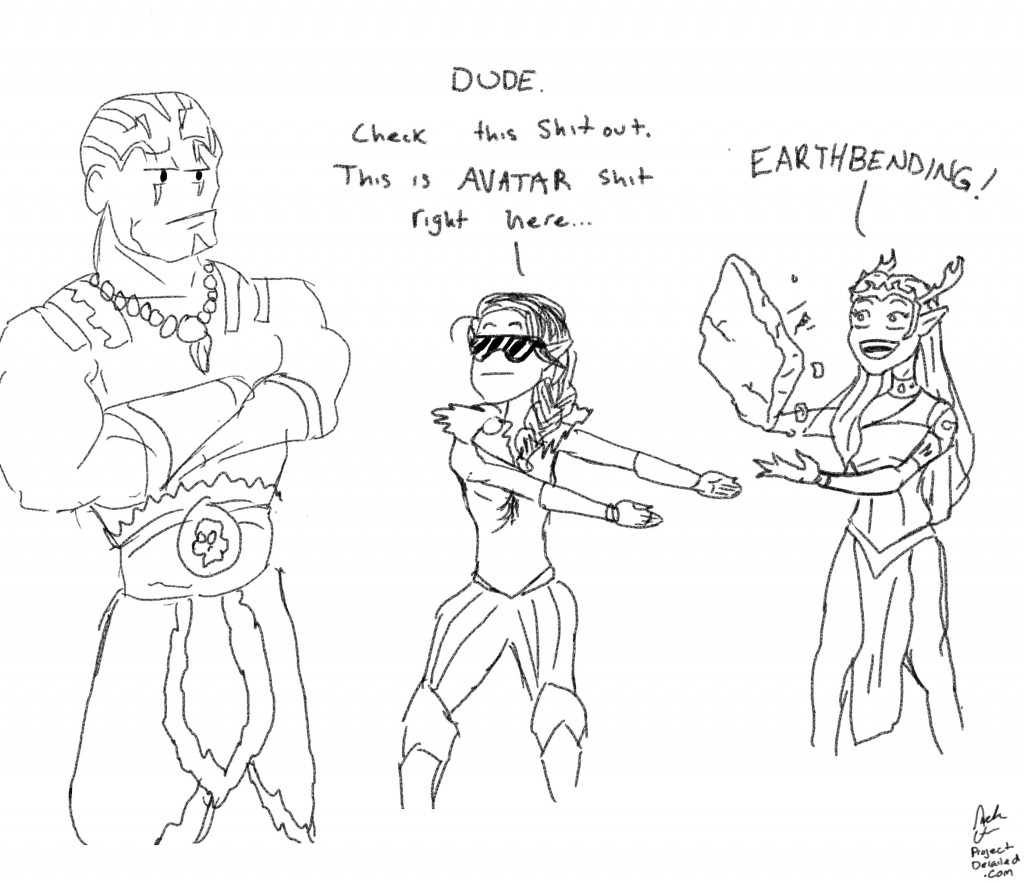 Grog heads over to the prison the herd has been using to keep its prisoners. He finds the place abandoned, with many prisoners starved to death in the cells. Grog finds four survivors, feeds them some rations and then searches for keys, finding them on a very dead guard (kicked just in case). After an incredibly elaborate process of determining trustworthiness, he releases the prisoners. 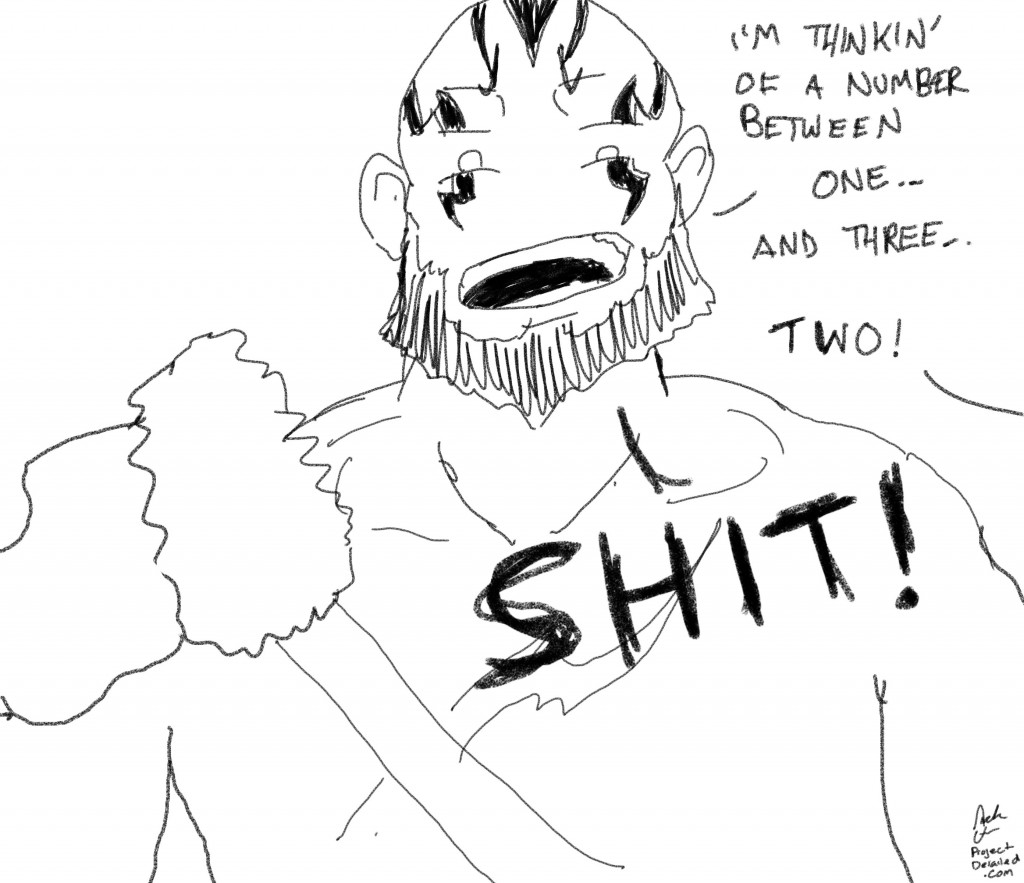 The party completes their preparations and Keyleth summons a Hero’s Feast to prepare the party for the upcoming battle the next day.

The next day they set the trap. They attach large chains to their newly acquired remote-controlled (and mustachioed) stone golem, Fassbender, and the goliath herd gets into position in the underground trenches created by Keyleth.

Pike prays to Sarenrae for a Divine Intervention to aid in the battle but there is no answer. 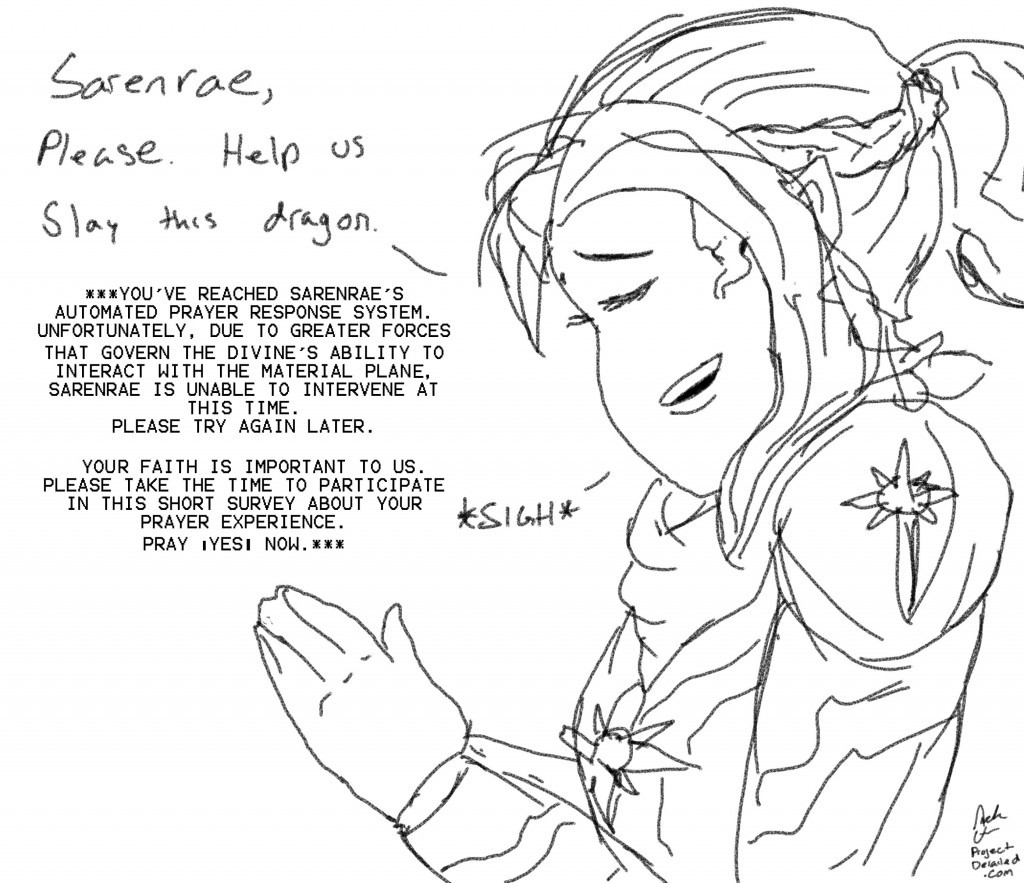 The trap is set, and Vox Machina and the 25 herd members are in position. Massive wing beats precede Umbrasyl’s arrival. The dragon lands, the trap is sprung and the herd breaks through the ground and secure their chains on the angry dragon.

Scanlan BAMFs with Vax (who had taken a shrinking potion to make him Scanlan-sized) inside the dragon, making an INT check for targeting. He finds himself inside the dragons stomach, Vax was not so lucky and ended up sandwiched between muscle and sinew in the dragons abdomen. 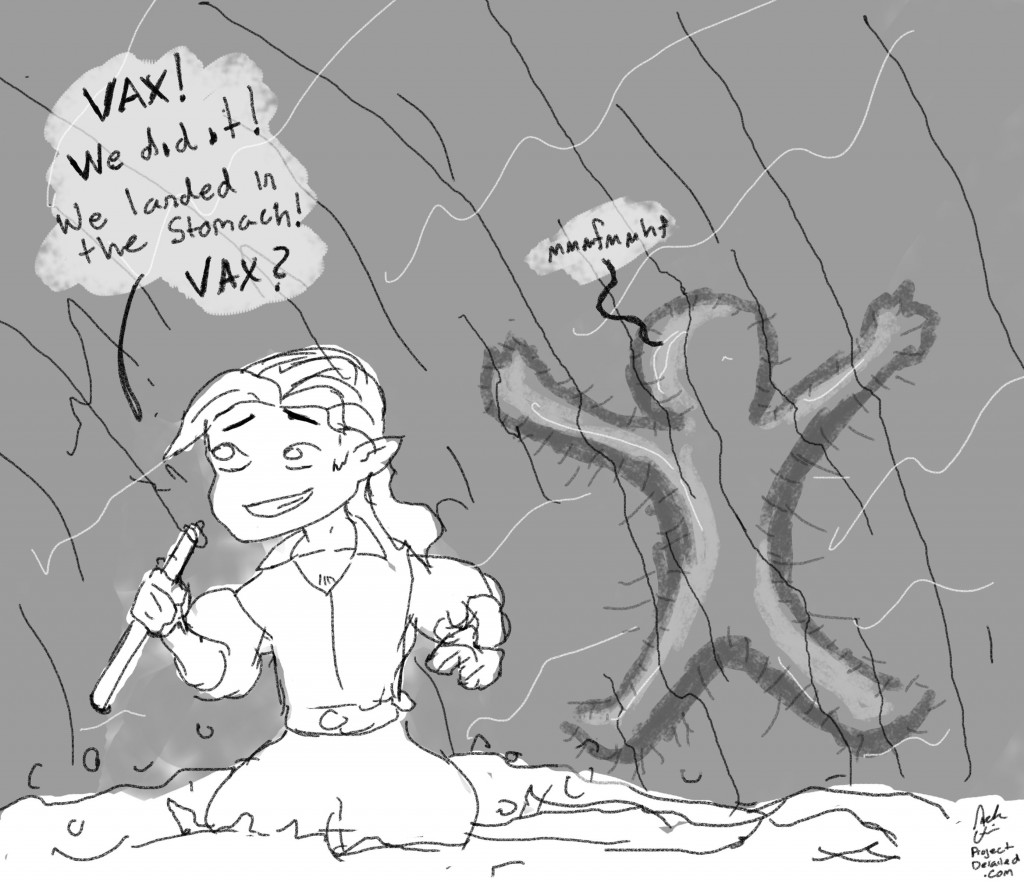 The dragon breaks free of its bonds and begins flying into the air. It blasts its acidic breath weapon, taking out a good portion of the herd.

The dragon eventually forces itself to move, rupturing the immovable rod from its body, leaving the magic item hanging in space presumably covered in dragon bits, taking a significant chunk of damage.

Damaged and embarrassed, Umbrasyl begins flying back to its lair at Gatshadow. Grog flings his axe into the dragons hide and hangs on to his chain of returning, dangling below the beast as it flys away. This leaves Pike, Percy, Keyleth, Vex, and Zanror and the remnants of the herd behind. 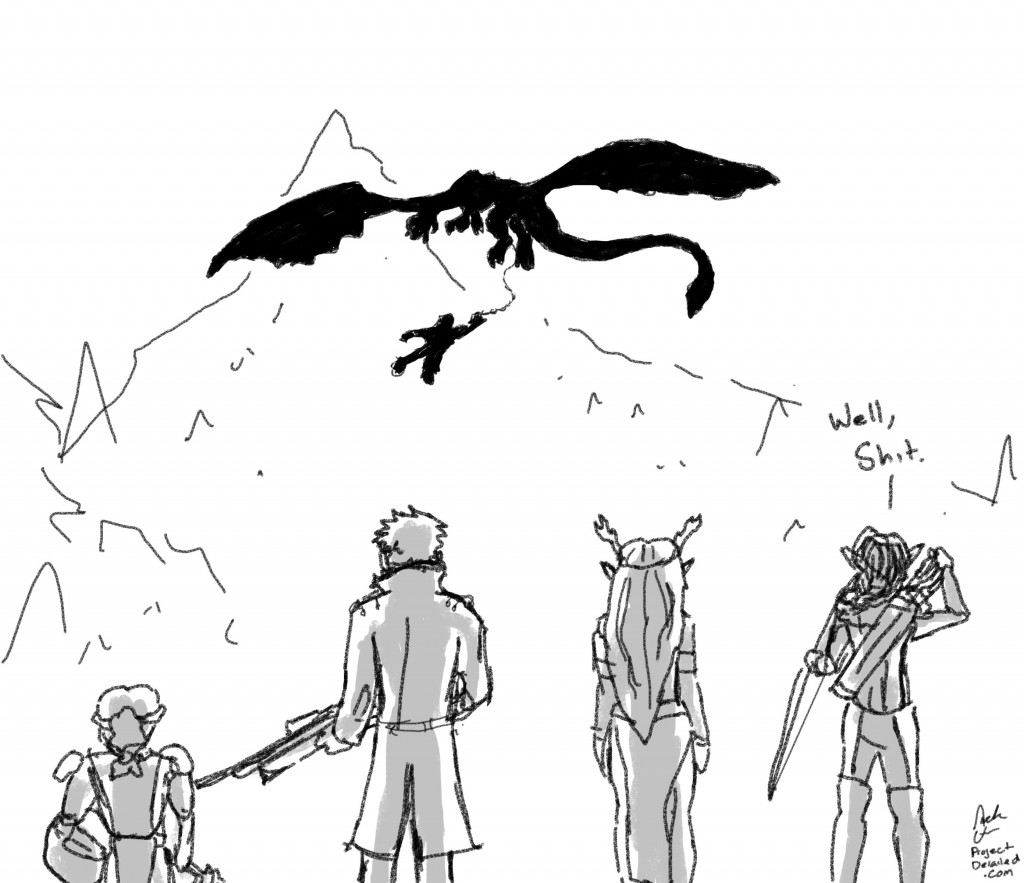 Well, I hope you enjoyed this recap and doodles! I intend to start doing this every week! Follow me on Twitter for my Critical Role tweets and other shenanigans and be sure to tune into Critical Role Thursdays at 7pm Pacific on Geek and Sundry’s Twitch Channel.

Nick is a social media marketing professional and content creator by trade but also dabbles in everything from graphic design, photography, illustration, videography & video editing, animation, and podcasting. He is the Co-Creative Head at Derailed Medial LLC, the creator and Dungeon Master of the ENNIE-nominated podcast Tales of the Voidfarer and cast member on Cape Chronicles and Fables Around the Table.
Previous Post (p) Rethinking firearms in D&D
Share
Next Post (n) First Pictures of Harry Potter and the Cursed Child