The group found that three of their members were taken during the night. While searching for their friends, they met Keg, a former slaver herself. They traveled to Shady Creek Run, pursuing the trail of The Iron Shepherds. They find the Iron Shepherd’s stronghold and take out some of the guards. Along the way, Nila finds her family and escaped. The rest of the group continues to work their way through the stronghold.

Keg stomps her way up the stairs, magically hasted by Caleb. She tries, and fails, to be stealthy. The spell fades as she reaches the top of the stairs.

Caleb sends Frumpkin, disguised as a spider, into each of the rooms. Caleb spots two heading towards Nott and the others. He sends her a message to warn them.

Upstairs, Caleb uses his scroll to go invisible. Keg panics, no longer seeing him, but she still pushes onward.

Back downstairs, Beau and Caduceus grab Nott and pretend to apprehend her for questioning. However, the guards see through their disguises and realize that they’ve been infiltrated.

Beau immediately jumps into action, slamming the guard’s nearest to her head into a wall until he passes out. The other guard turns and runs. Caduceus manages to kill him as Keg runs in to stop the guard from escaping.

Caleb goes up and whispers to the others that he’s invisible. He tells Nott that he thinks he should go first this time and moves forward. Nott, Beau, and Caduceus follow him. Keg, thinking about her failed stealth attempts earlier, hangs back. However, Caduceus’s armor scraps against the wall, alerting Ruzza and Protto to their presence.

A jet black hummingbird flies past them and back into the shadows.

Caleb invisibly sneaks into the room and sits down. Inside the cage, he sees Shakäste calmly unlock the chains binding him.

Keg, getting impatient, sneaks forward. She accidentally slams into the other three. Ruzza and Protto quickly begin to retreat.

Shakäste, free from his chains, summons his spiritual weapon: a large statue of Nefertiti. However, the attack misses.

Nott runs into the room and bumps into the invisible Caleb.

Caleb looks in the other cage and sees a dwarf male hugging and protect a human child. Both look scared, but healthy. Caleb whispers to them to stay safe and wait out the battle.

Protto pulls a lever, and portcullis slams in each doorway, splitting the party.

Beau tries to use brute force to lift the portcullis, but she’s unable to do it on her own. Keg tries to pull the bars apart, but she quickly realizes it’ll be easier to lift it up from the bottom.

Shakäste tries to slam Nefertiti down the hallway, but she doesn’t manage to hit anyone. He tries instead to use sacred flame, but that attack misses as well.

Keg, summons her strength and lifts the portcullis from the bottom. The others slide in underneath. As they make their way towards the hallway with Ruzza and Protto, the two run away further into the Sour Nest.

Caleb asks Nott to go forward and check for traps.

Shakäste goes to check on the the dwarf and human child still trapped in the cage. He pulls the gags out of their mouths. He explains that they are friends and will get them out.

Beau tries to feed him a goodberry. Nott screams at him until, crying, he agrees to eat it. Nott uses mage hand to unbind them.

Keg smashes into the door blocking them from Ruzza and Protto. She hears the voice of Lorenzo ring out around her. He asks what she’s doing in his domain and threatens to keep them all as his pets. Keg uses the rage from his words to finally break through the door.

Inside the room, they see a brazier. Beau walks up to investigate and a cone of flame jumps out at her. As the flames continue to come at them, Keg jumps into the room and tries to break it as well. Caleb tries to warn them that it is activated by proximity, and they duck down the stairs, avoiding the next bout of flames. Caduceus uses dispel magic to stop the flames.

They all go down the stairs after Beau and Keg.

Shakäste sends Anastasia down into the chamber below. He sees two furnaces on either side of the chamber. The chamber is unnaturally hot and smells like coal and burnt flesh. There are torture implements that have been clearly put into the furnace to burn its victims. They see a table where the victims are likely tortured. In the back of the chamber are two cages.

Shakäste calls the Duchess back. The group plans their attack.

When they enter the room, Ruzza and Protto begin to attack them. The party fights them, and they both fall dead.

Then, during the fight, Lorenzo finally reveals himself. However, he does not take his usual form. Instead, he appears in his true form: an oni. 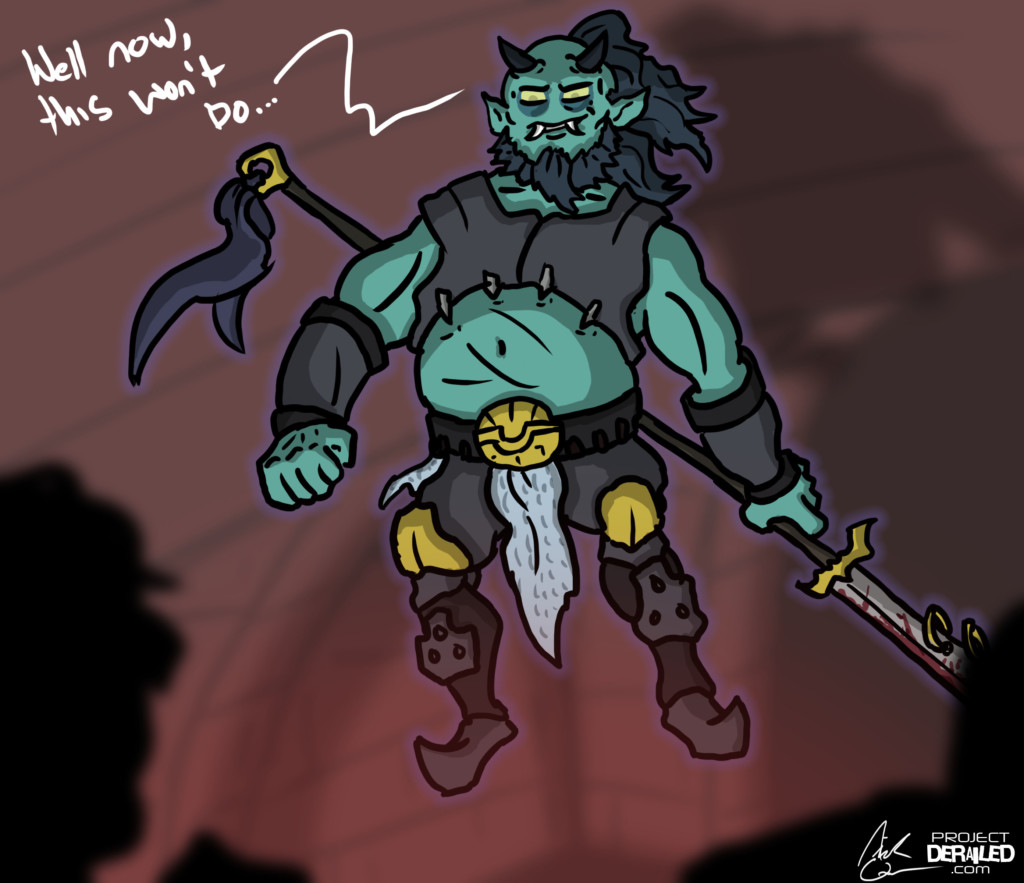 The group fought valiantly against Lorenzo. They each fought for their own reasons: Mollymauk, Fjord, Jester, Yasha, Keg. However, they were each greatly injured as well, and Caleb in particular took a great deal of hits. Beau managed to land a stunning strike, turning the tide of the battle.

As Keg and Lorenzo were locked in battle, Caleb comes up from behind Lorenzo and unleashes a firebolt.

Caleb: “You shouldn’t have killed my cat.”

Lorenzo slowly burns as he cries out and falls to the ground, dead.

The others quickly go over to check on the others in the cells. In one is Jester and Fjord. Yasha is in the other. The group gathers their unconscious friends, and heads back toward Shady Creek Run.

Keg tells the others that she isn’t sure what she’s going to fill her time with, if not revenge. Beau suggests spending the night together, which Keg accepts.

The group goes to sleep, ready to see what the next day will bring.

Fiona L.F. Kelly is a writer, editor, and podcaster. She has published numerous articles about all things gaming and pop culture on websites all across the internet, was also a writer for Trinity Continuum: Aberrant 2e, and has been published in books and magazines. She is an editor for the pop culture and media website GeekGals.co. In addition to her writing and editing, she has also been a guest and host on several podcasts. She hosts the Project Derailed podcast Big Streaming Pile, produces and performs on Fables Around the Table, and plays the githyanki pirate Rav’nys on Tales of the Voidfarer. Buy her a coffee: ko-fi.com/fionalfkelly
Previous Post (p) Critical Role Recap: C2E27 - "Converging Fury"
Share
Next Post (n) Clanbook Retrospective: Nosferatu