The Mighty Nein explore the watery passages in The Gentleman’s safehouse.

The party traveled through the Labenda swamp, finding allies in Kiri and Cali. In the swamp, they managed to find the safehouse. They fought merfolk in the safehouse’s subterranean chamber, and Fjord explored the water from which they emerged to find more waiting. Cali, given the item she needed to complete her quest, said her goodbyes.

The party agrees they need to rest. Caleb puts his silver thread around the tunnel through which Fjord swam.

They climb up the rope and make their camp near the tree outside.

Jester begins to teach Kiri what she should say in any given situation.

Caleb examines the dodecahedron. He’s unsure of the source of the magic. The form has been shaped from something more raw.

Beau asks Fjord for advice on apologies. He tells her to be genuine and admit fault. He tells her it takes a big person to admit when they’ve done wrong. He advises that she not use her practiced smile in this instance.

During the night, Caleb is woken up by the disturbance of the silver thread. Jester and Nott, who are on watch, wake up everyone except Kiri.

Frumpkin drops down the tunnel to see what has happened. Frumpkin reaches the bottom right as the merrow discover the corpses and aftermath from the previous battle. One of the merrows spots Frumpkin and throws his trident at the cat. Caleb quickly snaps Frumpkin out of the darkness and back to the group up top.

They quickly devise a plan. In their whispering, they wake up Kiri, who, in her anger for being woken up, recalls Jester’s lesson.

They prepare to attack if anyone comes up from below. After a few minutes, a merrow sentinel emerges from the passageway. The group quickly kills it and pulls the body up to the surface.

Frumpkin goes back down the tunnel to scout out the situation. Yasha follows. She hides the bodies.

Back on the surface, as they take watch together, Yasha and Caleb discuss ways he could improve his conversation skills with the group. She suggests being more social and washing more. He adds that no one pays attention to beggars, so he stays purposefully scruffy. He says that he misses shaving. Yasha offers to use her sword to shave his face, saying she’s done it before. Caleb accepts the offer. 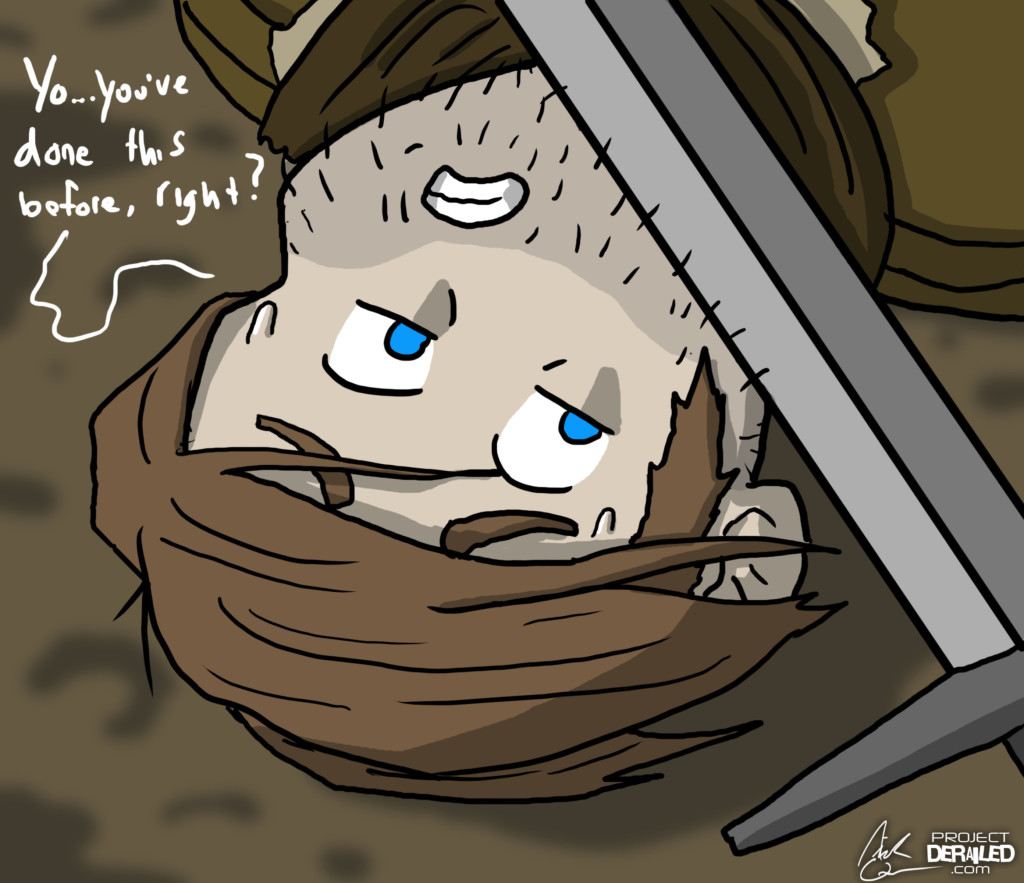 Caleb confirms that this means they are friends. Yasha tells him to relax. He casts dancing lights to give her extra light.

Yasha shaves his face with her greatsword. The shave is a bit uneven, due to the size of the shaving instrument, but she does not hurt him in any major capacity. Jester wakes up, sees what’s going on, and, in a panic, asks if Yasha is killing Caleb.

They start their day by making a plan to investigate the underground safehouse. Fjord swims back through the passageway to the next chamber. He takes note of what lies in the chamber beyond and reports back to the group.

The group hastily makes a plan and journeys into the chamber beyond.

Beau runs up to a group of merrows and attacks. She begins to throw punches, missing some, but landing others. She tries to stun one of the merrows, but she is unsuccessful.

Jester summons her spiritual weapon. She swings it at the merrows and casts toll of the dead.

Yasha runs next to Beau and goes into a rage. She swings once, hitting a merrow, but misses her second attack.

The merrows begin to attack Fjord. The claw into him and one throws a harpoon. He manages to resist being pulled, but he is still bitten.

One of the merrow begins to chant, and lightning shoots from the air above them, hitting Beau.

Jester swings her spiritual weapon. She clocks the merrow and it sinks below the water, dead. She uses toll the dead on another merrow.

Molly swings his swords. He hits one of the merrow twice.

Fjord uses blink to disappear from the battlefield.

Two merrow surround Molly. They spear him with a harpoon. However, under the effects of haste, the other attacks miss the tiefling.

Beau is attacked by the merrow and falls unconscious.

Caleb casts dispel magic and the storm around them dissipates.

Nott casts silent image and makes a wall of stone around Kiri. She looks at the water and sticks one foot in. She quickly takes it out and instead drinks from her flask.

Fjord reappears, using booming blade and hexblade’s curse. He swings, killing another merrow before blinking away.

Yasha, in the water, kills another merrow with a Xhorhasian Necktie. Another merrow appears and hits her with a harpoon. Using the weapon, it pulls her closer and bites into her. She casts healing hands on herself.

Caleb readies his Maximilian’s earthen grasp for when the merrow casting lightning appears.

The merrow reappears, as does a giant cat claw, which quickly restrains the merperson. However, it still manages to cast thunderwave. It hits several party members and knocks Caleb unconscious.

The party moves in on the merrow, surrounding him from all sides. In desperation, he casts a spell that hits Jester and Yasha. However, they still manage to kill him. Yasha quickly rushes over to revive the unconscious Caleb.

Jester calls everyone over and heals them a bit more than they were before.

Caleb hobbles over to the steps. Nott rushes ahead and checks for traps and treasure. She finds some broken pieces of shiny pottery. As she looks, the others rest. Nott mentions that Kiri is still hidden away. Jester begins to frantically look for Kiri. She calls out to the kenku child. She finds Kiri in the illusionary pillar.

Jester warns Kiri that stabbing dead and injured people is fine in dungeons, but probably not in a city where people can see her.

Fjord looks through the goods around him. He finds the symbols of various gods. He also finds a few weapons. He calls Nott and Caleb over to look for magic and traps.

As they go through the things, to Jester’s shock, they find other symbols of The Traveler. Jester says that, to her knowledge, no one else worships The Traveler. Fjord finds a glass eye in a box.

Caleb finds iconography of The Archheart. He takes the one that is the most similar to the symbol he remembers.

Molly finds a ceremonial scimitar made of gold. He guesses it would not hold up in real combat. However, Caleb magically identifies it as a sword that allows its weilder to leap around in combat. He tells Molly it is called summer’s dance.

They see another metal box. Nott opens the box. Inside is a sword handle and hilt. The blade is broken off.

Caleb casts identify on the glass eye. Fjord sits down next to the eye and touches it. His body goes cold and his vision vanishes. His lids itch and his rubs them with his wrist. He opens his eyes to see a starry sky above him. His clothes and his body is different. He sees that he’s a human. In his hand is the eye. There is a flash. Water drips from his falchion as he draws it.

He jams the stone into his guts and absorbs it.

Exhaustion takes over. He falls to his knees. His reflection is familiar, but not his own.

His reflection shifts back to Fjord. The stone is gone.

Everyone else sees Fjord jam the stone into his chest.

He comes back into himself to see his friends pulling him away from the pool in front of him. The stone is gone, and there is no mark to show it had been consumed.

He explains that he knew the man in his vision. He was Fjord’s mentor. A captain named Vendren.

Fjord: “I don’t know what any of this means, but I’m not a fan of losing track of time like that.”

He stretches a bit, but doesn’t feel anything strange. He isn’t sure what happened to Vendren. There was an incident on the ship. An explosion that may have led to the sinking of the ship. This is when he was knocked overboard and magically woke up on shore.

Molly tastes the water in the pool. It’s salt water.

They try to dunk Fjord’s head in the pool. He begins to drown. They pull him out of the pool. He coughs up the water. Jester points out that it’s like he does in his dreams.

They gather their things and bring them back up into the safehouse.

They decide to collapse the tunnels leading to the chamber.

After setting off the explosives, Beau apologizes to Caleb. Caleb goes in for a hug. Beau looks back at Fjord. He beckons her on. Caleb looks back at Yasha, she signals him to pat Beau’s back.

Their hug complete, the party returns to Barrelben. Fjord notices that, in the hilt of his falchion, now resides the yellow eye.

Fiona L.F. Kelly is a writer, editor, and podcaster. She has published numerous articles about all things gaming and pop culture on websites all across the internet, was also a writer for Trinity Continuum: Aberrant 2e, and has been published in books and magazines. She is an editor for the pop culture and media website GeekGals.co. In addition to her writing and editing, she has also been a guest and host on several podcasts. She hosts the Project Derailed podcast Big Streaming Pile, produces and performs on Fables Around the Table, and plays the githyanki pirate Rav’nys on Tales of the Voidfarer. Buy her a coffee: ko-fi.com/fionalfkelly
Previous Post (p) Eating Vegan and Vegetarian at Origins Game Fair
Share
Next Post (n) S2E1 -1: Jane (w/ JESSE THORN from JORDAN, JESSE, GO!)