So, seeing as how my first post on Battlebots was so popular, I decided to give it another shot and turn it into a thing. So, after each round of the tournament this summer ends, I will rank each of the fights from worst to best. Without further ado, this is the sixteen Round of 32 matches ranked from Worst to best! 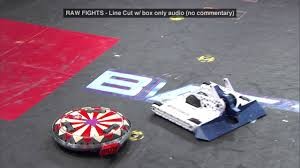 Tragically this match stunk out loud and was pushed to the highlight reel near the end of the show. After Ringmaster and Bite Force’s primary and only weapons stopped working, the match turned into a two minute and thirty second shoving match and since Bite Force was the heavier bot, they took home the victory.

While this short match had some action, it did display two things. First, George Matus is still a few years away from being a competitor in the tournament and two) the drivers and owners of Bronco are absolute jizz cannons. After they clearly defeated the heavily out designed ChromeFly, they showed no class by throwing the robot out of the box and then attempted to destroy Matus’s drone. You already won! Why do you have to be a complete ass hat in the process? It was classless and made a great enemy out of Bronco. But still, fuck off with that bullshit. At least Ray Billings and Tombstone showed restraint against a clearly inferior opponent. 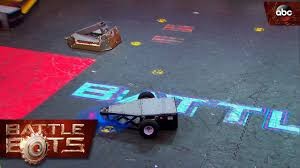 This match was similar to the Bronco vs. ChomeFly match only without people being meaningless pricks. Poor Escape Velocity got lucky to get into the tournament and got destroyed by Tombstone who easily dominated the match. It was short, it was sweet, and it wasn’t much of a contest. 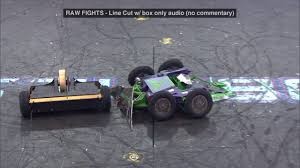 This match was similar to Bite Force vs. Ringmaster in the fact that nothing happened. The one difference that pushed it further than the other is the fact that the two robots primary weapons functioned throughout the contest.

It saddens me to see Nightmare in this tournament. Nightmare was so cool when I was younger. But now… They just do not match up against the much better and sleeker bots out there. But… Even as I say this… They won when they got a lucky break and Icewave broke down in the middle of the match. 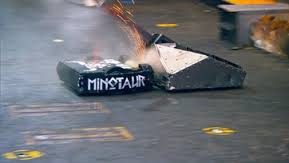 Why did Blacksmith get a wild card? Why is it that much more worthy bots like The Disk O’ Inferno, Ultimo Destructo, and Saw Blaze were passed up for Blacksmith? I’m sorry to Al Kindle and his team… But my god, the bot just doesn’t hold up. It is a decent design but its “flaming hammer” doesn’t work and flies off. The bot was clearly out matched against the awesomeness that is Minotaur and it showed when their bot ended up in flames on the arena floor. 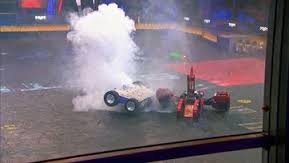 This match was somewhat quick, but gets props for being a major upset and a shocking one at that. Witch Doctor was one of the favorites going into this match in terms of competition and fan enjoyment. But Red Devil was able to puncture their batteries and send the entire arena into a thick cloud of white smoke. It was a cool exit for Witch Doctor and an amazing win for Red Devil. 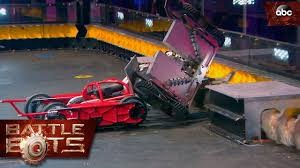 This was another bit of poetic justice given to a bot that, I did not personally feel, should have been in the round of 32. Ghost Raptor was cool last year but got its ass handed to it this year. But Razorback made quick work of Ghost Raptor and punched its ticket to the round of 16. 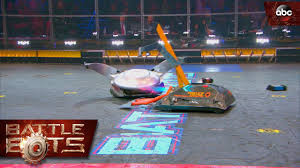 This was another match that, on pure battle value, wasn’t that great. But it gets props for some cool spots such as Warhead spinning on its head and Complete Control going up in flames after Warhead used its own flame on the open gash of Complete Control’s chasse.

07) Son of Whyachi vs. Poison Arrow

This win felt so good. One of the minor complaints I have of Battlebots is the fact that they push some robots to the fucking winds… And then they face the other guys who they barely even mention. Throughout the entire round of 32, all I was hearing is how amazing and awesome the Ewhart Clan was and Poison Arrow? I only heard his name when Faruq mentioned it. So it was so satisfying to see Poison Arrow defeat Son of Whyachi in grand fashion to earn it some respect and notoriety from the clearly picked production favorites. 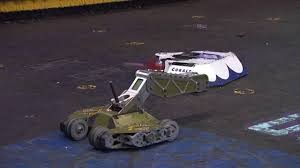 This was a match that was pushed to the highlight reel and it should not have been because this match was phenomenal and showed a great use of strategy on the part of Bombshell. Bombshell, with an adjustable horizontal spinner, targeted Cobalt’s exposed wheels that were above its wheel wells and was able to carve them up, making the robot immobile. This is an amazing bit of strategy and the proverbial Achilles’ Heel of these horizontal spinners that leave their wheels unguarded.

The robot beta and its driver, John Reid are the feel good story of this tournament and I love seeing them every chance I get. John is a sweetheart of a person who is truly blessed to be apart of Battlebots. Beta kicks massive amounts of ass in the arena and showed it when they defeated the MIT lead Overhaul. 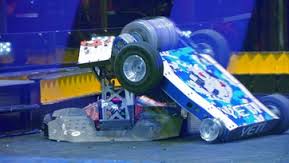 Yeti vs. Lucky was an excellent match that showcased the power of the two robots. Truly a back and forth contest, Yeti proved the victor when his horizontal spinner tore up the flipper of Lucky that, once again, became stuck in the upward position. Yeti is a robot that is all offense and while it may not be winner material, it certainly performed better than even the driver thought it would. Well earned in a tough contest. 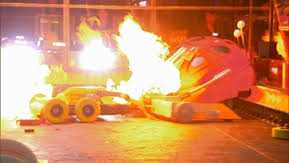 This match made me giddy. I love Lisa Winters and I want her to succeed. While I do think Mega Tento is not the best designed bot, it showed me that there are some major benefits to it. Namely, the fact that the lady bug can operate as a great cushion for the bot itself, making the majority of its damage cosmetic, and the fact that the bot is large enough in a horizontal sense to be lifted by the much more compact lifters. 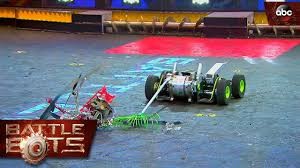 Once again, this was a match that felt so good. After watching, what was clearly a producer fantasy, of seeing Warrior Clan and Son of Whyachi in the Round of 16. Poison Arrow and Hypershock ended up advancing and ruining the story that was trying to be built. Hypershock was perfect and made great use out of a rake, of all things, as a weapon which took Warrior Clan’s drone right out of the air. Then we watched as that drone literally exploded and sent the thing into little bitty pieces. Hypershock’s team is a bunch of absolute nerds and it showed in this match.

This match was absolutely perfect. It had the most story and the most catharsis as the two teams squared off. Eric Nave and his pro America RA RA RA was an absolute prick to Zoey Stephenson and her bot Chomp and it felt so good to see the cocky asshole humbled before the power of Stephenson’s awesome bot. While Stephenson may not go far in the tournament with a top heavy bot, she certainly has proven that she deserves to be in the competition.

Thank you for reading and please like and subscribe for more from us as well as the conclusion of the Battlebots Season 7 tournament!

Tanner Bivens is a political science doctoral student at Northern Illinois University, the host of web series Crit or Miss, owner and operator of Tanner Reviews, and a proud part of Project Derailed. If you want to hear a nerd rant for hours about tabletop RpG, movies, and video games, then look no further than this man.
Previous Post (p) Review: Batman: The Killing Joke
Share
Next Post (n) Critical Role Recap: Episode 61 - "Denizens of the Moonbrush"