Another round in the books and as such another article is merited. The Round of 16 for season 7 of Battlebots was rather good. There was a stinker and a few “meh” matches, but for the most part the field brought their A game leading into the quarterfinals. We got eight fights to talk about so let’s dive right into them, this is the Round of 16 Battlebots matches ranked from worst to best. 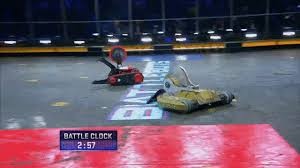 If this were in one of the earlier rounds, it would have highlight reel written all over it. The match showed promise in the beginning… But after Bombshell’s vertical spinner died, it was nothing more than a glorified game of tag between the two as Bombshell avoided the saw of Red Devil. Not even the the commentators could make the match interesting who were struggling to find anything to talk about. It gets slight props for a great first hit and good strategy from Bombshell… But beyond that, it was boring.

This one was a bit more of a contest that had a lame ending. I do not fault Bronco or its owners for this one. While I was, and still am, salty about how they treated ChromeFly, this made legitimate sense. After a one in a million shot that left Razorback balanced on its side with no way to self right, Bronco decided to back off and let Razorback get counted out much to the dismay of Razorback’s owners. The match was small and the action was somewhat controlled before the lame but logical finish. 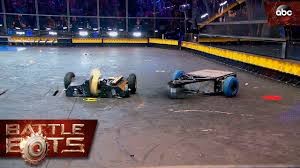 This match was okay. It ended in an expected fashion. Tombstone tore Brutus a new asshole and Brutus, who only had some special effects gun and a vertical spinner to its defense was quickly torn up by Tombstone’s horizontal spinner. It was quick and it was good, next match. 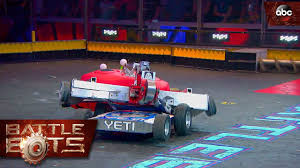 The same thing can be said about the Yeti and Mega Tento match that was said about the Tombstone and Brutus match. It wasn’t anything to write home to mom about, but it certainly was a good match and showcased the amazing all go no quit style that Yeti has become known for. Lisa Winter and Mega Tento put on a valiant effort, but ultimately it was for not. 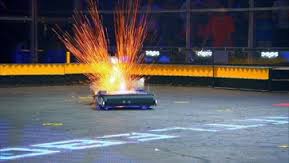 This one was pretty much a foregone conclusion. Minotaur is such an amazing bot and while Warhead is good, they didn’t stand a chance against that powerful drum spinner. The match was short, but certainly entertaining thanks to Warhead’s amazing flames and Minotaur decapitating the spinner of Warhead made for a great quick bout.

This was a match that was dripping with historical troubles and underdog coming from behind. Poison Arrow is a bot that has proven to be the little engine that could. It defeated Son of Whyachi in spectacular fashion and then took down Hypershock more thanks to Hypershock’s design then through battle. Hypershock had control of the match until their drive train gave out, shades of their exit last year. At that point, Poison Arrow went in for the kill and didn’t stop until their foe was done. It was a good surprise, heartbreak for Hypershock, and an advancement to the round of 8 where Poison Arrow takes on Bombshell. 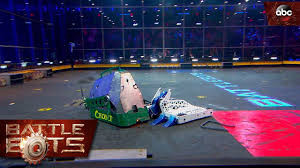 For anyone who has anything bad to say about Zoey Stephenson and Chomp, I am going to point you straight to the fact that Chomp has had two matches that have been solid and enjoyable classics and then laugh at you. Sure the bot is top heavy and probably will not get past Yeti in the next round, but the thing is certainly effective and has been effective all the way to the round of 8. Chomp and Bite Force had a great match that saw Chomp target the exposed weapon well of Bite Force to great effect. This disabled Bite Force’s vertical spinner, thus leaving it in another none primary weapon match up. While Bite Force did get some decent offense in by pushing the top heavy Chomp around, it was Chomp that easily took home the victory and moves on in the tournament. Top marks for Chomp!

I have been hard on Nightmare in the past, but I feel like I need to take back a lot of what I said. Nightmare may be a poor design in today’s match ups… But damn it can put on a good show and it and one of my personal favorites, John Reid’s beta, tore down the house with an amazing series that went to the last possible second. After Nightmare disabled the hammer of beta, it looked like it was all over for the bot from Oxford, UK. But then beta, through amazing driving, was able to flip the bot that could not self right to great effect. This saw beta win in a literal last second effort and move on to the round of 8 where they square up against Tombstone.

Thank you for reading, please like and subscribe for more from me and those at Project Derailed!

Tanner Bivens is a political science doctoral student at Northern Illinois University, the host of web series Crit or Miss, owner and operator of Tanner Reviews, and a proud part of Project Derailed. If you want to hear a nerd rant for hours about tabletop RpG, movies, and video games, then look no further than this man.
Previous Post (p) Critical Role Recap: Episode 64 - "The Frigid Doom"
Share
Next Post (n) Top 5 Reasons Why No Man's Sky is the Worst Video Game of this Generation