First off, I am going to level with you guys: If I said I didn’t start out writing this post by Googling “how to write a blog post” it would be a bold-faced lie.  Here at Derailed we have been tossing around the idea of all of us (Tom, Fiona, and myself) posting weekly blogs here on DerailedGames.com about various topics all, at the very least, tangentially related to tabletop gaming. Now that we are in the wake of our local convention season we figured now is as good a time as ever to start with the whole blogging thing.

I have the incredible honor of delivering our very first blog post today, marking the beginning of the trend of me throwing my inane ideas and arbitrary words at your face every Wednesday!  Fiona will be posting on Fridays. I don’t know what she plans to write about first but if it isn’t about either cosplay or nerdy nail polish I will be Stunned (1d4 rounds, DC16 Will Save ends). It’s Tom’s job to brighten your every Monday.  Last I heard he plans to kick things off with a look into our game design process we call “Impressionistic Game Design.”

But enough about blogs yet to be! Two paragraphs in and I should probably get to the meat of what THIS post is about. Well, as Derailed Games’ resident artist, I feel like it is only fitting that I talk to you about illustration! If you are anything like me, getting to create and “become” a completely original character is one the best parts of playing a roleplaying game. And if you are even more like me (and, honestly, who could blame you?) you enjoy being able to see, and show others, what your character looks like. Drawing (or having someone draw) your character can be just as useful as the actual written backstory and illustrating characters is one of my favorite things to do.

A character’s backstory is a staple of most RPG games. The GM will often mandate that a write-up of variable length or detail get sent to him describing who your character is and outlining what feats he or she has done in the time leading up to the current campaign setting. While many people will knock out this out before even thinking about what their character looks like (almost always the night before the first session), I tend to put away the dice after rolling stats and start drawing. I find that I can develop my character’s personality and background visually as I develop their appearance on the page, then go and write it all out in a backstory after that.

When I do commissioned character art or character art for friends I obviously encourage them to describe their character’s appearance as detailed as possible.  If your character has their hair braided in a specific way or their armor is adorned with the sigil of their father’s noble house I will make sure those details hold true in my final drawing. But a character drawing is much more than a character’s physical appearance and the clothing and gear they are carrying. I always have them describe their character’s personality as detailed as they can. More specifically, I have them answer the question: “What do you think other character’s first impression of this character would be?”

Seeing an illustration of a character for the first time, without knowing anything about their backstory is not too terribly different than an in-game NPC or other PC meeting this character for the first time. You mostly just have their appearance to go on. What they wear, and the way the carry themselves. I always take great care to insure that my illustrations achieve the same general effect, conveying small details about that character without anyone ever needing to read the backstory. A facial scar from a battle years ago, a bow decorated with specific tribal carvings, a confident stance despite tattered and broken gear. These things allow you to make inferences about that characters personality and past.

A character drawing can literally be a character bio written in body language. When framing up the characters general shapes I am taking into account what that characters attitude might be. If they are in a relaxed stance, shoulders back, chest out, I can assume that it is a confident or charismatic character. A character slightly hunched forward with a wide stance might be jumpy, or always combat ready. Even the nuanced details like where they limbs rest, loosely at the sides, on the hip or a hilt of a weapon, says a lot about that character’s personality.

As I add detail, facial expression will also go a long way to illustrating not just what a character looks like but who that character is. In life many people, with many different personalities, make many many different facial expressions over the course of a day. It is important to choose an expression that best exemplifies that characters personality.  A sly smirk my best befit a cocky rogue, or hotshot wizard, while a dour grimace best suits the stoic dwarf or strict paladin.Once you have an idea of what your character’s overall personality is, it is important to choose an expression that conveys that personality as much as possible. 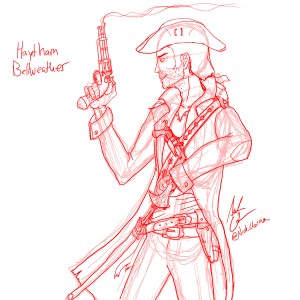 When everything is said and done you will have an accurate rendering of your character that not only illustrates what they look like, but also establishes their personality before anyone even begins to think about trudging through your eight-page long backstory written in first person pirate-speak….not that anyone would ever think to do that, especially for their super awesome Gunslinger Pirate captain character…

Okay, fine. It was me. I regret nothing.  Argh.

If anyone has been paying attention to any of the Derailed Games social media accounts you will probably know that we are involved with an event called the Penn-Ohio Roleplayathon organized by our friend GuildmasterDan. The event has teams play RPGs and other tabletop games for 24 hours straight for a good cause. This year we are raising money to help our fellow gamer and friend Vijay Welch-Young with is recovery from non-Hodgkin’s lymphoma. If you want to help out you can donate HERE via PayPal. Or stop out to All American Cards and Comics in Boardman, Ohio Saturday, November 22nd at 10am to Sunday at 10am to check out the teams and support the cause.  Or check out the FACEBOOK EVENT for more information. Myself and Tom are Co-DMing a completely original two-table expedition based D&D 5e game![/fusion_builder_column][/fusion_builder_row][/fusion_builder_container]

Nick is a social media marketing professional and content creator by trade but also dabbles in everything from graphic design, photography, illustration, videography & video editing, animation, and podcasting. He is the Co-Creative Head at Derailed Medial LLC, the creator and Dungeon Master of the ENNIE-nominated podcast Tales of the Voidfarer and cast member on Cape Chronicles and Fables Around the Table.
Previous Post (p) Dungeon Design
Share
Next Post (n) Game Like a Girl
Nick Uroseva (@Nick_Uroseva) 2016-05-05T03:35:42-04:00